Is that the best way to prove that you're not, as the Times columnist said, "queen" of the "mean girls?" 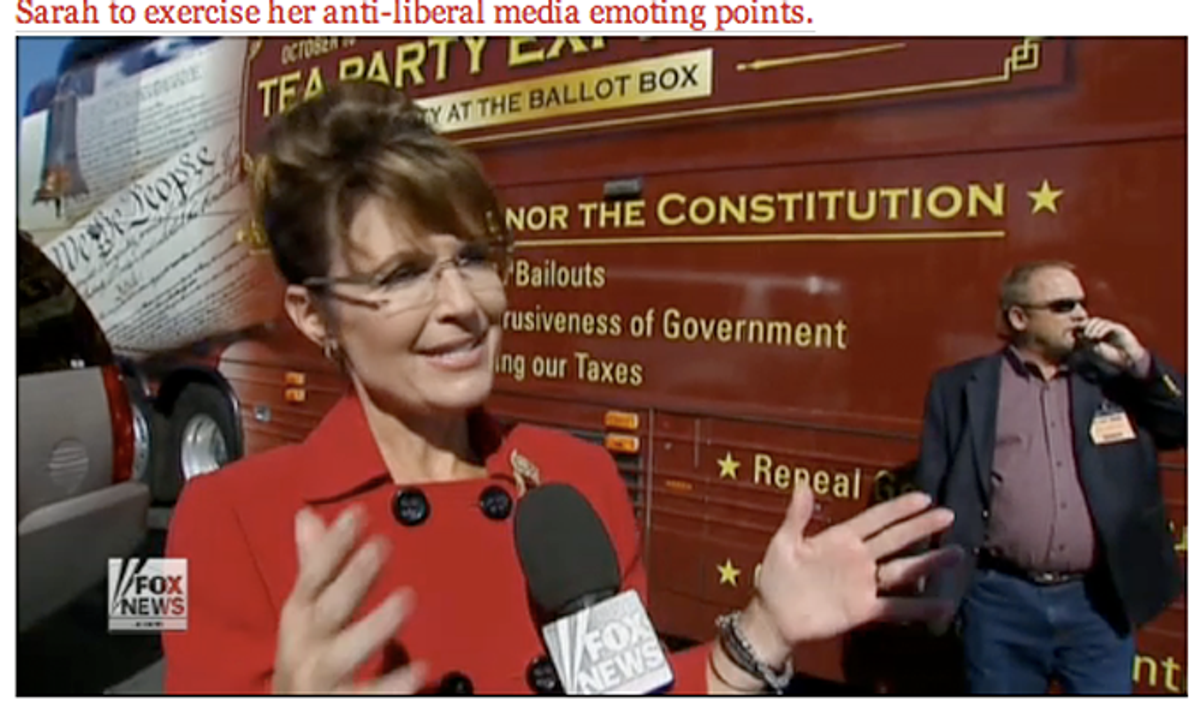 It was not until mid-2009 that Maureen Dowd discovered that Sarah Palin was not actually a charmingly "dynamic" leader, but rather a monstrous totem of ressentiment made animate. And so now, every so often, Dowd makes some crack about Palin in her New York Times opinion column. Last Sunday, Dowd called Palin "Queen Bee" of the "Republican Mean Girls," because Dowd can rarely think of an effective insult that isn't based in her essentially misogynist world-view.

That was just an aside in a column mostly about the Nevada Senate race and Sharron Angle's calls for Harry Reid to "man up."

(It's rich -- oh, so rich -- for Maureen Dowd to criticize anyone for leveling emasculating attacks on the manhood of liberal politicians, considering that that is Dowd's trademark.)

But that aside was sufficient excuse for a Fox reporter to encourage Queen Sarah to exercise her anti-liberal media emoting points.

You can see Palin grin (around two minutes in) as the reporter sets her up:

Reporter: "You mentioned slander. Maureen Dowd, columnist for the New York TImes, called you the 'queen bee of the mean girls,' and named several conservative Republican women, Meg Whitman, Carly Fiorina, Governor Jan Brewer -- how do you respond to that?

And she knocks 'em down:

That's so funny, 'cuz I don't think I've ever met that gal, Maureen Dowd -- O'Dowd -- whatever the heck her name is.

I don't think I've ever met her, and I don't think -- she probably hasn't met Jan Brewer or some of these other wonderful, pleasant, gracious, nice, hard-working mama grizzlies who are wanting to turn this country around.

And that is Sarah Palin's response to being called a "mean girl." She intentionally botches a name she obviously knows, pretending the insulter is so below her station that she can't be bothered to remember which Irish broad committed the offense.