Where the Tea Party will kill the GOP 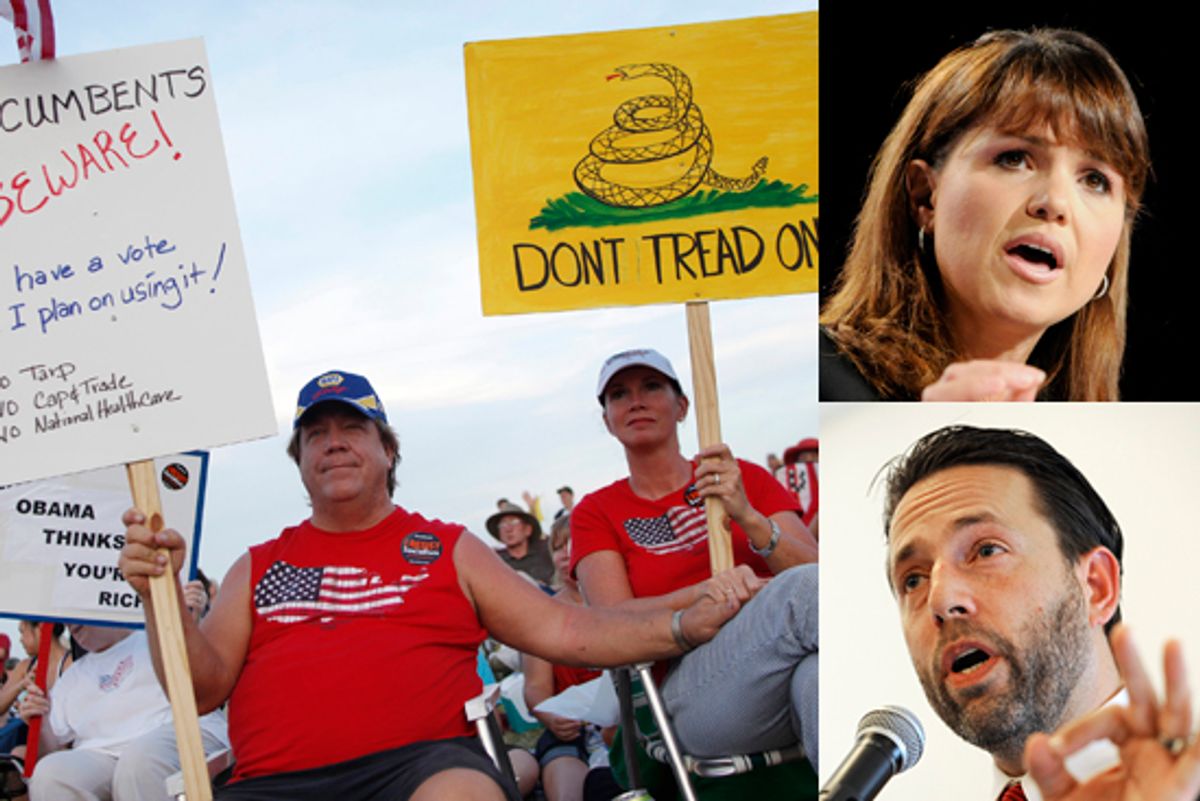 When you look at the map, it's not hard to imagine Republicans getting awfully close to the 51 seats they'll need to take control of the Senate. Right now, they have 41, but you can pretty much pencil in pick-ups in North Dakota, Indiana, Arkansas and Wisconsin (sorry, Feingold fans), bringing them to 45. That would leave them needing to win six more for an outright majority, with eight potentially ripe Democratic targets left on the map. So it's within reach for them.

But that's before you consider the Tea Party effect. As we've been noting for months, the GOP's restive base has nominated a series of ticking time bomb candidates in key races -- unseasoned politicians whose odd backgrounds, extreme views and penchant for polarizing rhetoric were all likely to test swing voters' desire to cast their ballots for the GOP this year. Now, two weeks from Election Day, it's becoming clearer which Tea Party candidates are most likely to blow winnable Senate races for the GOP -- contests that are crucial to the party's hopes of winning back the chamber. Here, in descending order, are the five Tea Party Senate candidates most likely to kill the GOP:

5. Rand Paul (Kentucky): Paul leads his Democratic foe, Jack Conway, by an average of 5 points in recent polls, according to Real Clear Politics. Given Kentucky's conservatism and the state's longstanding aversion to Barack Obama, Paul is still likely to win this race. But that we're even talking about it this late in October tells you all you need to know about the effect Paul -- who kicked off his general election campaign by questioning the Civil Rights Act of 1964 -- has had on swing voters. Conway's campaign is attempting something of a Hail Mary with a new ad about Paul's "Aqua Buddha" collegiate antics. There is serious backfire potential here (nationally, liberals are enraged that Conway would use a tactic more commonly associated with GOP strategists), but if the ploy succeeds, Conway just might pull this race out. The seat is now held by the retiring Jim Bunning, so a Conway victory would actually represent a net gain for the Democrats -- which by itself would probably end the GOP's majority dreams.

4. Joe Miller (Alaska): The news today is that Miller has reversed himself and admitted that he was, in fact, disciplined for ethics violations while working as a borough attorney in 2008. The news yesterday was that Miller's private security team arrested and handcuffed a reporter over the weekend. All of this came  a few days after Miller's declaration that he wouldn't answer any questions about his past. You can probably see the problem here: This race is rapidly turning into a referendum on Miller, an unknown gadfly before his surprise win in the August GOP primary. For now, Miller is being fortified by Alaska's conservative bent (it may be the most GOP-friendly state in the country) and by the presence of two opponents: Lisa Murkowski, who is running a write-in campaign after losing to Miller in the primary; and Democrat Scott McAdams. Democrats can take heart in the memory of 1994, when a three-way race lifted their gubernatorial candidate, Tony Knowles, to a narrow victory -- even though the national climate was as anti-Democratic as it is this year.

3. Ken Buck (Colorado): When he won the GOP nomination in August, Buck, a Princeton-educated district attorney who previously worked on Capitol Hill and in a U.S. attorney's office, seemed more polished and marketable than most other Tea Party candidates. Then came Sunday's nationally televised debate and his declaration that homosexuality is just like alcoholism. This came a few days after questions were raised about his handling of a possible rape case as district attorney. Colorado is a swing state, and one that is ready to break for the GOP in a climate like this year's. But with the noise he's now making, Buck is is severely testing voters' limits. Polls show an essentially even race between Buck and Democrat Michael Bennet; one more flare-up could put Bennet over the top.

2. Sharron Angle (Nevada): It's funny what a few days can do. After last Thursday's debate, Angle seemed on the verge of breaking away from Harry Reid, who turned in a dreadful performance that seemed to confirm every negative judgment voters have made about him. But then Angle went and told a group of Latino students that some of them look "a little more Asian" to her. In her debate with Reid, Angle had managed to make herself seem (relatively) mainstream -- which is pretty much all she has to do to win this race. But the stir the latest comment is causing could easily undo all of the benefit she got from the debate. If Reid wins this race, it will be by a microscopic margin. But Angle is doing just about everything she can to get him there.

1. Christine O'Donnell (Delaware): What more needs to be said?