The twisted ethics of "Teen Mom"

The hit MTV reality show may be the most accurate depiction of young parenthood yet, but should we be watching? 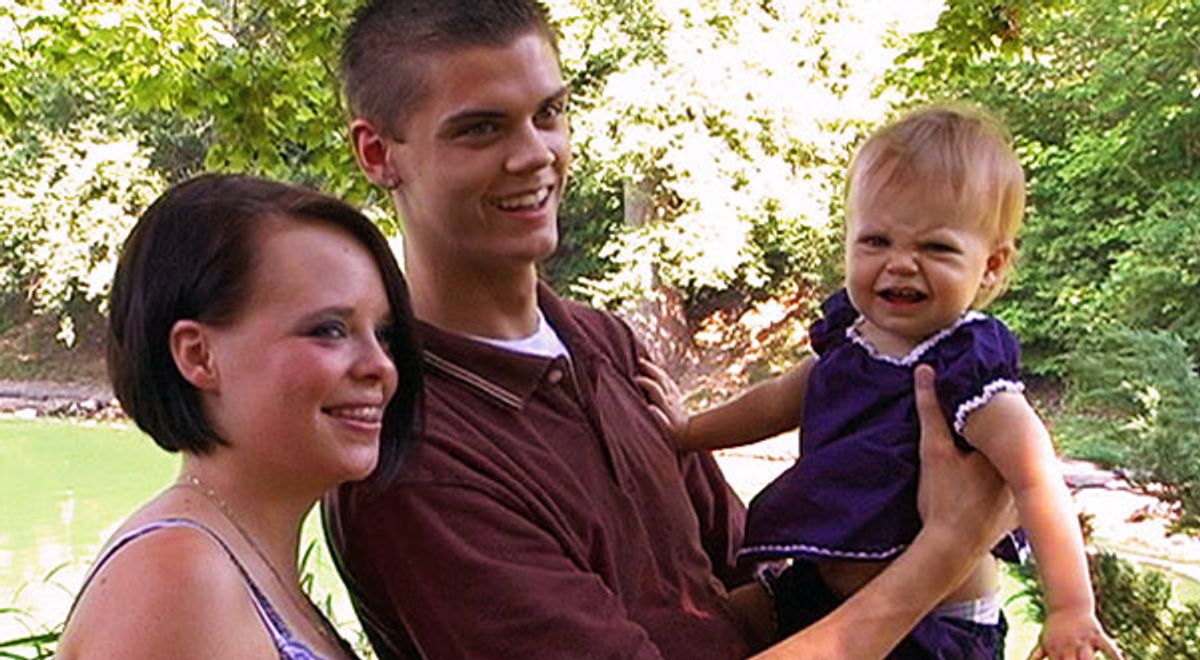 "Teen Mom's" Catelynn and Tyler pose with their birth daughter, Carly, whom they gave up for adoption.
--

Tonight, MTV will conclude its second season of "Teen Mom" in the same way it wrapped the "16 and Pregnant" series that introduced us to the four girls in the first place. They'll bring in Dr. Drew, therapist to the stars, who will explain what it all means, or at least ensure that the hottest issues brought up this season -- including domestic violence (both incidents, interestingly enough, perpetrated by women), unprotected sex, and of course, having a kid in the first place -- are dutifully acknowledged and packaged with the proper warnings and hot line numbers so no one can accuse the network of condoning such behavior to its young audience. And thus far, the network has been validated. A recent study showed that, far from "glamorizing" teen pregnancy, watching the show has made most teens less likely to want to become teen parents.

But what is "Teen Mom" really teaching us? And what does its popularity tell us about our current moment?

The sober reality show has been a surprise hit for MTV, a channel that seemed one Jell-o shot away from a life-long coma, and heroines Catelynn, Maci, Farrah and Amber have graced the covers of tabloids all season long. (Maci's back with her baby daddy! The details behind Farrah's boyfriend's tragic demise! Exclusive photos from Catelynn and Tyler's tearful reunion with baby Carly!) Cynically speaking, the cast members of "Teen Mom" are nearly perfect lab specimens for a tabloid: They have youth, beauty and baby bumps. They also have exes, family drama, incarcerated parents, adorable toddlers -- and, frankly, they need money. The show has caught on not only with MTV's core teenage audience, but also with 20- and 30-something women. In an age when the American middle class is once again obsessed with perfectionism in parenting, some may be sucked in by the novelty of young mothers raising children with so few resources. Others are simply sucked in by the nonstop drama and soapiness.

These girls' high visibility upends history. Teen mothers were always shoved to the back of the frame, often literally sent away, and certainly rarely given the spotlight. And those stories that are told are incomplete: Too often, tales of teen parents start and stop when one is 16 and pregnant, and neglect to tell the story of what it's like to be 19 with a 3-year-old or 26 with a 10-year-old. "Teen Mom" goes further than most any show ever on television in documenting ordinary struggles of young parenthood.

This season alone, it showed us the ambivalence and embarrassment of Maci, a Tennessee girl from a middle-class family, as she asked her son's father, Ryan, for child support, and took us into a riveting meeting with their mediator, in which they bargained for time with their son while Maci wept. Catelynn and Tyler -- high school sweethearts from hard-drinking, hard-living parents who gave their daughter Carly up for adoption in hopes of creating a better life for her -- might represent one of the most sympathetic portrayals of birth parents ever committed to film. They're a graphic reminder that for the parents left behind, the grief doesn't end when the baby leaves the frame, even when it feels like the right decision. One of the season's most poignant moments was Tyler -- a tough teenage boy who had cried over pictures of his daughter alone in his bedroom, who had a father in jail, who kept promising his girlfriend they would be better parents to their own children someday -- sitting in a diner across from Brandon, the man who was what he most wanted to be: Carly's father. And rather than detail his own pain, Tyler, in a lovely moment of empathy, asked Brandon what he had sacrificed to be a parent.

Then there is the on-again, off-again couple Amber and Gary, who have become the id of the series, confirming the worst stereotypes about teen parents. This season we saw portly, passive-aggressive Gary toy with the idea of leaving volatile Amber for another teen mom he met in the diaper aisle at Walmart; we saw screaming fights, one of which concluded with Gary taking the sheets off the bed, another that included a car chase with the baby on board; we watched Amber moving in with her new boyfriend, fresh from work release in jail; and finally, we saw Amber, who has been taking martial arts classes, beat Gary and kick him down the stairs. But the most haunting moment came when we saw their little girl, Leah, witnessing yet another fight between her parents, and telling her mom to be quiet -- in just the same tone we've heard Amber use toward her all season long.

But if ever a documentary has been accused of distorting its subject matter, "Teen Mom" is it. The idea of tracking the experience of being a regular teen mom pretty much evaporates the second that mom is on the cover of OK! magazine. And the tabloid money does matter, in no small part, because one of the biggest arguments against teen parenting is that it creates poor families, and thus any realistic portrayal of teen parenthood must scrupulously follow the money: How much is it, and where is it coming from?

Three seasons in, it's easy to become distracted by niggling details that may or may not reflect how much impact the show has had on each family's personal finances and relationships: Why does Farrah spend so much time in the beauty shop? Why does she have a new Mac laptop? What make and model car are the girls driving? What part of town are they living in? I absolutely do not mean to imply that these girls, some of whom come from middle-class families, and all of whom support themselves to varying degrees through jobs and financial aid, are not entitled to support their families, or buy themselves hair cuts or computers. (Interestingly enough, the only mention we've seen of government assistance is when Farrah files for Social Security from her daughter's dead father, and when she receives aid for day care, due not to her income, but to her mother's domestic violence conviction). But if these families are meant to make a larger point about teen parents as a group, it profoundly matters to know not just if they are managing to survive, and eventually maybe thrive, but how. Yes, there are many different ways to succeed or fail as a teen parent, and very few have tried to ask the right questions. The answers can include school, family, jobs and good parenting. But once the options include "sell your family's story to a tabloid," you've pretty much polluted your sample.

Aside from the issue of who is paying for what, canny viewers may wonder just how much these families' characters and images have been shaped by producers at a painstakingly edited show. This season, Maci and Farrah have seemed the most realistic and complicated characters, while Amber and Gary have started to look downright villainous. And it may be worth asking why Catelynn and Tyler, the only couple to release their child, seem consistently the most sympathetic characters in the show. Also, one wonders if the very act of exposing their lives before a national audience might have made all concerned more likely to solve their problems in the offices of counselors, mediators and therapists, and participate in therapeutic retreats -- or to take it even further, to wonder whether many of those sessions would have happened at all without outside intervention.

Creator Morgan J. Freeman says he wants to capture these same girls and their families each year, not unlike Michael Apted's "Up" series, a landmark of documentary filmmaking, in which British schoolchildren from different social classes, born in 1964, have been filmed every seven years since the age of 7. It is a laudable goal, and 21 years after giving birth to my daughter at age 16, I would dearly love to see a series that depicts all of the different ways these stories can turn out. But putting aside the ethical dilemmas, it becomes valid to ask: What are you documenting? Has the series already passed the tipping point after which they are no longer capturing the lives of teen moms, and instead are looking at the lives of young celebrities who happen to have young children?

We saw this with "Jon and Kate Plus 8," which morphed gruesomely from a show about their family in which cameras happened to be present into a show about their family breaking up, thanks to the pressures of the cameras. The reality TV fame cycle is so well-established that one might speak of a series as having a half-life of sorts -- the amount of time it takes for the show to go from publicly documenting people's ordinary lives to documenting the private lives of public figures. In the case of "Jersey Shore," it seemed like a matter of weeks.

Each season, with "Teen Mom," it becomes more difficult to tease out the impact the show itself has had on the lives it depicts. After the episode in which Amber beat Gary aired, the producers were criticized for standing to the side during an incident of domestic violence (one also wonders if they would have done so had Gary been the one hitting Amber). But the most chilling moment was hearing Leah speak. Not merely because we could hear echoes of her mother's words in her own, but because by hearing her speak, it forced us to scroll back and replay all the earlier scenes we had witnessed thus far from her childhood, and realize that she was no longer an infant. She is a real girl, who is old enough to understand the trouble her family is in, and we are watching it. It makes me wonder if reality TV, in a way, might be creating a whole mini-soccer-team of Mary Kate and Ashleys (minus the extravagant amount of cash), children who literally begin their lives on TV and stay there throughout infancy, childhood and maybe young adulthood. The further this series goes on, the more difficult it will be to separate what it is telling us about the lives of teen mothers from what it is telling us about the lives of parents and children who live under public scrutiny.