The pill that seriously kills your sweet tooth

The Sugar Destroyer blocks the ability to taste sweetness. It doesn't taste good, but it does make food fascinating 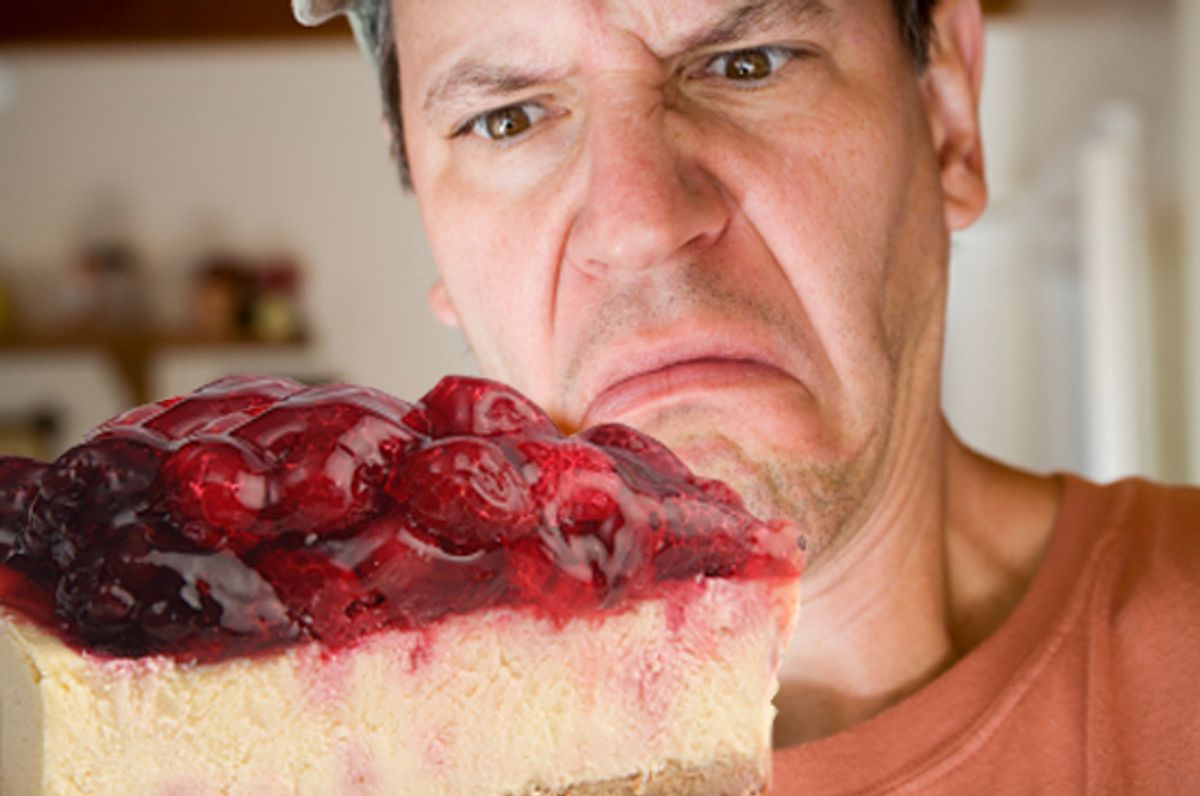 Last week, we had a little fun partying with* Miracle Fruit, which tricks your taste buds into thinking that sour things taste sweet. Tra-la-la! Isn't life grand, all rose-colored glasses, when you can nibble on a lemon and have it taste like candy? Unicorns and ponies and kitty kitty kats yay!

But then -- boom! -- here comes Miracle Fruit's evil Bizarro-twin brother, Gymnema Sylvestre. Yes, that's right, he's so bad he doesn't even need a name you can pronounce. And his magic power is similarly antisocial: A little sprinkle of his putrid powdery self on your tongue, and you will lose the ability to taste sweetness. Which means that Coke will taste only of its flavoring agents, oranges will taste as sour as lemons, and sugar won't taste like much at all.

If you're thinking that doesn't sound very delicious, well, you're right. But the ability to turn off one of our tastes offers a unique look into how we respond to the others, how important sweetness is to flavor, and, conversely, what we can taste in food once the masking effect of sweetness is taken away.

To give this a whirl at home, gather together some foods or drinks that you instinctively think of as being sweet, and ones that have a fair amount of sugar that you don't really notice. (I'm looking at you, supermarket bread with your corn-syrupy insides.) I highly recommend you at least include some regular old white sugar in your tasting.

Get some of your more curious and/or masochistic friends to come around and grab your bottle of bought-on-the-Internet Gymnema Sylvestre, also known in its native India as the Sugar Destroyer. (How heavy metal is that? Chung-chung!)

Now, give the items on your bizarre buffet a taste, noting when and how much you notice the sweetness, when you notice other tastes (Salty? Sour? Bitter?), and what flavors you can discern (does the chocolate taste like coffee, vanilla, caramel, etc?).

Now open up your Sugar Destroyer capsules and dump the powder directly on your tongue, swishing it around and letting it coat as much of the inside of your mouth as possible. There is a term for the taste of this stuff, and that term is straight-nasty. As Dave Arnold of the French Culinary Institute says, " I’m not going to lie to you, it is unpleasant. Just do it. You’re shooting for enlightenment. Keep the stuff on your tongue and swirl it around your mouth. Don’t swallow it right away. Did I mention it tastes bad? Stop complaining." My tip: Try to hold your breath while swishing the stuff around. Breathing will only make you smell its musty funk.

Once that's over, reward yourself with a sip of water and a nibble on a slice of bread or a cracker to help get that dirty, dirty flavor out of your mouth. Now you're ready to get sugar destroying! (As with the Miracle Fruit post, if you're planning on having your own tasting, I might suggest skipping my tasting notes below so you have your own impressions.)

Sugar: Like melting sand! The sensation of sugar crystals dissolving on the tongue with essentially no taste means we're really in business. Though I do swear I can detect something stale and papery, which may say something about my subject acquisition methodology. That is, to steal a fistful of sugar packets from the deli downstairs.

Sweet'N Low: You know how there are people who can't stand to be within five feet of artificial sweeteners because they think they're so bitter? I'm not really one of those people, because I can suck down Diet Coke like it's mother's milk. But without its sweet mask, saccharine dissolves into a thick, metallic bitterness, one I've never really noticed before. Ick.

Milk: Sugar-destroyed milk was one of my favorite finds, not necessarily because it's delicious (it's not bad), but because of how many different flavors I found in it. At once sort of salty, savory, it has lots of subtle, interesting minerally and grassy characteristics, which make sense because, well, it's full of minerals and cows eat grass. I had no idea sugar was so prominent in how I taste milk, and how much that sugar hides.

Ice cream (vanilla): I honestly expected this to be kind of nasty, but it was surprisingly lovely. I tasted a little saltiness I would have never noticed before, but with the rich roundness of cream and the floral, brown flavors of vanilla, there was so much that suggested "sweet" that my brain may have automatically inserted the taste in for me. Can that even happen? I mean, when the brain insists on certain things, it will make them happen. And my brain insists that ice cream is delicious, Sugar Destroyer be damned.

Steamed white rice: This was another fascinating one. Obviously I don't think of rice as being sweet, but it has lots of simple carbs which readily turn to sugars. And so tasting this was an odd experience of finding nutty, bran-type aromas, and a flavor almost like popcorn. Who knew rice was so intriguing?

Coke and Sprite: I once read somewhere that the flavor formula for Coca-Cola is mainly a blend of citrus. It blew my mind, because its flavor is so distinctive, so Coke, that it never occurred to me that it could have any reference in the natural world. But now, I can sort of see it, along with the slight bitterness of citrus peels. On the other hand, the "lemon-lime" flavor of Sprite is so clownish, so goofily ham-fisted, it doesn't taste like either but more like a cartoon version of fruit.

Apples and oranges: While we're on the subject of fruit, a big lesson I learned today was really how much we rely on sweetness to indicate "goodness" in fruit. Before I sugar-destroyed my tongue, the apple and orange I had were perfectly wonderful -- sweet and tart in perfect balance, with plenty of aromas, juice, flavor …  you know, fruitiness. But just take away the sugar, and it was like everything else fell flat, too, like they were told to sit in the corner and keep quiet. We put them away for a little bit, and once I got my sweet receptors back, I gave them another try: delicious. So weird.

Dark and milk chocolate: I expected dark chocolate to basically taste like baking chocolate, which is a candy-hungry child's worst nightmare -- you expect a sweet bite off a big mouthful, and get something bitter and maybe even sour. But instead, the dark chocolate didn't seem to do much at all on the tongue, just a sort of waxy lump that melted away. But then it started to kick in a little bit with that bitterness, that fruitiness, that roastiness of nice chocolate. Why the delayed reaction, I wondered. Then I remembered that even though I wasn't tasting the sugar in the chocolate, it was still there, making up nearly a third of the bar. I wonder if the delay in flavor is because the sugar dissolves first on our tongues while the chocolate is still busy melting and giving up its scent? The milk chocolate had a similar effect, but its flavor seemed fuller, richer, rounder, and I wonder if it's because the milk fat helps to carry the aroma of chocolate even better than its own cocoa butter.

Honey: I have to admit that I am a little bit of a honey snob. If it's just the regular stuff, I much prefer the clean, simple sweetness of sugar to the biting, almost hotly intense taste of honey-bear honey. So for this test, I broke out some fancy Italian honey that's the color of molasses, and it was super-grown up: teasingly bitter, like wood in a complex, sophisticated way.

Apple pie: Yes, I sacrificed a slice of apple pie my special ladyfriend made to the yaw of sugar's Kali Ma. But, like the ice cream effect earlier, between the butter, tartness and cinnamon, it was like my brain couldn't accept that this pie wasn't sweet, and autofilled it in to some degree for me. So it was weird, but not entirely undelicious. Interestingly, perhaps because the sweet wheatiness of the pastry was missing, the crust tasted just crazy buttery. I mean, my baby does it right!

As with last time, if you've played with, or plan on playing with the Sugar-Destroyer, let us know what captivated you in the comments, or e-mail me: food (at) salon (dot) com.

* Isn't "to party with" one of the dirtiest phrases in English? Try this: Imagine your girlfriend or boyfriend describing a person you don’t know as "just someone I used to party with back in college." Tell me you don't feel a little queasy now.