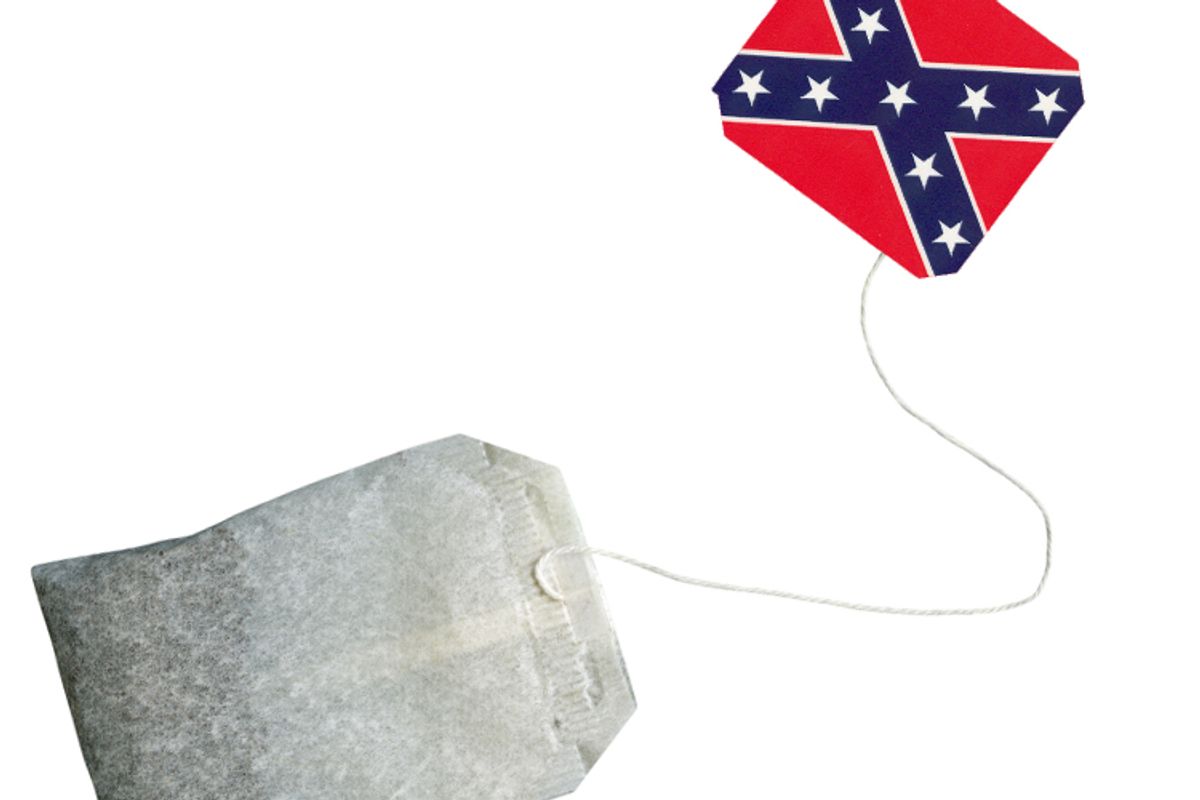 The NAACP, which has been feuding with the Tea Party since (at least) July, released a 10o-page report today documenting links between "certain Tea Party factions and acknowledged racist hate groups."

The report, prepared by the Institute for Research & Education on Human Rights, contains no major revelations, and it focuses too much on a group called ResistNet, which does not seem to hold a particularly prominent place in the Tea Party tableau. That said, the many examples of  Tea Partiers giving fringe (non-Tea Party) figures a platform, and of being linked to extremist groups, together form a picture that is fairly compelling.

Here's a typical anecdote from the report:

The list of out-front anti-Semites on Tea Party platforms includes an event in July 2009. One thousand people gathered in Upper Senate Park for a rally in D.C. A full line-up of speakers included representatives from several tax reform groups, FreedomWorks, and talk show hosts. Also on the platform that day was the band Poker Face, playing music, providing technical back up, and receiving nothing but plaudits from the crowd. The band, from Lehigh Valley, Penn- sylvania, already had a reputation for anti-Semitism. Lead singer Paul Topete was on the public record calling the Holocaust a hoax, and writing and performing for American Free Press—a periodical published by Willis Carto, the godfather of Holocaust denial in the United States. According to Topete, “The Rothschilds set up the Illuminati in 1776 to subvert the Christian basis of civilization.” Because of their bigotry, the band had been kicked off venues at Rutgers University in 2006 and a Ron Paul campaign event in 2007. But they made it to the stage of the Tea Party without any questions asked.

The report also alleges that, "Five of the six national [Tea Party] factions have these 'birthers' in their leadership; the only exception being FreedomWorks." For example:

For example, in October 2008, before the election, Amy Kremer, who later became a figure from both Tea Party Patriots and Tea Party Express, wrote of Sen. John McCain: “...he needs to tell Nobama to bring his authentic birth certificate to the debate. I am so tired of the spin from his spinmeisters! Johnny Mac...just go straight to the source!” This sentiment was coupled with a profound alienation and distrust of established American institutions. On January 8, 2009, she wrote: “I have lost all hope on this issue of OBami’s eligibility to be President of the United States. I am totally disillusioned after sitting and watching Congress certify the Electoral College vote on CSPAN without one objection.”