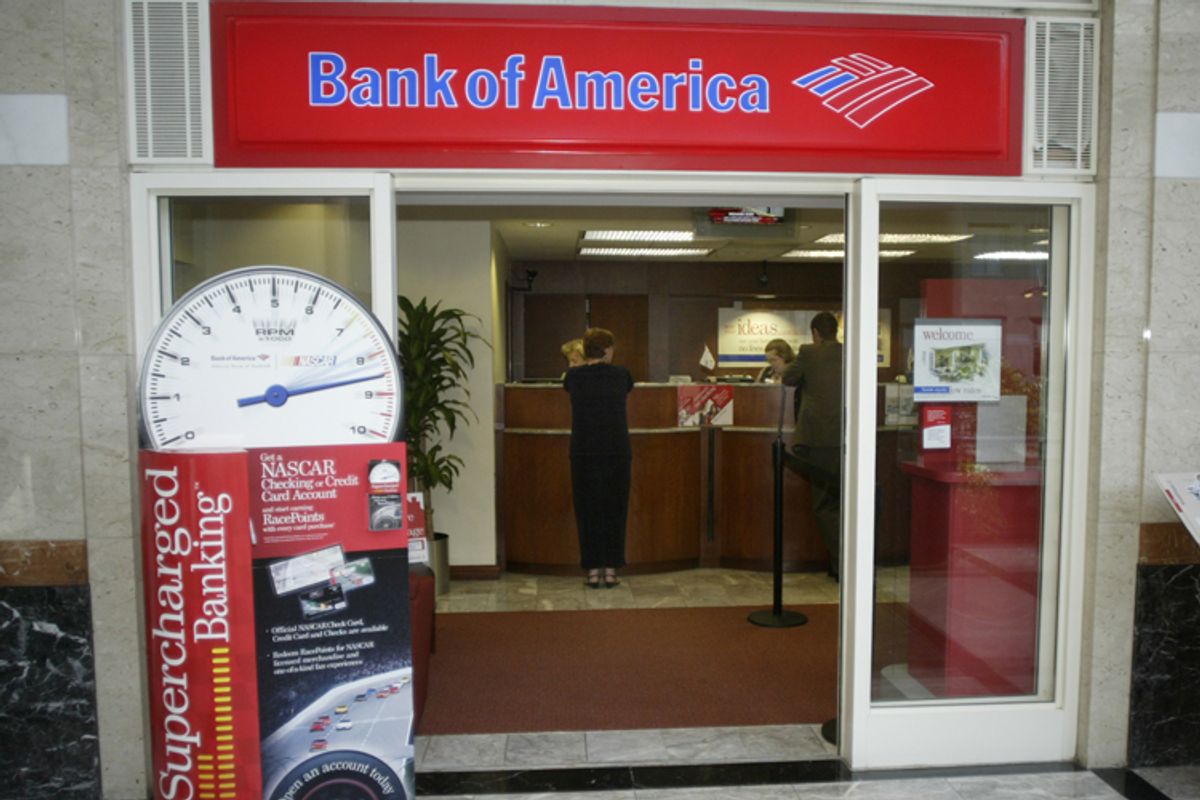 Keeping track of all the new developments in our brave new world of screwed-up foreclosures, misrepresented mortgage loans and toxic mortgage securities is a bewildering, Sisyphean task. Just this week, even as the Bank of America and GMAC both announced they were ending their self-imposed foreclosure moratoriums, the Obama administration's Federal Fraud Enforcement Task Force launched a criminal investigation into whether financial firms broke the law by filing fraudulent documents as part of the foreclosure process, the sheriff of Cook County, Illinois (which includes Chicago) announced he would not enforce foreclosure evictions unless they were proven to be handled "properly and legally," and a group of powerful bondholders announced its intentions has to sue the Bank of America in order to force it to repurchase bad mortgage loans.

For the moment, that last news item, while not strictly a part of the foreclosure scandal per se, has seized the attention of the econoblogosphere to the exclusion of almost everything else. On Tuesday, PIMCO, the nation's largest bond fund management company, the New York Federal Reserve Bank, and several other major Wall Street institutional investors sent a letter to the Bank of America requesting that it take back about $16.5 billion worth of bad mortgage loans packaged into 110 different mortgage-backed securities worth a total of $47 billion.

The details of the showdown are exceedingly complex, to the point of absurdity. Here's a taste, pointed out by Felix Salmon. One of the bondholders that signed the letter to the Bank of America is BlackRock, a prominent Wall Street money management firm. But...

BofA owns 34 percent of BlackRock, which is a lead plaintiff in this case. (BlackRock manages the mortgage bonds which the Federal Reserve inherited as part of the Bear Stearns bailout.) BlackRock, in turn, is suing Countrywide (owned by BofA), the loan servicer which has clearly not been doing its job:

Follow the bouncing ball. Countrywide, the nation's biggest mortgage lender, made horrible loans and bundled them into toxic securities which it sold on to banks who then resold them to other investors. When the bust happened, both Countrywide and Bear Stearns were brought down. Bank of America bought Countrywide, and the Fed assumed responsibility of the worst of Bear-Stearns' "toxic assets." The Fed then hired BlackRock, part owned by Bank of America, to manage the securities mess. And now it appears that responsible fulfillment of that duty requires suing Bank of America, which bears the legal responsibility for Countrywide's misdeeds. This is no ordinary legal squabble -- this bears directly on the original sins that precipitated the financial crisis!

Views differ on whether the effort to get BofA to repurchase Countrywide's bad loans is a big financial deal, in and of itself. Felix Salmon says yes, Naked Capitalism's Yves Smith says no, and you can find every shade of opinion in between if you spend any significant time looking.

But the larger question hanging over the whole drama is whether this showdown is just the tip of the iceberg. We know, without a shadow of a doubt, that there was bad behavior at every step of the mortgage loan process -- from the issuing of the original loan right on through, as we are seeing now, to the foreclosure process. But so far, outside of a handful of case, the forces of government have failed to bring the malefactors to justice. Quite the contrary -- the worst offenders have been kept on life support rather than be put to death.

The only force, in fact, that seems capable of bringing Wall Street to heel is Wall Street itself. And that's the true significance of the lawyer letter sent to Bank of America. The bondholders are getting organized. The securities lawyers are being mobilized.  Big money is demanding satisfaction from big money. If, in the process, some of Wall Street's biggest banks face so much financial pain that their very existence is placed in jeopardy, it's almost impossible to imagine that there will be political will for another bailout. Someone will take a hard fall. Many of us will no doubt cheer such a development, but we'd also do well to wonder what the ultimate consequences will be. As Wall Street starts to savage itself, who benefits?