Long before she left her headline-making voicemail message, she exhibited bizarre behavior regarding Anita Hill 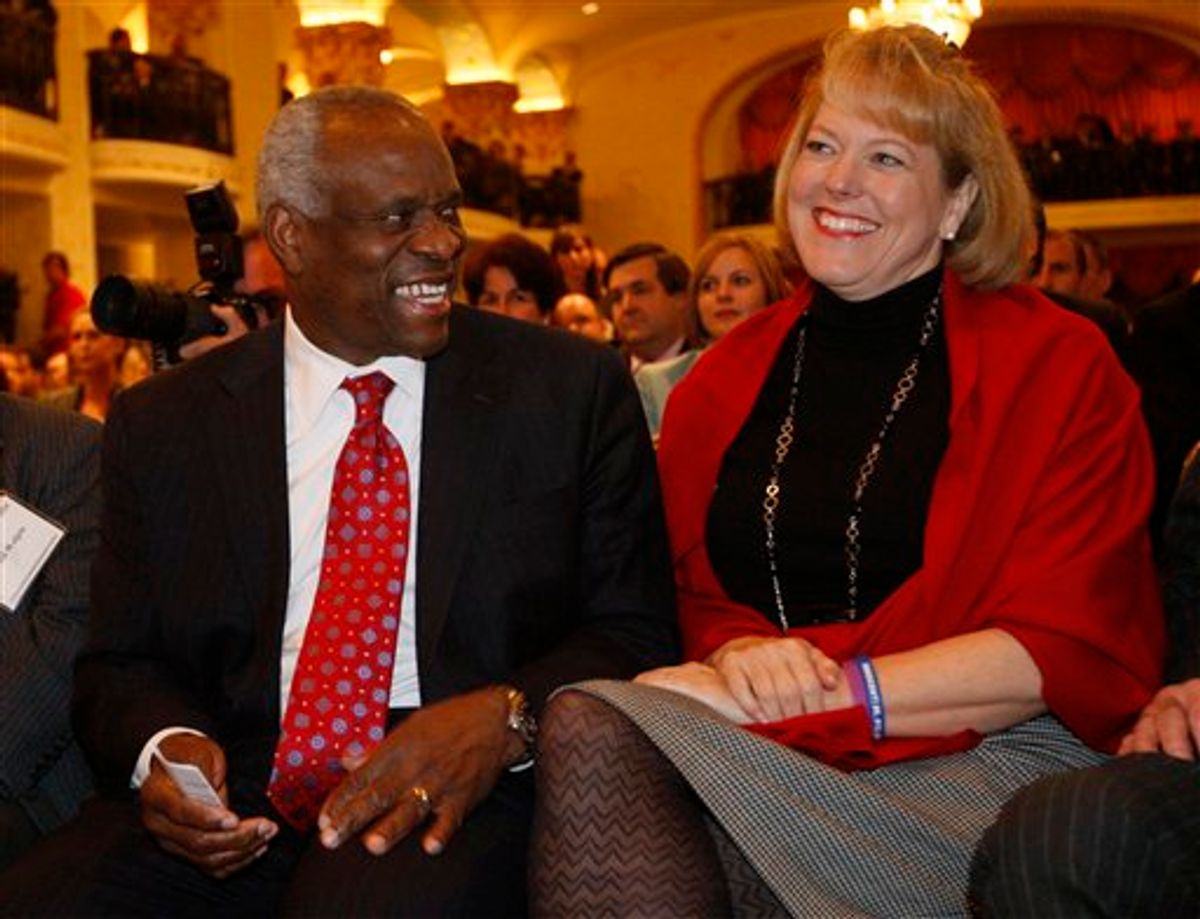 FILE - In this Nov. 15, 2007, photo, Supreme Court Justice Clarence Thomas, left, sits with his wife Virginia Thomas, as he is introduced at the Federalist Society in Washington, where he spoke about his new book and took questions from the audience. Virginia Thomas is asking Anita Hill to apologize for accusing the justice of sexually harassing her, 19 years after Thomas' confirmation hearing spawned a national debate about harassment in the workplace.(AP Photo/Charles Dharapak) (AP)
--

In trying to understand why Clarence Thomas' wife called Anita Hill after 19 years to request an apology, one thing stands out: Virginia's religious conviction in both her husband's innocence and her own martyrdom. In a 2007 "60 Minutes" profile, she admitted to feeling anger toward Hill and remarked, "You feel all the emotions when you're falsely accused" -- and all those emotions have erupted in the past. The Washington Post reports that she has previously "made unsolicited phone calls to voice support for people whose reputations have been shaken by what she sees as false accusations":

In 1999, she called Washington Post reporter Tom Jackman after he wrote a front-page article about a Virginia man falsely accused of being a sex pervert. Weeping, she told Jackman that the story reminded her of the ordeal she and her husband had endured. "My husband's name is Clarence Thomas," she said.

Back in the day, she described the Hill scandal as "spiritual warfare" and a battle of "good versus evil." Her fervent belief in her husband's innocence appears inextricably tied to her extreme religiosity. Shortly after her husband's confirmation, she explained how they coped: "We shut the kitchen blinds and turned on Christian praise music to survive the worst days." Her entire life and identity is built around her faith -- in a higher power, and in the honesty of her husband of 23 years.

Maybe she genuinely feels that it's time for Hill to tell what she believes with utter conviction to be the truth. Ex-Senate Judiciary Committee lawyer Lillian McEwen, who says she dated Clarence Thomas in the late 70s and early 80s, told the Post: "He is married to a woman who is loyal to him and religious in a way he would like to be. This combination of religiosity and loyalty and belief that he is really the kind of person who he describes in his book would just about compel her to do something like that." Or, maybe she made the call in hopes of bolstering a flagging faith in her husband.

Of course, this is all wild speculation, as is most often the case when trying to understand people's motivations -- but it's hard not to at least attempt understanding when someone's actions seem so blazingly crazy.