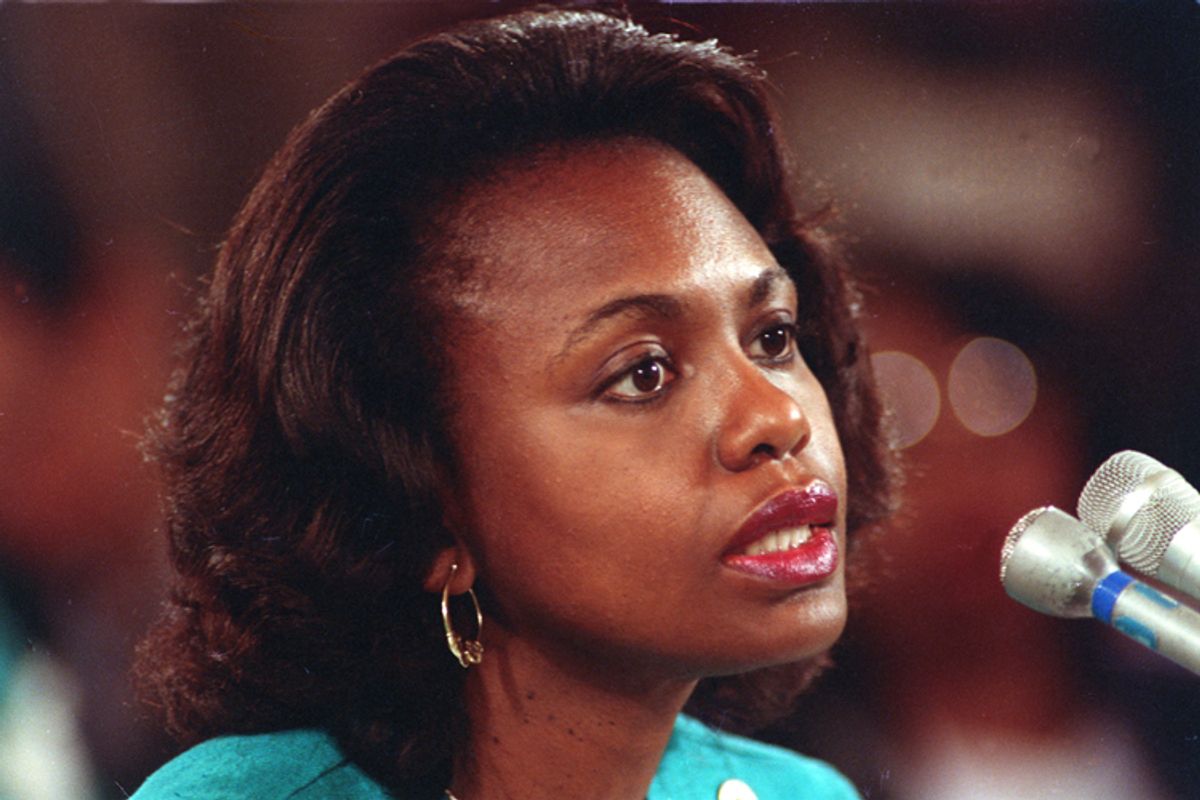 ** FILE**University of Oklahoma law professor Anita Hill testifies before the Senate Judiciary Committee on the nomination of Clarence Thomas to the Supreme Court on Capitol Hill in Washington, D.C., in this Oct. 11, 1991 file photo. Thrust briefly back in the spotlight by biting words in Thomas' new book, Hill now is trying to answer this question: Have things gotten better for women in the workplace? (AP Photo/John Duricka, file) (John Duricka)
--

[Updated]Nineteen years ago last Saturday, Dan Quayle, presiding over the Senate in his capacity as vice president, announced the results of the chamber's most contentious battle in years: "On the vote, the yeas are 52, the nays are 48, the nomination of Clarence Thomas of Georgia to be associate justice of the Supreme Court is confirmed."

In other words, 52 members of the world's most exclusive club either didn't believe the allegations of sexual harassment lodged against Thomas by Anita Hill (whose testimony, it should be remembered, only came to light through a leak to the press) -- or decided that, even if they were true, they weren't sufficient grounds to deny Thomas a slot on the high court. Thanks to a bizarre phone call from Ginny Thomas to Anita Hill, the Thomas confirmation hearings are back in the news, so it's worth noting that 24 senators who were in office in '91 are still there. And nine of them voted to confirm Thomas:

It's also worth noting that Joe Biden, who chaired Thomas' Judiciary Committee confirmation hearings (and whose staff was blamed by some for the leak of Hill's testimony), voted "no," as did Al Gore, who was then a Tennessee senator.  And Dan Coats, an Indiana Republican who left the Senate in 1998 but who is now on the verge of winning his seat back, voted "Yes." Only two Republican senators voted "no" -- Oregon's Bob Packwood (whose own career would be sunk by sexual harassment revelations several years later) and Vermont's Jim Jeffords, who left the GOP (and briefly flipped the chamber to Democrats) in 2001.

The immediate political fallout from the Thomas hearings is famous, with several female candidates -- some of them playing up the dismissive treatment Hill received from senators -- running and winning high-profile races in 1992, which was dubbed "The Year of the Woman." Democrats Patty Murray, Barbara Boxer, Dianne Feinstein and Carol Moseley Braun all won Senate seats in '92 (with Braun defeating Alan Dixon, a Democrat who voted to confirm Thomas, in a primary).

But women's groups failed to oust their top '92 target, Specter, who played the role of chief GOP attack dog against Hill during the Judiciary Committee hearings. Specter narrowly defeated Lynn Yeakel, a previously obscure candidate who rocketed to the Democratic nomination with an ad in which she asked, "Did this make you as angry as it made me?" after a clip of Specter roughing up Hill was shown. But Yeakel got the last laugh: When Specter tried to prolong his career by switching parties, she endorsed his Democratic primary foe, Joe Sestak, who knocked off Specter back in May.

Update: My assertion that Biden's staff was initially suspected by some of being the source of the Hill leaks was incorrect. Reports at the time noted that there was no reason to suspect that Biden or anyone on his staff had been involved.  Fingerpointing mainly focused on Howard Metzenbaum and his staff, though Metzenbaum vehemently denied playing any role -- as did Paul Simon and Ted Kennedy. A subsequent investigation failed to identify the source.