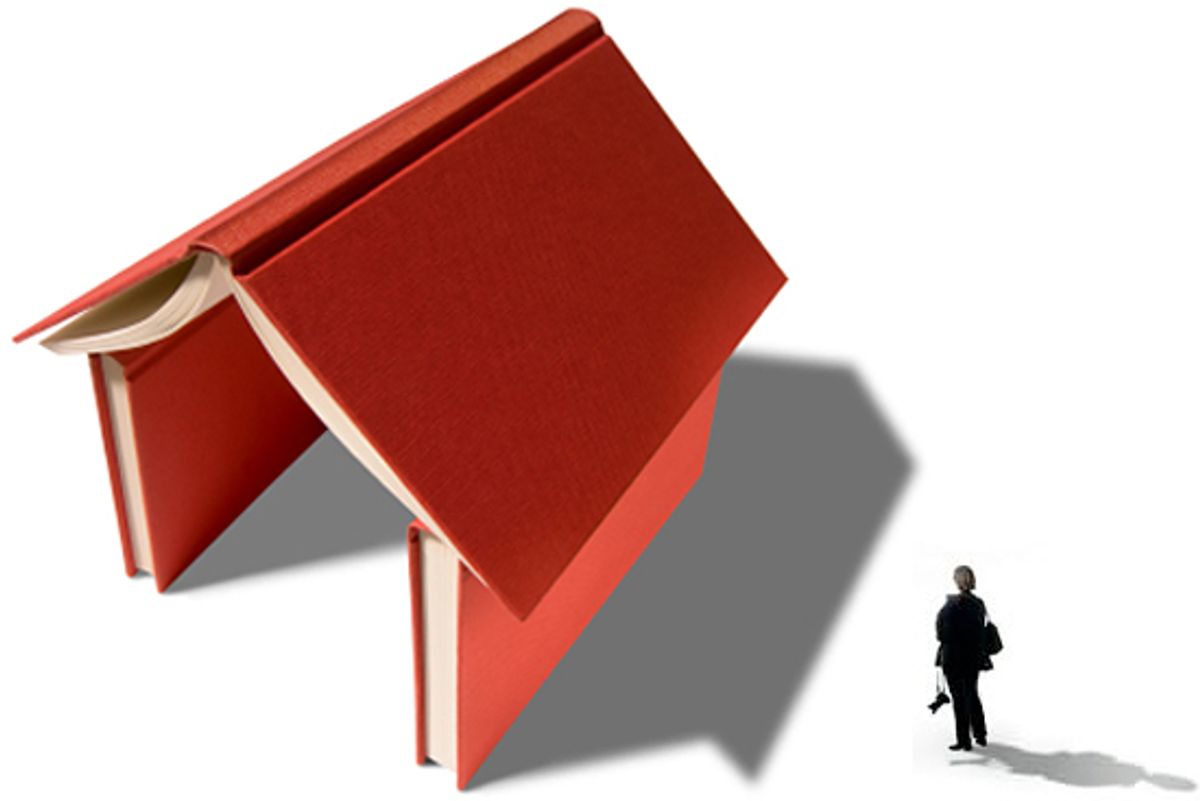 I like to take tours of writers' houses, a mild-mannered form of tourism I'd never much thought about until I read Anne Trubek's new book "A Skeptic's Guide to Writers' Houses." Trubek finds the whole notion of "literary pilgrimages" perverse, and rightly points out that preserving a house as a shrine is a particularly costly, even downright wasteful form of "worship." After all, "houses are not the product of writers. Books are." Wouldn't it be cheaper and more effective just to hand out free copies of the author's books?

"A Skeptic's Guide to Writers' Houses" is a restlessly witty book that often ends up chewing its own tail. Trubek, who limits her study to American sites, looks at a handful of houses-turned-museum in depth and provides a list of nearly 70 more in the U.S. Some of the writers so commemorated are still widely read (Edgar Allen Poe and Ernest Hemingway have three visitable houses apiece), others are nearly forgotten, like the late 19th century African-American poet Paul Laurence Dunbar. Trubek loves the Dunbar house in Dayton, Ohio, in large part because it's so personal, unspoiled and authentic; Dunbar's mother closed the door to her son's room on the day he died and let no one inside for the next 30 years.

What really bugs Trubek are stagey setups that attempt to simulate how the house looked when it was inhabited, usually by filling the rooms with items that have nothing to do with their long-lost resident, or that confuse fiction with history. Walt Whitman's house in Camden, N.J., has a pair of shoes by the bed that never belonged to the poet and pages from Benjamin Franklin's "Poor Richard's Almanac" scattered on the floor to simulate Whitman's untidiness. Even worse is Louisa May Alcott's house in Concord, Mass., where docents fight a losing battle against visitors' sentimental desire to reduce the place to the setting for "Little Women" -- and where, according to Trubek, Alcott's true identity as a "tortured romantic genius" has been erased.

Few writer's-house museums faithfully present the rooms as they were when the author inhabited them. Most have had to be restored, like Mark Twain's Victorian extravaganza in Hartford, Conn., which was used as a coal warehouse and converted into apartments before the Mark Twain Memorial Committee bought it in 1929. These museums might contain carefully reconstructed period furnishings or just approximate junk, like some of the objects in the Whitman house.

And while Trubek clearly prefers the more meticulous approach, she suspects that even the best of this lot were founded on misguided thinking. "I want to get as close as possible to the moment of creation," she writes of the "longing" that she believes motivates literary pilgrimages -- but she's never going to find that in some stranger's old shoes. People try to bribe the tour guides at Hemingway's house in Key West to let them type on his typewriter, as if the author's genius had somehow infused his tools. This is fetishism, pure and simple. Why obsess about these meaningless objects when the full force of any writer's genius is always available, right there, in his actual work?

I take Trubek's point, but reverence isn't the only reason to see where a writer lived and worked. Literary titans were still human beings, and often as not neither rich nor powerful. They had to live somewhere, and how and where they lived inevitably shaped what they wrote. Furthermore, almost any personality will, over time, reconfigure its surroundings in its own image. In researching a book about C.S. Lewis' children's novels, I went to the house in an Oxford suburb where he spent over 30 years of his life. Lewis' domestic situation was too complex, difficult and mysterious to get into here, but it wasn't until I actually saw the metal stairway he installed at the window to his upstairs bedroom (so he could come and go without walking through the rest of the house) that I fully understood how much his life was inflected with a desire for escape.

I, for one, don't visit writers' houses in a religious frame of mind, expecting to encounter objects that have been transfigured into relics by their contact with a divine presence. My motivation is entirely the opposite; I want to be inoculated against any tendency toward idol worship via a reminder that even genius is a product of flesh and blood. For me, it's the mundanity that gives most writers' houses their charm. I don't much care if all the objects are authentic, especially if the originals were pretty generic and undistinguished to begin with. In a way, the humbler, the better -- and nothing is humbler than the interchangeable.

The first such museum I ever visited was Dr. Johnson's house in London, where he wrote his famous dictionary. At that time, the room where he worked was nearly empty (it has since been furnished), but even so it was shockingly plain and small. Nevertheless, he got the whole English language into that room. Therein lay the thrill.

Among the charming illustrations for "A Skeptic's Guide to Writers' Houses" is a drawing of Emily Dickinson's chamber pot (not the actual one, I'm guessing) at the Homestead in Amherst, Mass. Trubek suspects that this reminder of rude reality has "smashed many a hoped-for reverie." But for some of us, that chamber pot is the star attraction. It tells us that Dickinson may have been incandescently brilliant and gifted, but she had to piss in a pot just like everybody else. The rooms where Melville wrote "Moby Dick" were cramped, and feel all the more so when you imagine how many family members he had to share them with. Sometimes you have to stand there and imagine it before you remember the really amazing thing: Masterpieces can happen anywhere.

An essay by Anne Trubek about her book, "A Skeptic's Guide to Writers' Houses," in the New York Times Book Review