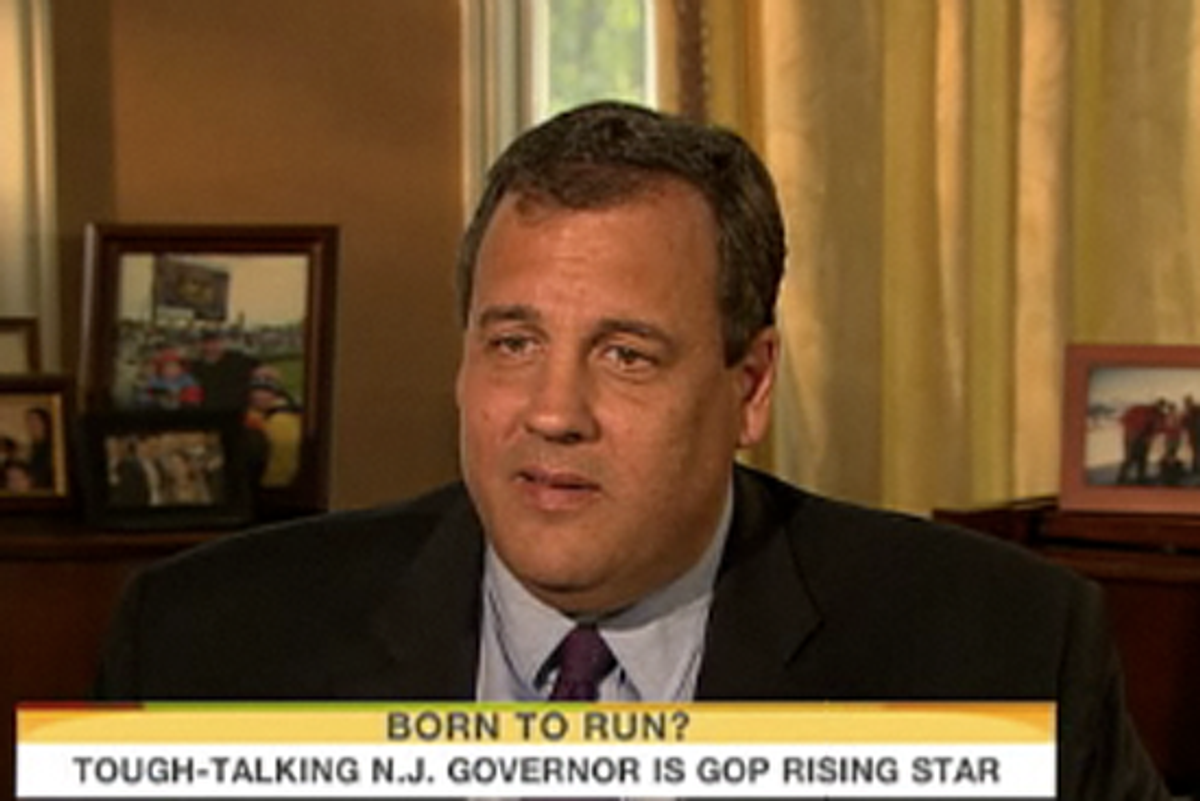 New Jersey Governor Chris Christie gets fawning press coverage because his blunt, no-nonsense style screams "authenticity" on TV (and because in a year where the press narrative is "Republicans resurgent," he is one of the very few prominent Republicans who is actually popular and not particularly embarrassing). But even by the standards of softball coverage of popular first-year pols, yesterday's Today Show profile of the governor is completely ridiculous:

His lovely wife sings his praises. His kids? Adorable. There are awed recitations of his many miracles since assuming office. Will he run for president? He's far too humble to get the nation's hopes up. And it's all set to the inspirational-but-blue collar sounds of Bruce Springsteen. (Not mentioned: Springsteen's refusal to play Christie's inaugural, shortly before the Boss came out in favor of same-sex marriage -- which Christie opposes.)

Christie is saving his embattled state by the means traditionally, enthusiastically endorsed by the "non-partisan" press: "Slashing spending" and "battling unions." (These positions, you may note, match the platform of your average Republican.)

Yes, whether he's shuttering Planned Parenthood clinics, ousting "liberal" judges in order to scare the rest of them, or abandoning necessary and useful infrastructure projects (a headline referencing his decision to kill the tunnel is briefly featured in the piece as an example of Christie's greatness), Chris Christie is a new kind of politician. And "his approval ratings," we're told, "keep going up." Wow! They keep going up? He must be at like 80% or something, right? Well, Christie's ratings did rise from March through October. Because in March he was at 43%, and he's currently at 51%. (Universally despised failed President Barack Obama, for what it's worth, is at 46%.)

But there is proof that Christie's message appeals to voters on both sides of the aisle. Specifically, that proof is... a Christie campaign ad.

The Republican Governors Association made a flashy 23-minute documentary about Christie that might actually be less flattering than the Today Show feature.

Despite the fact that it sounds like Today Show reporter Jamie Gangel has never spoken to a politician -- let alone asked one about his presidential ambitions -- before, she is actually an award-winning 25+-year veteran of NBC News. And this is not even her first friendly feature on an elected official this year!

Here she is in April going on a date with Scott Brown! Yes, that Scott Brown: The authenticity-oozing "moderate" Republican from the northeast whose election -- and no-nonsense style -- shocked the political establishment.

(And here's Gangel last year having a heart-to-heart with the deeply misunderstood Rush Limbaugh.)

Jamie Gangel is your source for hard-hitting stories on how newly elected Republicans are totally awesome dudes who you'd totally enjoy hanging out with.