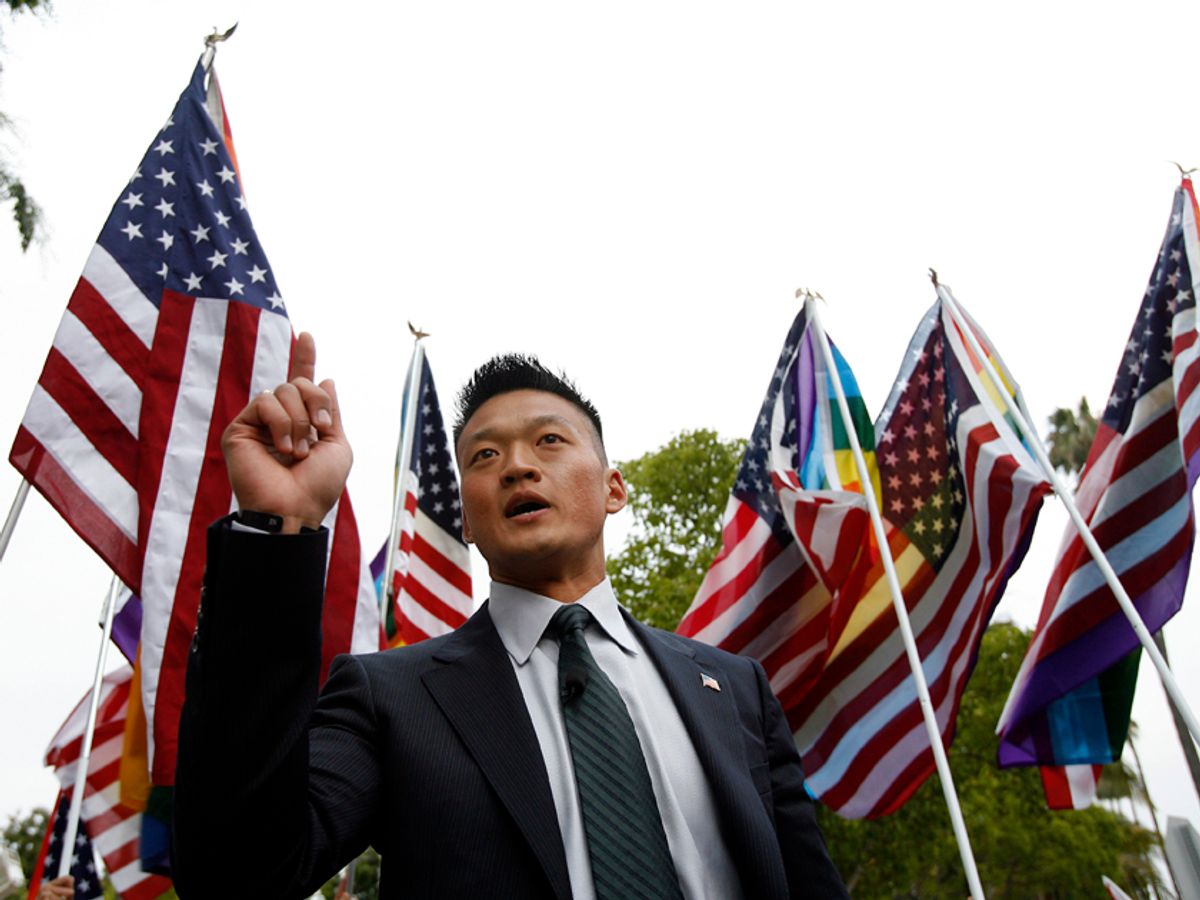 Lieutenant Dan Choi, who was recently dismissed from the U.S. Army for admitting he was gay, speaks during a rally outside the Beverly Hilton hotel, where U.S. President Barack Obama was attending a Democratic party fundraiser, in Beverly Hills, California May 27, 2009. California's supreme court backed a ban on gay marriage on Tuesday, upholding the voter-approved Proposition 8 defining marriage as between a man and a woman, but said the marriages last year of 18,000 same sex couples were still legal. REUTERS/Mario Anzuoni (UNITED STATES POLITICS CONFLICT) (Â© Mario Anzuoni / Reuters)
--

That was brief. The Ninth Circuit Court of Appeals granted the Obama administration's "emergency" request to stay Judge Virginia Phillips decision to immediately end the military's "don't ask, don't tell" policy. So the discriminatory policy is now back in effect, shortly after the Defense Department officially told recruiters to accept openly gay candidates.

In the New York Times, former Clinton-era Office of Legal Counsel head Walter Dellinger says Obama's Department of Justice is required to defend the law in court, even if it doesn't like it. But, he writes, the administration could still appeal while telling the court that they believe "don't ask, don't tell" to be unconstitutional. An administration's duty to defend and enforce laws passed by Congress is of course an essential part of our Constitution, to be ignored only when the White House really wants to imprison someone indefinitely without trial.

(Marc Ambinder, a good source of administration thinking -- or lack thereof -- on the policy, wrote last night: "The WH does not have a strategy for DADT beyond... wait for the DoD review to finish, hope Congress acts in lame duck." That's reassuring.)

NPR says the administration can't just end the policy end, because that would mean the DoD would have to rewrite a bunch of rules and other policies, and they only want to do that when Congress makes them, not the courts.

Discharge proceedings against soldiers suspected of being gay will now resume.

Here's a nice bit of color from the Times:

A man in his 50s who did not give his name but identified himself as the janitor in the recruiting office shook his head.

“This would have happened a long time ago,” he said, “but we’re dealing with politicians.”

I vote this guy for Obama's next Chief of Staff.