Time for Dems to slam the GOP hypocrites

Obama's GOP antagonists offer empty rhetoric even they don't believe. But does he have the heart to call them out? 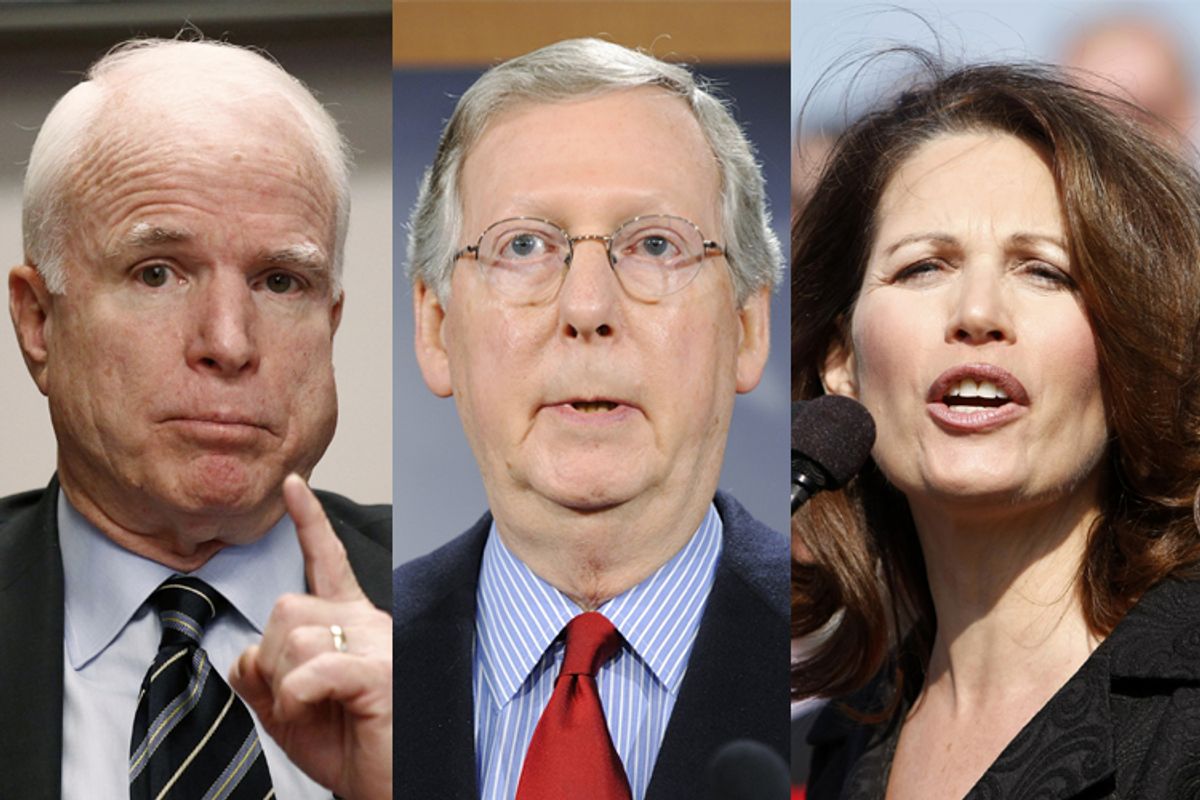 If the White House wanted to make a real fight of it, President Obama would spend the next two weeks reading aloud from the official correspondence of GOP congressional leaders. But has he got the necessary will?

Take Rep. Michelle Bachmann of Minnesota, for example. Campaigning for reelection, the photogenic Tea Party heroine postures boldly against taxes and government spending. A bitter critic of the Obama administration's efforts to improve the economy, she specifically and repeatedly derides "the failed Pelosi trillion-dollar stimulus."

Somewhat less publicly, Bachmann has taken a different position. Researchers for the nonpartisan Center for Public Integrity released a bunch of letters she wrote to various federal agencies seeking stimulus grants for her district. Perhaps the most telling is one she sent to the Transportation Department seeking money for a bridge over the St. Croix River.

Funding the project, Bachmann argued "would directly produce 1,407 new jobs per year while indirectly producing 1,563 a year -- a total of 2,970 jobs each year after the project's completion."

In Washington parlance, they're called "lettermarks" -- basically identical to the dreaded "earmarks" Republicans rail against, except more devious. Bachmann's far from the only Republican quietly seeking funding she voted against and publicly derides. Frauds and fakers every one.

The ink was barely dry on the American Recovery and Reinvestment Act before Senate minority leader Mitch McConnell told CNN in July 2009: "The stimulus was a big mistake. I think we can fairly safely declare it now a failure." Over the next two months, the Kentucky Republican nevertheless sought federal largesse for five projects, including a railroad he said had the potential to "attract industry, create jobs and move goods through areas underserved by national highways."

All voted against the stimulus, supposedly on grounds of principle, then sought funding for their constituents on the less abstract grounds that building bridges, tunnels, railroads and stringing broadband cable provide jobs, public and private, stimulating secondary economic activity in the bargain.

Politically speaking, this should be dynamite. Despite the attention it gets, the Tea Party's basically a joke, hearkening back to a mythical Golden Age in American life that never existed. Prior to New Deal and Great Society spending, for example, large parts of McConnell's Kentucky -- like much of the rural South -- enjoyed Third World living standards. Nobody really wants to go backward. But voters are scared and confused.

Alas, somebody's got to light the fuse. Which is where President Obama comes in, or would if he had the heart for it, by no means clear. See, it's not merely the garden-variety hypocrisy he should be mocking -- juxtaposing the demagogic rhetoric of his GOP antagonists with the home truths in their "lettermarks." It's the crass political opportunism.

For reasons of sheer partisan advantage, he should say, the Republicans bet unanimously against the U.S. economy, wagering that short of a miraculous recovery from the 2008 financial meltdown, the White House would be blamed. Put the GOP back in power, that's all you'll get. It's all they've got: empty rhetoric even they don't believe.

As Obama himself (channeling Bill Clinton) repeatedly told New York Times reporter Peter Baker during a recent interview, "They're not serious." Indeed, they're not. The GOP War on Arithmetic that began under Ronald Reagan and reached its apotheosis under George W. Bush proceeds apace.

Then why do we also find Obama telling the Times he thinks he can make nice with the GOP after November? "It may be that regardless of what happens after this election, they feel more responsible," he said, "either because they didn't do as well as they anticipated, and so the strategy of just saying no to everything and sitting on the sidelines and throwing bombs didn't work for them, or they did reasonably well, in which case the American people are going to be looking to them to offer serious proposals and work with me in a serious way."

Dream on, Mr. President. Obama sounds like a battered wife. Elsewhere, Obama speculates that including tax cuts in the stimulus was a mistake. Perhaps had he "let the Republicans insist on the tax cuts" it would have given the appearance as well as the reality of bipartisanship.

Alas, that's too subtle by half. A recent New York Times/CBS News Poll showed that fewer than 10 percent of Americans even know the stimulus lowered their income taxes -- much less who proposed it.

Dramatic readings are the answer. The president needs to call these jokers out.