A transparent trick, not a dirty one 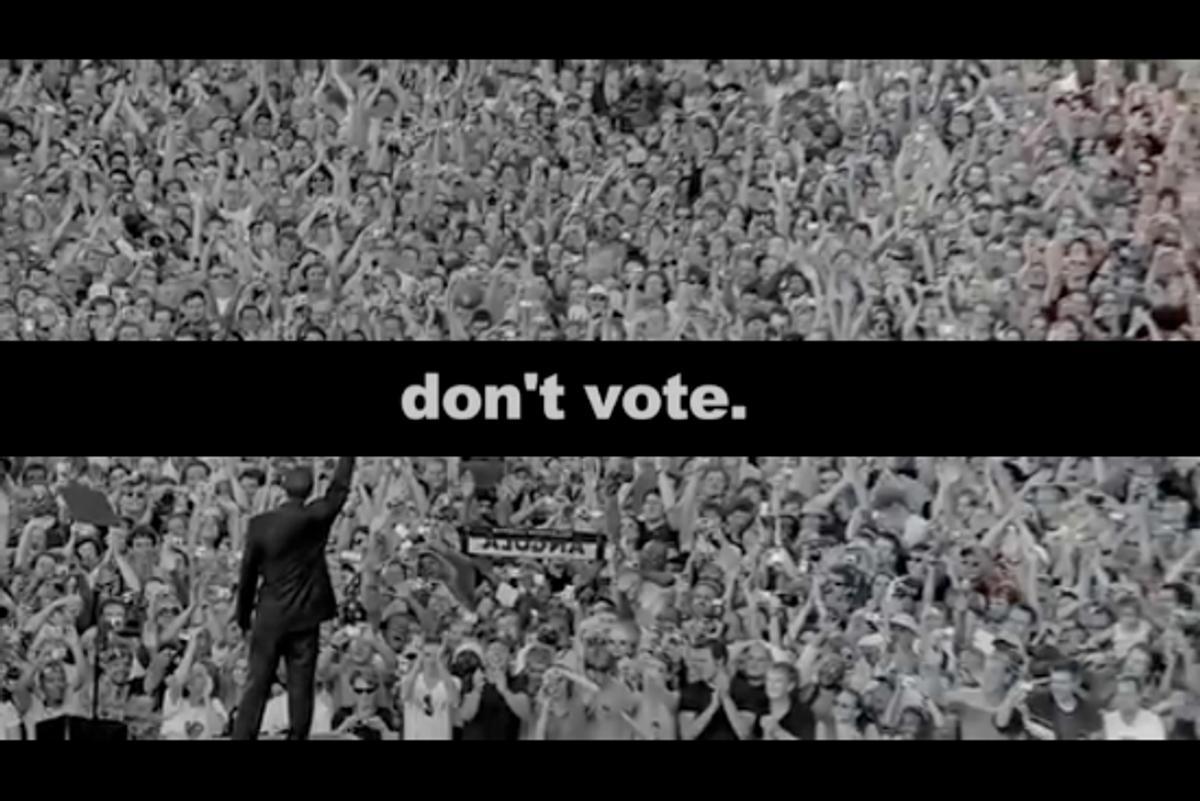 The now-yanked “Don’t Vote” ad in Nevada has created quite the firestorm. The spot, from “Latinos for Reform” -- although it’s not clear where their reformist energy resides -- urged Latino voters to stay home in its initial incarnation.

Democrats, including President Obama, reacted with a swell of outrage, complaining bitterly that the spot attempted to suppress the Latino vote -- which Harry Reid desperately needs. (The full English version of the ad is below.)

Univision refused to run it because it violated their principles about the importance of voting as a civic obligation.

This morning, NPR ran a feature which noted that the “Latino conservative activist” who created the ad claims he was not trying to chill the vote, and blames the contretemps on “clumsy editing.” According to NPR, Robert de Posoda is maintaining that “Before the edit the tag line was ‘Don’t vote for those who betrayed you.’ After the edit the line was cut to ‘Don’t vote.’”

The spot uses imagery of President Obama, Nancy Pelosi, Harry Reid of course, and other Big Democratic Brands to make the point that despite all the promises -- ostensibly about immigration -- Latinos have been betrayed.

The “clumsy editing” defense is laughable. Given the number of people involved in reviewing the final cut of a commercial, there’s no way the first version was anything other than intentional. This was the big hook of the spot, after all.

It’s also hard to imagine that Posoda and his reformist cronies -- many of whom have Republican ties -- didn’t imagine that telling people to avoid exercising the right which hundreds of thousands of Americans have died for, and are dying for right now, wouldn’t provoke a modicum of outrage. Particularly in this overheated political climate.

Is it possible that cynicism has reached such epidemic -- and in parallel, such self-deluding proportions, that the sheer anti-democratic weight of “Don’t Vote” didn’t penetrate their brains?

Ironically, though, the fuller version, the one that urges Latinos to not vote for those who betrayed them, is a stronger message. It’s more likely to get voters to stay home out of frustration than the far more petulant “don’t vote at all” admonition because “betray” is deeply emotional language that elicits a visceral response.

Either way, though, the whole artificially constructed message, and the group behind it, is so transparent as to not warrant being called a “dirty trick” at all. Latino voters are too savvy and too connected to think that the Republicans -- with the relentless use of the immigration card -- are anything close to a default option.

Of course, behind this is Reid’s weak hold on Latinos. If there was any level of emotional power to his connection, the spot would never have been produced. No activist group would ever have told blacks not to vote for Bill Clinton.

There was talk during the Bush years that as Latinos became more affluent, they would move more Republican given their conservatism on social causes. But that would have required a long-term Republican vision, including moderation on immigration reform along the lines of what John McCain advocated before he bolted right. If it worked though -- and it could have -- the dynamics of Republican inroads into the fastest-growing demographic group would have changed the whole 50-state game.

Opportunism triumphed, though. The Arizona law, along with an economic climate that’s amplified immigrant anxiety -- plus the dizzying chance to take the House and Senate -- have given Republicans an immediate opportunity that’s too tempting to resist.

As a result, they’ve lost a generation of Latino voters who, for elections to come, will not being staying home.