The former presidential candidate is outraged that NPR sacked Juan Williams. But he told Helen Thomas to "go home" 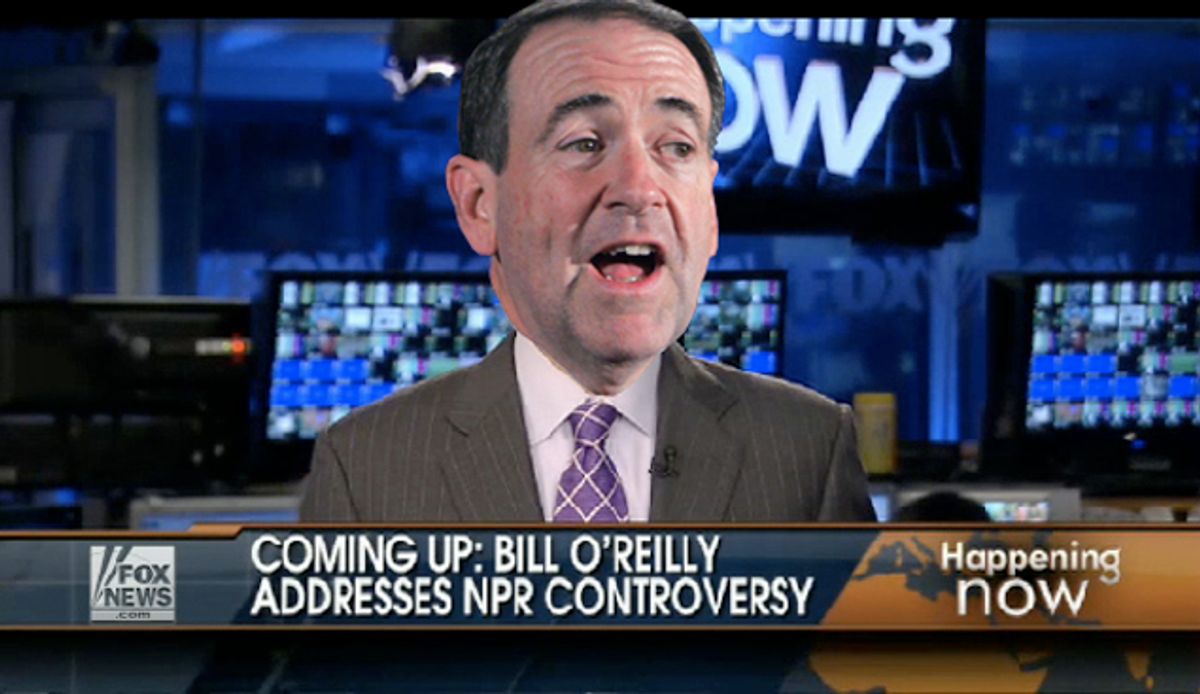 In response to NPR firing Juan Williams for expressing prejudice toward Muslims, Mike Huckabee today slammed NPR for discrediting "itself as a forum for free speech" and solidifying "itself itself as the purveyor of politically correct pabulum."

In a statement published on his PAC's website, Huckabee called for the de-funding of NPR and said he will "no longer accept interview requests" from the network:

NPR has discredited itself as a forum for free speech and a protection of the First Amendment rights of all and has solidified itself as the purveyor of politically correct pabulum and protector of views that lean left.

While I have often enjoyed appearing on NPR programs and have been treated fairly and objectively, I will no longer accept interview requests from NPR as long as they are going to practice a form of censorship, and since NPR is funded with public funds, it IS a form of censorship. It is time for the taxpayers to start making cuts to federal spending, and I encourage the new Congress to start with NPR.

Huckabee, who hosts his own show on Fox, has himself been criticized for extreme rhetoric. He has reportedly advocated the idea of a population transfer of Palestinians out of the West Bank.

But more to the point, Huckabee's rhetoric about free speech rings hypocritcal in light of his reaction to White House reporter Helen Thomas' comments about Jews and Israel in June. After those comments, in which she said Jews should "get the hell out of Palestine," a huge media outcry -- with Huckabee one of the loudest voices -- prompted Thomas to resign.

On his Fox show, Huckabee fumed that Thomas's words were "outrageous, anti-Semitic, racist," and "indefensible." His conclusion: "Helen, I’ve got a suggestion: maybe it’s time for you to go home."