Secret memo displays corporate and media tentacles of the Kochtopus 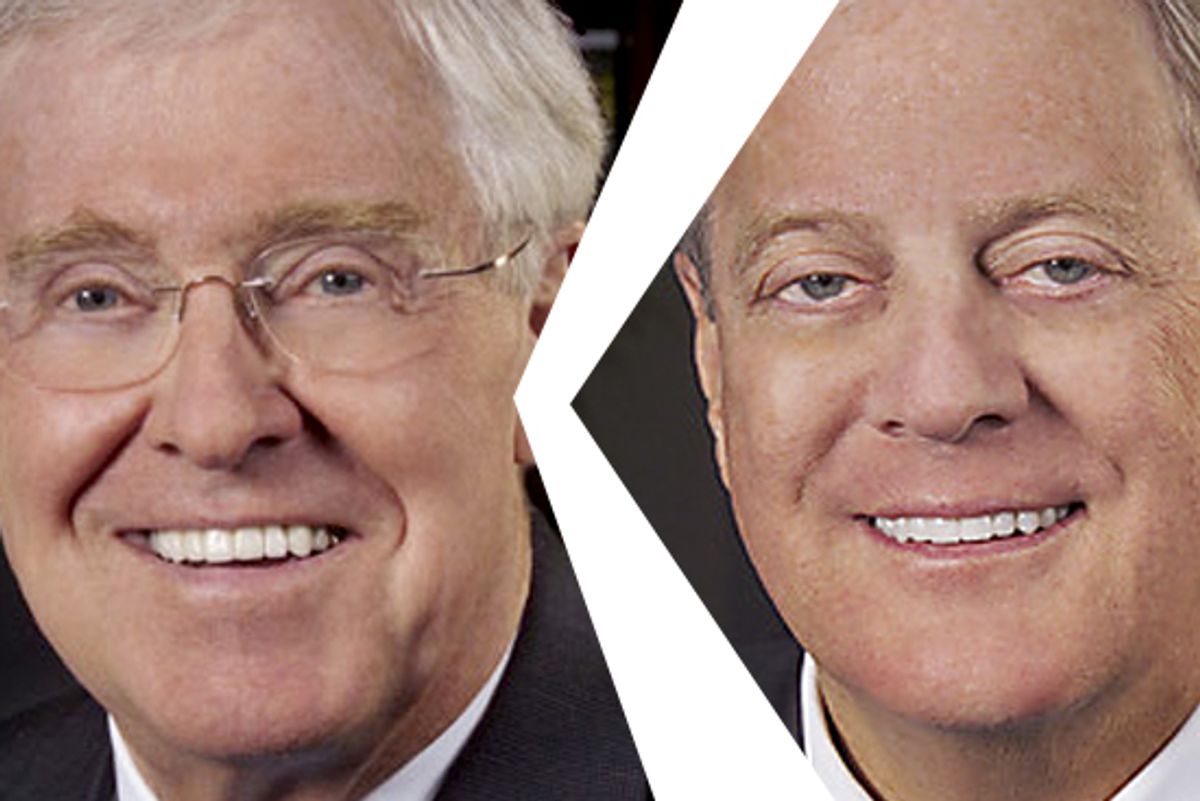 Is there a vast corporate conspiracy behind the Tea Party and the midterm resurgence of the far right? The most suggestive evidence involves the well-documented role of the billionaire Koch brothers, their Americans for Prosperity front group and other Koch-funded entities – but now a secret letter from Charles Koch shows that the tentacles of the “Kochtopus” include a high-level “network” of corporate, lobbying, nonprofit, and media organizations that meet regularly to plot right-wing strategy. The letter and accompanying documents first appeared on Think Progress in a post by Lee Fang that is well worth reading in full.

Dated September 24, 2010 and signed by Koch himself on company stationery, the letter urges recipients to join “our network of business and philanthropic leaders, who are dedicated to defending our free society” – and specifically to attend the group’s next meeting at a Palm Springs resort in late January. Most revealing is an attached brochure about the network’s most recent meeting, which occurred in Aspen last June 27-28.

According to that document, the Palm Springs meeting attracted such corporate and financial titans as Stephen Schwartzman of the Blackstone Group, Philip Anschutz of Anschutz Industries, and Steve Bechtel of Bechtel Corp., as well as representatives of Bank of America, Allied Capital, Citadel Investment, among many others – all of whom gathered to learn how to “elect leaders who are more strongly committed to liberty and prosperity” with a “strategic plan to educate voters on the importance of economic freedom.”

Explaining the network’s plan for November and beyond were David Chavern, second in command at the US Chamber of Commerce; Tim Phillips, the president of Americans for Prosperity; Veronique de Rugy of the Mercatus Center at George Mason University; and Gretchen Hamel, the former Bush administration official who runs Public Notice, a group launched last spring under mysterious auspices to attack government spending.

But conservative journalists were the true stars of that June meeting, notably Washington Post columnist and Fox News pundit Charles Krauthammer (who spoke at a mountaintop dinner on “What’s Ahead for America?”), the National Review’s Ramesh Ponnuru, syndicated columnist and author Michael Barone, and Stephen Moore of the Wall Street Journal editorial board. Glenn Beck of Fox News – who has lately been defending the Chamber of Commerce as advocates of “the little guy” – is also listed as a “presenter.”

Nobody was supposed to talk about the meeting, as the brochure's “Confidentiality and Security” section emphasizes, so nobody was meant to know that Krauthammer, Ponnuru, Barone, Moore and Beck were flown out to Aspen, lodged in luxury accommodations, and presumably paid a handsome honorarium by Koch to entertain and enlighten the would-be saviors of the Republic. But now we know. So where are the guardians of media integrity, who made so much noise about the innocuous jawing of the liberals on Journolist?

Still more troubling is the same brochure’s boast that Clarence Thomas and Antonin Scalia have addressed past meetings of the Koch network. Why would two Supreme Court justices show up at a secret conclave of far-right activists and corporate lobbyists, impairing the transparency and impartiality of the nation's highest court? This is a much more important story than that harebrained harassing phone call by Virginia Thomas to Anita Hill.