A new book argues that Charles Lindbergh was not an anti-Semite, but rather a victim of smears by FDR and the left 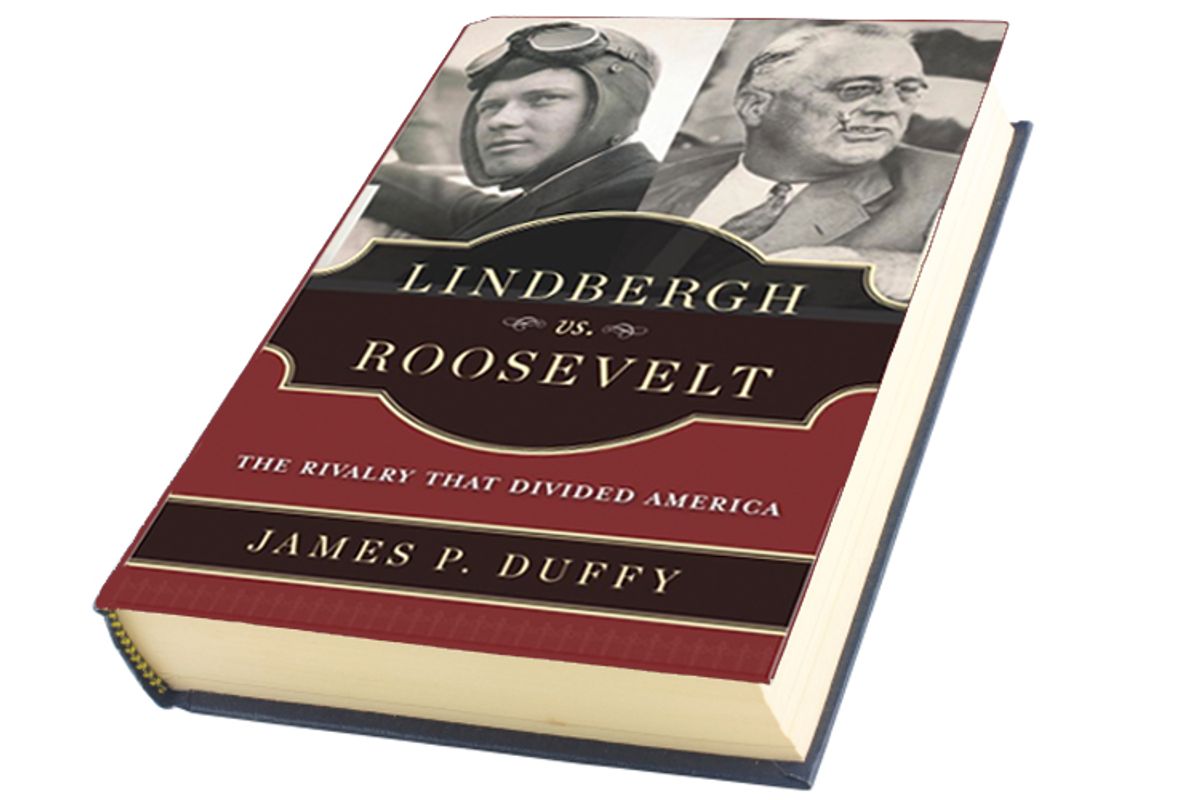 The influential conservative publishing house Regnery has just released a book that argues, contrary to popular belief, that aviator and political leader Charles Lindbergh was neither anti-semitic nor pro-German, but rather was the victim of an unfounded smear campaign by President Franklin D. Roosevelt.

According to promotional material, the book, "Lindbergh vs. Roosevelt: The Rivalry That Divided America" by James Duffy, argues that Lindbergh was the target of a "vicious personal vendetta by President Roosevelt" that "blighted his reputation forever." FDR's campaign, the book argues, also amounted to a "modern-day playbook for the Left and their attack on those who speak out against them."

We can't fully judge the book until we've read it. But the book jacket explicitly says:

This groundbreaking book reveals: ... Why the popular belief that Lindbergh was an anti–Semite is absolutely wrong

Lindbergh's leading role in the America First Committee, which argued strongly against U.S. involvement in what would become World War II, is well known. But what about the anti-Semitism question?

We're not experts on Lindbergh, and obviously he was a major and complex historical figure. However, when we asked City University of New York History Professor David Gordon, who is an expert and has written on the topic, he told us that there's good reason Lindbergh is considered an anti-Semite.

Gordon points first to a famous speech Lindbergh made in Des Moines in September 1941, in which Lindbergh named three parties -- the British, the Roosevelt Administration, and the Jews -- who were pushing for war. He said of the latter group:

Instead of agitating for war, Jews in this country should be opposing it in every way, for they will be the first to feel its consequences. Their greatest danger to this country lies in their large ownership and influence in our motion pictures, our press, our radio and our government.

The speech sparked outrage at the time and became a major self-inflicted blow to Lindbergh's reputation. Still, modern-day Lindbergh defenders like Pat Buchanan have argued that what he was saying in that speech was essentially true.

That defense could not possibly apply to writings in Lindbergh's journal. To wit, an entry from 1939 in which he discusses Jews on board a ship from Europe to America getting sea-sick, and then:

Imagine the United States taking these Jews in addition to those we already have. There are too many in places like New York already. A few Jews add strength and character to a country, but too many create chaos. And we are getting too many.

Regnery has for decades been the unofficial publishing arm of the right-wing of the Republican Party. It recently published, for example, Dinesh D'Souza's book that paints President Obama as a Kenyan anti-colonialist.

In what is probably not the best strategy to attract Jewish voters to the conservative movement, Regnery is promoting "Lindbergh vs. Roosevelt" by playing up supposed parallels to the present, with Obama in the role of villain (Roosevelt), and the conservative opposition in the role of hero (Lindbergh). From a Q&A with author James Duffy:

Regnery: Lindbergh vs. Roosevelt is a history book. Do you think it holds any relevance to current events?

Duffy: Absolutely! The demonization of Lindbergh by FDR and his supporters is being replayed today against people who oppose the policies of Barack Obama. By describing what happened to Lindbergh's reputation, I wanted to issue a warning to all right-thinking and fair-minded people because it is very important that such character abuse and censorship not happen again.