40 Alaska Republicans, including some tied to Lisa Murkowski, ask the Senate candidate to talk about his past 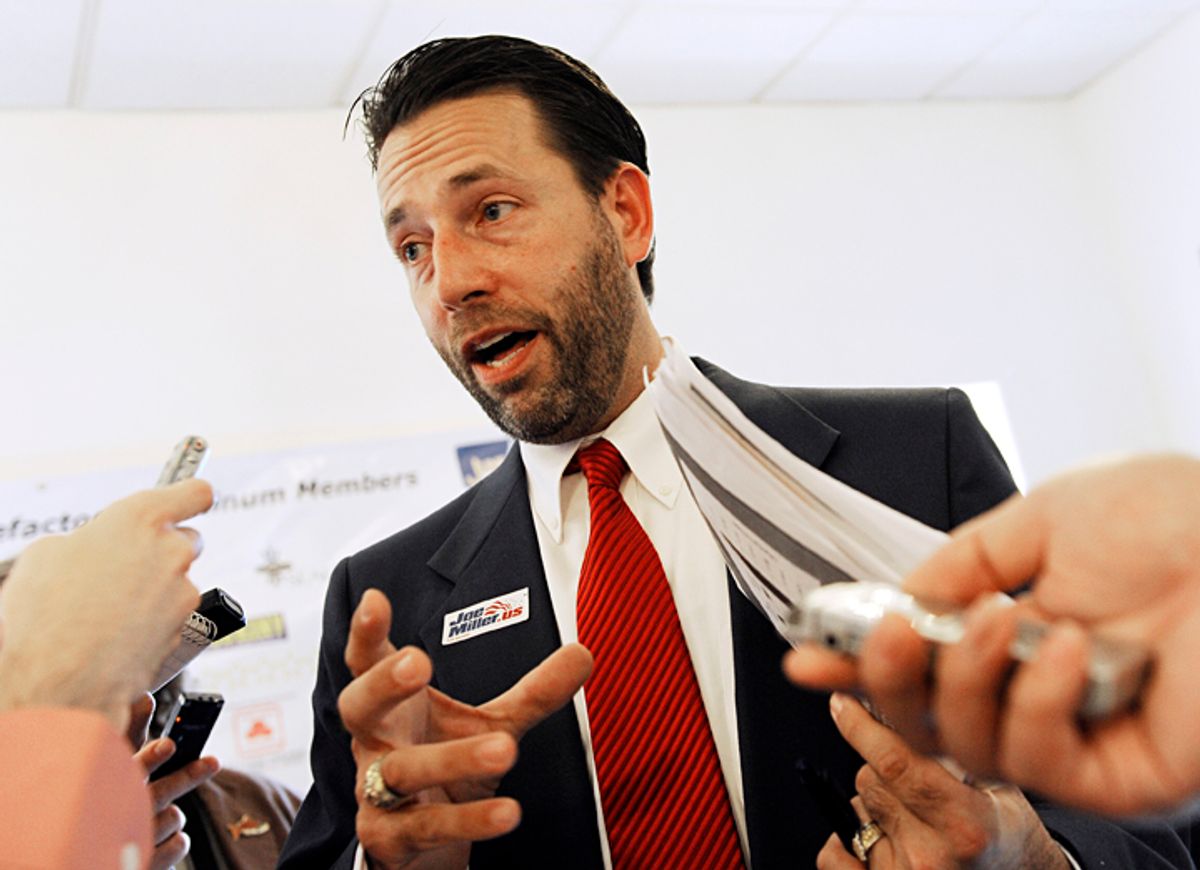 FILE- In this Sept. 16, 2010 photo, Republican candidate for Alaska's U.S. Senate seat, Joe Miller, answers questions from the media following a debate between Miller and his Democrat opponent Scott McAdams, at the Juneau Chamber of Commerce luncheon, in Juneau, Alaska. Since his stunning defeat of Sen. Lisa Murkowski in the Republican primary, tea party favorite Joe Miller has suffered a series of potentially crippling missteps that have helped turn the Alaska Senate campaign into a highly competitive race. (AP Photo/Chris Miller) (Chris Miller)
--

Alaska Republican Senate candidate and Tea Partier Joe Miller has been stonewalling the press ever since he beat incumbent Republican Sen. Lisa Murkowski in the primary back in August. There has been a steady stream of revelations about Miller's career and personal finances since then, but there is still a lot that is not known.

So it's significant that a group of 40 Alaska Republicans wrote an open letter to Miller this week demanding that he start showing a basic level of cooperation with the state press corps. The Miller camp is not answering the substance of the letter, but dismissing it as coming from a group of Murkowksi supporters. From the letter:

In the Alaska Republican Party's officially adopted "Statement of Principles," Alaska Republicans affirm our commitment to "strongly support ... high ethical standards. transparency and accountability in government for ... elected and appointed officials." It follows that our Republican candidates for public office should commit themselves individually to this standard.

As current and former members of the Alaska Republican Party State Central Committee and other concerned Republicans, we ask Republican U.S. Senate Joe Miller to honestly and directly answer all questions asked him by the public and the press, and to allow the release of relevant documents that will show Alaska voters that he is both qualified and morally fit to represent our state in the United States Senate.

No electable candidate can seriously pursue public office without implicitly saying to voters, "I promise to be ethical, honest and accountable and to make my candidacy as open and transparent as possible." It is unacceptable -- and certainly not a winning strategy -- to explicitly refuse to answer reasonable questions about oneself, and to disrespect the Alaska public and the press' right to do so before the questions have even been asked.