Will Walmart's locavore promises mean much?

The king of grocers is committed to sell $1B of local food from small farms, but not everyone is impressed 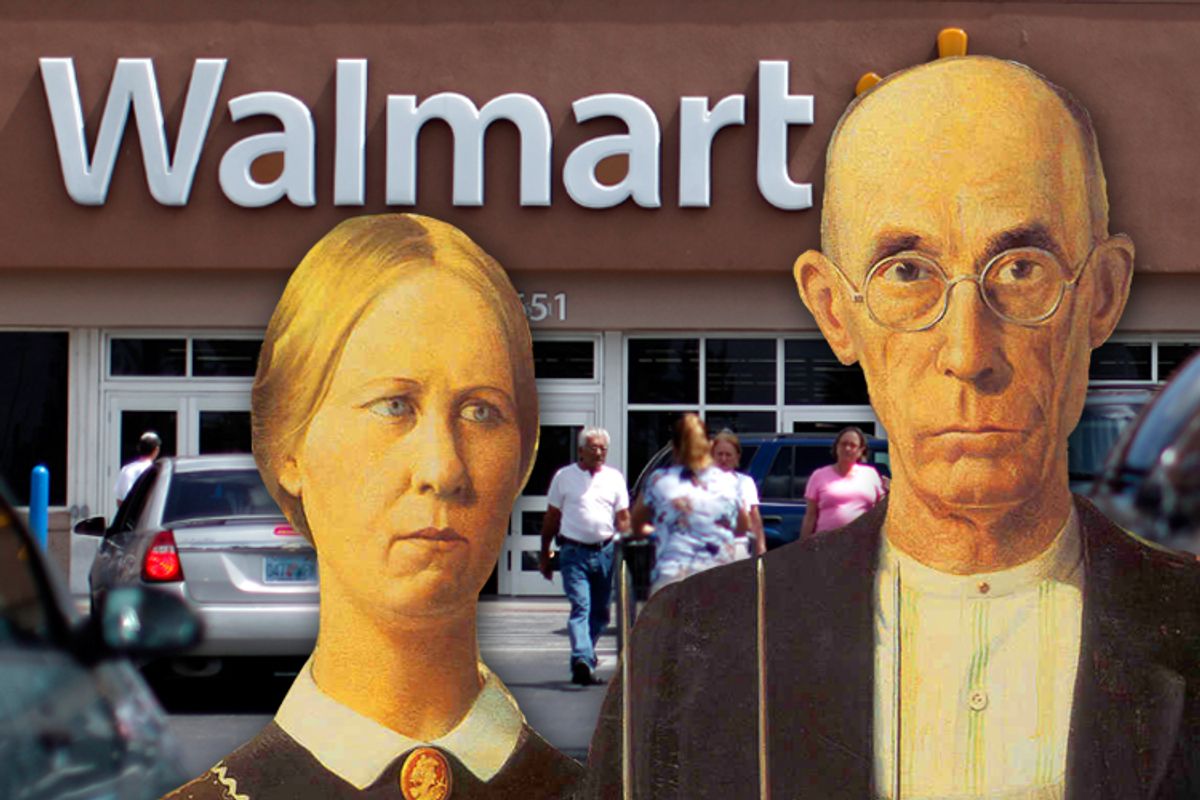 Last week, Walmart trumpeted a major new commitment to sustainable agriculture and supporting local small farms. Coupled with the enormous numbers -- training for 1 million farmers! Investing $1 billion to make its produce supply chain more efficient! -- there were nuggets of common-sense wisdom, the kind that is music to sustainability advocates' ears: In an interview with Food Safety News, Ron McCormick, senior director for Strategic Food Sourcing, said, "It made sense to us, that if we could revitalize [the] economies [of declining rural areas], it would let us buy fresher product for our customers and save food miles. At the same time, we would be supporting many rural communities that support our stores."

Reading further, we got to an impressive commitment to sell a billion dollars worth of food bought from small farmers. And, as if to keep the big numbers rolling, the release also boasted that that produce will come from a million farms. Great! But wait ... a billion dollars, a million farms: That comes out to $1,000 per farm. And so we started to wonder if there was really much good to be had from this policy.

Salon spoke to Linda Berlin, Director of the Center for Sustainable Agriculture at the University of Vermont, to get some perspective on Walmart's efforts.

What do you make of Walmart's initiative to become more sustainable? Is this an instance of "greenwashing" or is Walmart taking a step in the right direction?

I can't speak to their motives per se, although I can make a guess about them. They see the way the market is going. A large percentage of the American population at this time say that they at least occasionally buy produce in their local communities. Local food is sort of the new wave of people's interests, so I think that they're trying to capture market share probably. That seems like the most logical reason.

But it seems like there could be some positive outcomes, in particular outcomes that relate to environmental issues. The challenge for me is that initiatives that are supporting positive environmental causes simultaneously need to be supporting strong economy and doing things in a socially just and fair way. I don't want to just look exclusively at the potential environmental benefits.

Right. And Walmart plans to sell $1 billion in food from 1 million small-to-medium farmers. At an average of $1,000 per farmer, what will be the impact?

Well, that's a good question. Walmart defines small and medium farmer by some amount of acreage. And the technical definition from the USDA has to do with the amount of product sold -- it's not the amount of acreage because depending on what you sell, you can make a whole lot of money on a small acreage, or not. And my memory of the USDA's definition of small farmer is someone who grosses under 10 or 15 thousand dollars in a year.

You have to pay your own inputs out of that, so the amount that's really your profit is pretty minimal. It's a drop in a bucket. These days a lot of chains are requiring farmers to meet certain food safety requirements, and that often requires investing money in their systems. So if Walmart requires that -- and I guess they would -- then you would have to make an investment just to be able to sell to them. So it just depends on what kind of farmer you are whether it would be worth it to do it or not.

Do you suspect that these farmers who make business ties with Walmart will be able to sell through other markets? Will they be tied to Walmart exclusively?

$1,000 does not a living make, so we're not talking about exclusive contracts. The numbers are a little peculiar in terms of being able to add up to much. If it's their goal to keep prices low, to make some measure of profit off of this process, then it seems to me that it would be difficult for them to pay the farmers very highly. But I don't know that for a fact. I do know, just because it's Walmart, it doesn't necessarily mean money going in to the local economy. That seems a little more of a given.

But in doing this, will Walmart co-opt and thereby change the meaning of "local" and "sustainable?"

Maybe they'll somehow be trendsetting. For example, Walmart has done some good with bovine growth hormone, when they made a decision to disallow milk purchases that came from farms that were using BGH. That was really taking a lead role, and that meant that a lot of Vermont farmers stopped using it because that was a significant market for those farms. So their decision did reverberate through the farm community, and it did change the shape and nature of production methods.

And maybe it will give access to local food to people who rely on Walmart as a primary source for their food, if they price local products comparable to other products. People often shop at a place that they identify with, and there are people who identify with Walmart store and they're comfortable with that environment. I don't know if their goal is to try to bring in people who have not otherwise been to Walmart, and if that will it be successful.

Some of the reasons that people buy local, they can't get at Walmart. People enjoy going to farmers' markets. It's sort of a feel good experience -- they like getting to know their farmer and being able to talk to their farmer, and they won't likely be getting at that at Walmart. But will it be successful? It's hard to know.

Michelle Loayza is an editorial fellow at Salon.