A member of Delta Kappa Epsilon, which led pledges in a chant about rape, opens up to Salon about the scandal 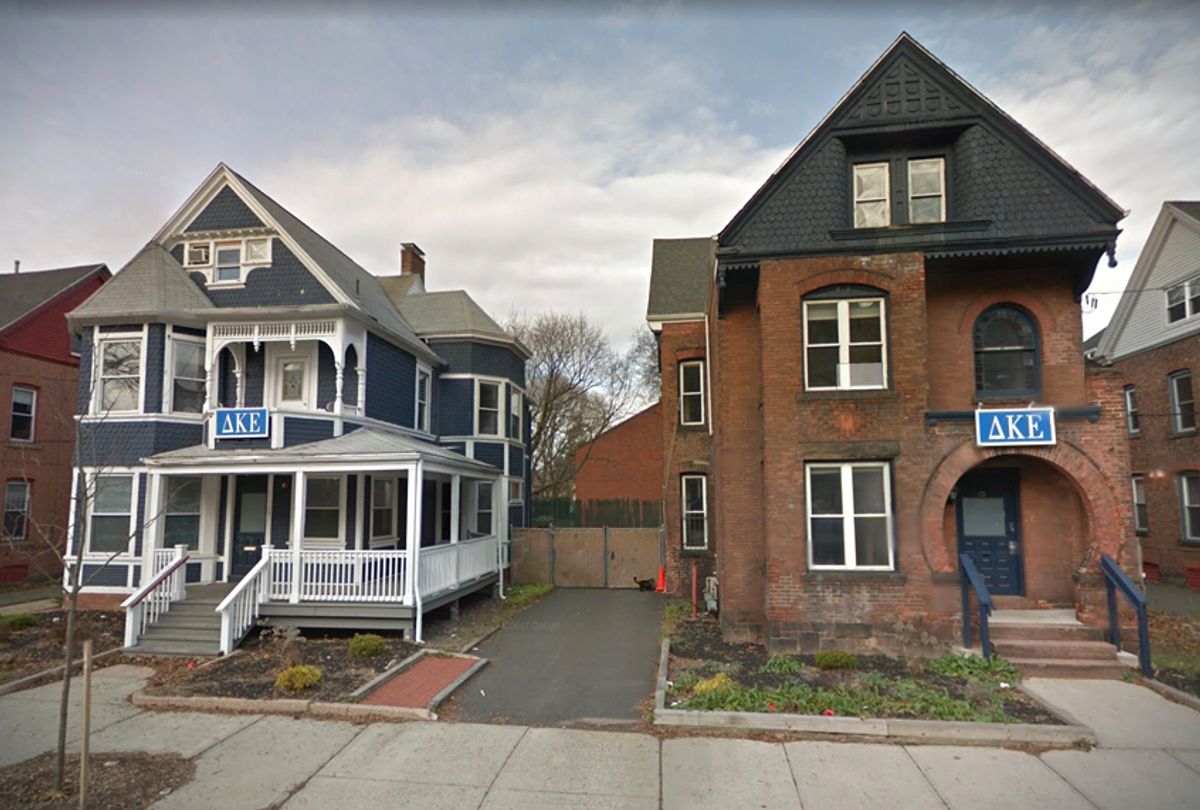 Outrage is easy to come by with the viral video of Yale fraternity pledges being marched around campus last week and ordered to chant about rape. Thanks to the public backlash, members of the Delta Kappa Epsilon chapter have issued an apology and met with the university's Women's Center, and the fraternity's leaders are taking steps to discipline the chapter. But, DKE's politic press releases aside, I've been left feeling like we haven't really heard from the brothers themselves. So, I tracked down a member of DKE's Yale chapter and asked for an interview, promising that I was genuinely extending an olive branch (not of the Ginni Thomas variety). He agreed on the condition of anonymity.

The 20-year-old upperclassman, who has been a DKE member since freshman year, wasn't involved in this particular pledging event, which was carried out by "approximately 15 brothers and 30 pledges," he says. (The chapter has about 90 brothers.) However, the chant itself is "a carry-over from previous years," he says. In other words, this isn't the first time DKE pledges marched around chanting, "No means yes, yes means anal," but he insists that it's the last. I was hoping our chat would challenge some unflattering stereotypes, many of which I've admittedly subscribed to, and it did: Here we have a thoughtful and intelligent guy who, of his own volition, took the time to answer my questions in the middle of his hectic midterms. (He is also, it's worth noting, well-versed in public relations.) But ultimately it raised larger questions about conformity, tradition and the pledging process, wherein thoughtful, intelligent guys are expected to unthinkingly follow passed-down marching orders.

As far as you know, what was the intent behind the chants?

The reality is that there wasn't much intent. Part of the problem was that the chant was carried out without thought to the larger consequences of our actions. Whatever its purpose, it doesn't excuse the inappropriate content of the chant.

Have you seen this sort of thing before at DKE?

This event is without question an anomaly. Since I've been here, DKE has never actively promoted misogyny. This particular incident is an example of a thoughtless and hurtful joke, not an indication of a dangerous culture. This chant was said without thought in previous years on one night of the year. I can assure you, it will be chanted no longer.

How did you find out about the pledge event, and how did you feel about it when you did?

I felt embarrassed, apologetic, and disappointed -- embarrassed by how hurtful our careless actions were to some people, apologetic to all those offended and disappointed in the fact that this unfortunate joke would come to define a group of gentlemen who would never condone sexual violence in any form. I spoke to some of the brothers involved in the event and they described a sickening feeling in their stomach at the time and how it all just felt wrong.

How did your fraternity brothers respond to the news and the backlash that followed?

We immediately understood that what we had done was wrong and inappropriate. The fraternity made no efforts at defending ourselves or trying to justify the event. We immediately apologized to the Women's Center and drafted a public apology to campus. Since then, we have voluntarily met with the Women's Center several times and attended public forums on sexual culture at Yale. We are continuing to make efforts to turn this event into a catalyst for change in sexual culture. Our presence at these forums have become more than just damage control or PR -- these events have caused a lot of genuine introspection, both formal and informal.

What do you make of the national attention this is getting?

I think that a lot of the details of the event are being lost as the story receives national intention -- most specifically, the intent. Many people on campus, even those outraged by the events, understand that the men who chanted offensively would never condone sexual violence. Unfortunately, our fraternity has become a national symbol of fraternal misogyny. At Yale, students are using this event to spark discussion about how college sexual culture can be changed and how we can prevent sexual violence on campus, and are doing a good job of not conflating the culprits of the offensive chant with culprits of sexual violence. In the news and blogs, people are more concerned about whether we will be punished. I think national attention would spark a more useful discussion if the events were kept in context.

How would you describe the general attitude toward women at DKE?

The general attitude is as respectful as anywhere else on campus. I've heard more misogynistic comments elsewhere on campus than in the fraternity. That's not to imply that people don't make mistakes, but DKE is no more inherently misogynistic than Yale at large. Unfortunately, our thoughtless and offensive chanting last week leaves the impression that there are no differences between our words and actions -- which is certainly untrue.

More broadly, how do you think the unflattering stereotype of fraternity culture measures up to reality?

I think that these stereotypes are often perpetuated by people who have little or no personal contact with members of the Greek culture. Anyone involved in fraternities or sororities understands that it is virtually impossible to make any generalizations -- across universities, different fraternities, or even within chapters. Fraternity culture is intentionally diverse, and more importantly, not inherently misogynistic.

Why do you think that frats boys have become such a negative symbol of male, and specifically American male, culture?

The first reason is that fraternities are one of the few remaining all-male institutions still in existence, and therefore have become associated with the misogyny more typical of a previous time. Also, I think many people are disappointed by the unfair privilege they see some fraternity brothers receiving. While this trend may have been true of a previous generation, it is certainly not the case today. I can only speak for brothers at Yale, but no one here received any special job or treatment because they are a member of DKE, and no one joined this fraternity out of professional ambition. Lastly, some people have a misconception about the exclusivity of fraternities, but this is also simply a stereotype, at least for DKE at Yale -- nearly everyone who wants to receive a bid is offered one.

This is a bit of an aside, but I'm curious what you think of the so-called Duke "sex list."

My first reaction was about how unusual and detailed the report was. I then felt sympathy for the individuals whose reputations were ruined by someone else's malicious intentions. Overall, I think the event is an indication of the changing college experience in the 21st century, where anything you do can become national news in an instant.