Army digs in for the long haul in Afghanistan

Despite promised 2011 drawback, the U.S. keeps building new military bases that are made to last 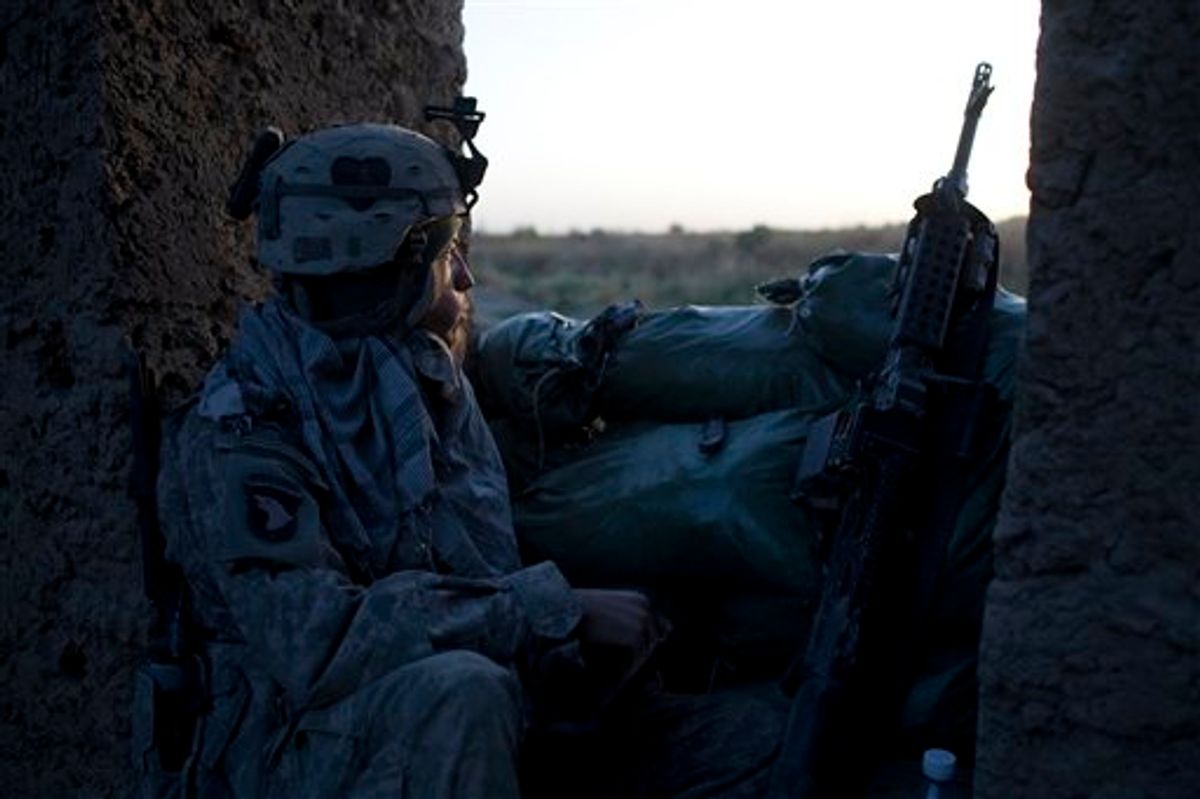 Some go by names steeped in military tradition like Leatherneck and Geronimo. Many sound fake-tough, like Ramrod, Lightning, Cobra, and Wolverine. Some display a local flavor, like Orgun-E, Howz-e-Madad, and Kunduz. All, however, have one thing in common: They are U.S. and allied forward operating bases, also known as FOBs. They are part of a base-building surge that has left the countryside of Afghanistan dotted with military posts, themselves expanding all the time, despite the drawdown of forces promised by President Obama beginning in July 2011.

The U.S. military does not count the exact number of FOBs it has built in Afghanistan, but forward operating bases and other facilities of similar or smaller size make up the bulk of U.S. outposts there. Of the hundreds of U.S. bases in the country, according to Gary Younger, a U.S. public affairs officer with the International Security Assistance Force (ISAF), 77 percent house units of battalion size (approximately 500 to 1,000 troops) or smaller; 20 percent are occupied by units smaller than a Brigade Combat Team (about 3,000 troops); and 3 percent are huge bases, occupied by units larger than a Brigade Combat Team, that generally boast large-scale military command-and-control capabilities and all the amenities of Anytown, USA. Younger tells TomDispatch that ISAF does not centrally track its base construction and up-grading work, nor the money spent on such projects.

However, Major General Kenneth S. Dowd -- the Director of Logistics for U.S. Central Command for three years before leaving the post in June -- offered this partial account of the ongoing Afghan base build-up in the September/October issue of Army Sustainment, the official logistics journal of the Army:

"Military construction projects scheduled for com­pletion over the next 12 months will deliver 4 new runways, ramp space for 8 C−17 transports, and parking for 50 helicopters and 24 close air support and 26 intelligence surveillance and reconnaissance aircraft. This represents roughly one-third of the air­field paving projects currently funded in the Afghanistan theater of operations. Additional minor construction plans called for the construction of over 12 new FOBs and expansion of 18 existing FOBs."

If Dowd offered the barest sketch of some of the projects planned or underway, a TomDispatch analysis of little-noticed U.S. government records and publications, including U.S. Army and Army Corps of Engineers contracting documents and construction-bid solicitations issued over the last five months, fills in the picture. The documents reveal plans for large-scale, expensive Afghan base expansions of every sort and a military that is expecting to pursue its building boom without letup well into the future.  These facts-on-the-ground indicate that, whatever timelines for phased withdrawal may be issued in Washington, the U.S. military is focused on building up, not drawing down, in Afghanistan.

A typical forward operating base set to undergo expansion is FOB Salerno, a post located near the Afghan city of Khost, not far from the Pakistani border. According to documents from the U.S. Army Corps of Engineers, plans are in the works for an expansion of that base's fuel facilities. Estimated to cost $10 million to $25 million, these upgrades will increase fuel storage capacity to one million gallons to enhance land and air operations, and may not be completed for a year and a half; that is, until well into 2012.

In June, work was completed on a new, nearly $12 million runway at Forward Operating Base Shank, near the city of Puli Alam in Logar Province, south of Kabul. The base was formerly accessible only by road and helicopter, but its new 1.4-mile-long airstrip can now accommodate large Lockheed C-130 Hercules and Boeing C-17 Globemaster transport aircraft, enabling ever larger numbers of personnel to be deployed to the site.

Not surprisingly, government documents released in August show that FOB Shank is also set for a major boost in troop housing. Already home to approximately 4,500 military personnel, it will be adding a new two-story barracks, constructed of containerized housing units known as "relocatable buildings" or RLBs, to accommodate 1,100 more troops. Support facilities, access roads, parking areas, new utilities, and other infrastructure required to sustain the housing complex will also be installed for an estimated $5 million to $10 million. In addition, the Army Corps of Engineers just began seeking contractors to add 452,000 square feet of airfield parking space at the base. It's meant for Special Operations Forces' helicopters and fixed-wing aircraft. New aircraft maintenance facilities and 80,000 square feet more of taxiways will also be built at the cost of another $10 million to $25 million.

Documents reveal that this sort of expansion is now going on at a remarkably rapid pace all over the country. For instance, major expansions of infrastructure to support helicopter operations, including increased apron space, taxiways, and tarmac for parking, servicing, loading, and unloading are planned for facilities like FOB Tarin Kowt in Uruzgan Province, FOB Dwyer, a Marine base in Helmand Province, and FOB Sharana, a Paktika Province base near the Pakistani border, where the Army also announced plans for the construction of an ammunition supply facility, with storage space for one million pounds of munitions, and related infrastructure.

In late August, Walter Pincus of the Washington Post reported that construction was slated to begin on at least three $100 million base projects, including FOB Dwyer, that were not "expected to be completed until the latter half of 2011."  In addition to enhancing helicopter operations infrastructure, plans were also announced for the construction of a new, large-scale wastewater treatment facility at Dwyer, a project estimated to cost another $10 million to $25 million and, like so much of what is now being built by the U.S. military in the backlands of Afghanistan, it is not expected to be completed and put fully into use until well into the second half of 2011, if not later -- that is, after President Obama's theoretical due date for beginning to lessen the mission in that country.

And whenever you stumble upon a document indicating that work of a certain sort is taking place at one FOB, you can be sure that, sooner or later, you will find similar work at other FOBs. In this case, for example, FOB Frontenac in Kandahar Province and Tarin Kowt, north of Kandahar, are, like Dwyer, slated to receive new wastewater plants.

Much of this work may sound mundane, but the scale of it isn't. Typical is another of the bases identified by Pincus, FOB Shindand in western Afghanistan, which is to receive, among other things, new security fencing, new guard towers, and new underground electrical lines. And that's just to begin the list of enhancements at Shindand, including earthen berms for four 200,000-gallon "expeditionary fuel bladders and a concrete pad suitable for parking and operating fourteen R-11 refueling vehicles" -- tanker trucks with a 6,000-gallon capacity -- as well as new passenger processing and cargo handling facilities (an $18 million contract) and an expansion of helicopter facilities (another $25 million to $50 million).

Multiply this, FOB by FOB, the length and breadth of Afghanistan, and you have a building program fit for a long war.

This building boom has hardly been confined to FOBs. Construction and expansion work at bases far larger than FOBs, including the mega-bases at Bagram and Kandahar, is ongoing, often at a startling pace. The Army, for example, has indicated it plans to build a 24,000 square-foot, $10-million command-and-control facility as well as a "Joint Defense Operations Center" with supporting amenities -- from water storage tanks to outdoor landscaping -- at Bagram Air Base. At bustling Kandahar Air Field, the military has offered contracts for a variety of upgrades, including a $28.5 million deal for the construction of an outdoor shelter for fighter aircraft, as well as new operations and maintenance facilities and more apron space, among a host of other improvements.

In June, Noah Shachtman of Wired.com's Danger Room reported on the Army's plans to expand its Special Operations headquarters at Mazar-e-Sharif in northern Afghanistan and cited documents indicating that construction would include a "communications building, Tactical Operations Center, training facility, medical aid station, Vehicle Maintenance Facility... dining facility, laundry facility, and a kennel to support working dogs."  A contract for that work, worth $30 million, was awarded at the end of September.

Similarly, according to a recent article in the Marine Corps Times, Camp Leatherneck, which expanded in late 2009 from a 660-acre facility to 1,550 acres, or approximately 2.4 square miles, is slated to add three new gyms to the one already there, as well as a chapel complex with three separate buildings (one big enough to accommodate up to 200 people), a second mess hall (capable of serving 4,000 Marines at a time), a new PX housed in a big-top tent, with 10,000 square feet of sales space -- the current base facility only has 3,000 square feet -- and the installation of a $200 million runway that can accommodate C-5 cargo planes and 747 passenger jets.

Despite a pledge from the Obama administration to begin its troop drawdowns next July, this ongoing base-construction splurge, when put together with recent signals from the White House, civilians at the Pentagon, and top military commanders, including Afghan war chief General David Petraeus, suggests that the process may be drawn out over many years. During a recent interview with ABC News Senior Foreign Affairs Correspondent Martha Raddatz, for instance, Petraeus affirmed the president's July 2011 timeline, but added a crucial caveat. "It will be a pace that is determined by conditions," he said.

Almost a decade into the Afghan War, he claimed, the U.S. military had "finally gotten the inputs right in Afghanistan."  Raddatz then asked if the "counterinsurgency clock" had just restarted -- if, that is, it could be another nine or ten years to achieve success. "Yeah," replied Petraeus, hastening to add that American soldiers killed there over the previous nine years had not simply died for nothing. "But it is just at this point that we feel that we do have the organizations that we learned in Iraq and from history are necessary for the conduct that this kind of campaign."

The building boom occurring on U.S. bases across Afghanistan and the contracts for future construction being awarded at the moment seem to confirm that, whatever the White House has in mind, the military is operating on something closer to the Petraeus timeline. The new Special Operations base at Mazar-e-Sharif, to take but one of many examples, may not be completed and fully occupied for at least a year and a half. Other construction contracts, not yet even awarded, are expected to take a year or more to complete. And military timelines suggest that, if the Pentagon gets its way, American troop levels may not dip below the numbers present when Obama took office, approximately 36,000 troops, until 2016 or beyond.

At the moment, the American people are being offered one story about how the American war in Afghanistan is to proceed, while in Afghanistan their tax dollars are being invested in another trajectory entirely. The question is: How permanent are U.S. bases in Afghanistan?  And if they are not meant to be used for a decade or more to come, why is the Pentagon still building as if they were?

Recently, the Army sought bids from contractors willing to supply power plants and supporting fuel systems at forward operating bases in Afghanistan for up to five years. Power plants, fuel systems, and the bases on which they are being built are facts on the ground. Such facts carry a weight of their own, and offer a window into U.S. designs in Afghanistan that may be at least as relevant as anything Barack Obama or his aides have been saying about draw-downs, deadlines, or future withdrawal plans.

If you want to ask hard questions about America's Afghan War, start with those bases.