In defense of film and TV "hoaxes"

From "Jersey Shore" to "Catfish," lines between fiction and reality are being blurred. Don't fret -- just enjoy it 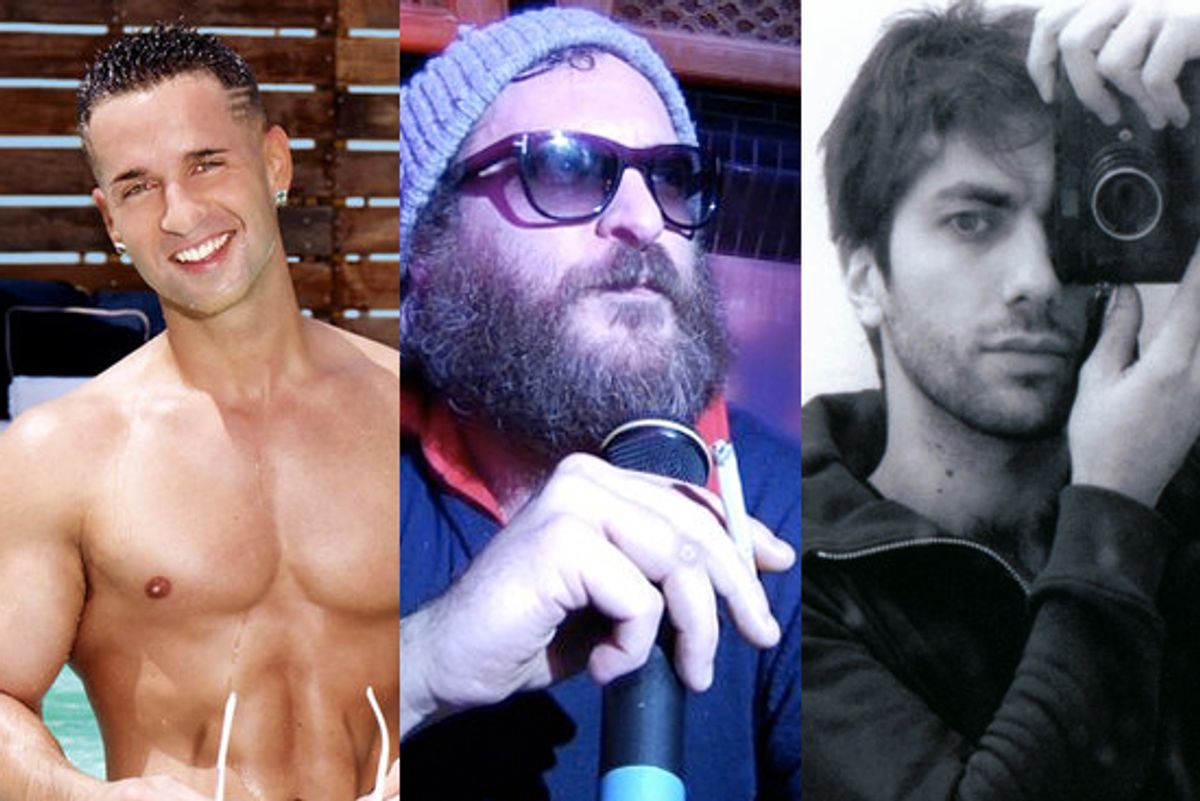 "All stories are fiction." That was the title of a monologue by playwright Mike Daisey. It's worth keeping in mind when you're watching or reading about a work that's drawn from life but that doesn't quite look or feel like a documentary. It's not a difficult concept, and it's certainly not new. But when I read articles about some of the more prominent recent examples -- the feature films "I'm Still Here" and "Catfish," for instance, or MTV's "Jersey Shore," which concluded its second season last night -- I get the impression that not everybody got the memo.

Don't get me wrong: When you're watching anything that purports to be nonfiction, a certain skepticism is healthy. But as I see news stories, reviews and op-ed pieces talking about how this or that nonfiction movie is a "hoax" -- particularly "Catfish," "Exit Through the Gift Shop" and "I'm Still Here," all of which are, to a certain extent, about performance, and our willingness to be fooled by performers -- I have to marvel at the selectivity with which certain movies are being made targets for hand-wringing. There's not a lot of rhyme or reason to it. And in the end, fretting over the "hoax" issue too much is a misallocation of critical resources, akin to reading a book's forward and footnotes while ignoring the main text.

What's on the screen? What is the story about? What are the storytellers trying to say about human nature, about life on earth right now? These are the critical questions -- not, "In 'I'm Still Here,' was Joaquin Phoenix really crazy or just pretending?" or "Was Thierry Guetta, the original director of 'Exit Through the Gift Shop,' ever really in charge of the project, or was he just a puppet of his subject, the prankster artist Banksy, from the start?"

Such projects aren't in the same vein as, say, "Hoop Dreams" or "Crumb" or "Capturing the Friedmans," or even such Errol Morris documentaries as "The Thin Blue Line" and "Fast Cheap and Out of Control," which mix interviews and traditional reporting with highly stylized re-enactments and hypothetical imaginings. Movies such as "Catfish," "Exit Through the Gift Shop" and "I'm Still Here" aren't straightforward documentaries and aren't presented as such. As you watch them, you ask, "Am I being had? And if so, is it because I want to be?" That you're constantly asking those questions doesn't reflect poorly on the work. Quite the contrary. Such works exist, at least in part, to prompt those sorts of questions.

Just as there isn't a single definition of what constitutes an aesthetically or morally acceptable fiction film, there is no fixed definition covering all work that's drawn from reality. Implying that there is -- an implication built into any article that fixates on whether the aforementioned films are "hoaxes" -- reduces storytelling to record-keeping. It also ignores the possibility that filmmakers might not all have the exact same agenda -- and that viewers aren't all credulous dolts, and that many of them might have a God-given intuitive ability to figure out what a film or TV program is trying to say and do, and adjust their expectations (and b.s. detectors) accordingly.

Is it really "realistic" that members of the "Jersey Shore" cast would have a compelling reason to work in a Miami ice cream shop? Of course not. They're unlikely celebrities, of such magnitude that they probably can't remember the last time they had to pay for anything. Using the word "realistic" in relation to such a program suggests that documentary truth is among its goals when it plainly isn't. "Why do they have to pretend to have jobs for the show?" wrote L.J. Gibbs at TV Fanatic. "This is baffling. That said, every scene there is funny. Maybe that's the answer." That's part of the answer, but the rest is bound up in the nature of the show. "Jersey Shore" isn't a strict factual record of people going on about their lives while cameras look on (a concept that's inherently problematic anyway, as any documentarian or TV news reporter will tell you). It's one of TV's most popular current examples of a hybrid format, part documentary, part amateur acting display, part sociological experiment. It's presented under the rubric of "unscripted television," a term that is slowly but surely replacing the misleading 1990s catchphrase "reality TV."

The form has been at the center of popular culture ever since "The Real World" debuted in 1992. Some of the more successful examples -- remember how huge "Survivor," "The Amazing Race" and "The Real World" used to be? -- are so far removed from everyday existence that they bear about as much relation to documentaries as science fiction epics bear to low-budget indie dramas. You have to accept the nature of what you're dealing with and engage with it on its own terms. Untold millions of people watch "Jersey Shore" and other unscripted series. They intuitively understand that what they're seeing is an improvised story, performed on the fly by nonprofessional actors drawing on their personalities and imaginations -- a mook version of "Whose Line is it Anyway?" Viewers of such programs don't expect the same fidelity to realism that they might demand from, say, "Deadliest Catch," which is closer to a traditional fly-on-the-wall documentary about people at work. When a show or movie doesn't adhere to fly-on-the-wall standards, that doesn't mean it's valueless, or that it can be reduced and dismissed with a word such as "hoax."

What a loaded, weirdly 19th century word "hoax" is. To type it without irony is a strange affectation. It's ignorant of film history. And it doesn't account for the possibility that a nonfiction tale told with moving pictures might be worth seeing and talking about even if it toys with viewers' perceptions, fudges particulars, or outright stages things for the camera. Robert Flaherty captured the world's imagination with the heavily staged Inuit epic "Nanook of the North." The work remains fascinating -- and anthropologically valuable -- even though not everything in it would have occurred if Flaherty and his crew hadn't been wandering around above the Arctic circle in search of material. The tribespeople built a special three-walled igloo to give Flaherty better camera angles and lighting, but that doesn't mean the details of life within that igloo are inaccurate or that the film is a pack of lies. "If you stage a walrus hunt, it still involves hunting a walrus, and the walrus hasn't seen the script," observed Roger Ebert -- a great observation by a critic who recently became fixated on the question of whether "I'm Still Here" was a "hoax."

If you stage a famous actor's "meltdown" ("I'm Still Here") or a documentarian's manipulation by another filmmaker ("Exit Through the Gift Shop"), the result might still have plenty of useful things to tell us about filmmaking, celebrity, the media, and the interplay of art and life. If the people behind these films had acknowledged from the outset that they were creating a sort of fiendishly elaborate street theater, staged for the benefit of cameras and intended to be edited later, there might not have been a movie to see -- and if there were a movie to see, it wouldn't be nearly as effective at getting us to ponder our own eagerness to believe the camera never lies. "Ultimately, wondering whether 'Exit Through the Gift Shop' is real or not may be moot," wrote Melina Ryzik in The New York Times. It certainly asks real questions: about the value of authenticity, financially and aesthetically; about what it means to be a superstar in a subculture built on shunning the mainstream; about how sensibly that culture judges, and monetizes, talent." Yep.

"I wish people hadn't debated so much the film's veracity or authenticity, hadn't asked only and dully, 'Is this real?'" Affleck later told Ebert. "But that response is better than apathy, I suppose. Picasso said, 'Art is the lie that tells the truth.'" Affleck continued, "I was making a movie. In a movie we try to deceive. In theaters, as they say, the deceived are the wisest. I was trying to help the audience suspend their disbelief. That is why the film was released without comment from myself or anyone involved. The reason it was made without comment, and with Joaquin in character when in public, was because the media plays a role in the film and the media would not have played their role as well as they did had it been acknowledged that Joaquin was only performing. When I say the media I mean also the unpaid bloggers and vloggers and people all around the world commenting online."

Werner Herzog, no stranger to applying fictional storytelling techniques to real world subject matter, got at this issue in a speech that he delivered to students in Milan after screening his documentary "Lessons of Darkness." Herzog talks about how the last two decades have "posed unprecedented challenges to our concept of reality," and mentions computer-generated special effects and unscripted TV series as manifestations of that.

But then he goes on: "We must ask of reality: how important is it, really? And: how important, really, is the Factual? Of course, we can’t disregard the factual; it has normative power. But it can never give us the kind of illumination, the ecstatic flash, from which Truth emerges. If only the factual, upon which the so-called cinéma vérité fixates, were of significance, then one could argue that the vérité—the truth—at its most concentrated must reside in the telephone book."

Even better is a Herzog quote higher up in the speech, a phrase that ought to serve as pre-emptive rebuke to anyone scolding as deceptive a film whose entire purpose is to mess with our heads: "To acknowledge a fake as fake contributes only to the triumph of accountants."