Bill Clinton and Terry McAuliffe to the rescue? 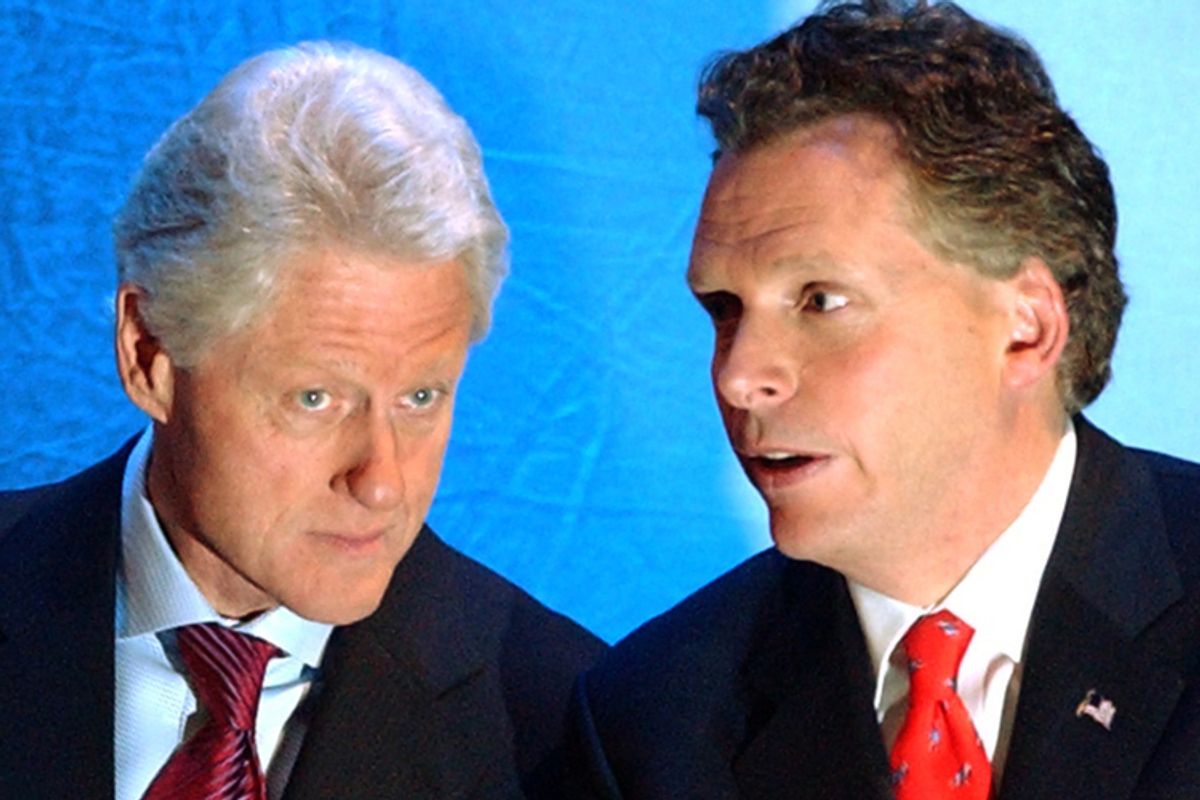 Oh god, not another one of these! The Washington Post has what aspires to be a big, buzzy piece this morning about the valiant effort that Bill Clinton and Terry McAuliffe are making to correct their party's flawed "messaging" and to rescue it from a midterm election debacle.

The former president, we are told, is "baffled" and "in disbelief" that Democrats "have failed to articulate a coherent message on the economy and, worse, have allowed themselves to become 'human pinatas.'" We also learn that he and his buddy Terry McAuliffe stayed up late a few weeks ago "playing cards and drafting new talking points for Democrats to trot out on the trail":

"He literally sat down with a yellow legal pad," said McAuliffe, a former chairman of the Democratic National Committee, adding that Clinton told him: "Make sure, Terry, you get these talking points out to every candidate."

It was then, McAuliffe said, that Clinton confided that he has been frustrated with the Democrats' message.

"He is just baffled and bewildered about why there has not been a more coherent message talking about what the party has done, why we allowed ourselves to become human pinatas," McAuliffe said. "I think he is agitated that Democrats haven't put their best foot forward in explaining to the American public what they've actually done."

And on and on it goes; a 1,682-word valentine to Clinton's (completely explainable) surge in popularity and his overstated and misunderstood ability to "connect" with voters. Only in passing does author Philip Rucker note the walloping that Clinton's party suffered in the 1994 midterms, when he was president. And nowhere does he mention that McAuliffe failed miserably in his own campaign for governor of Virginia last year.

These are not insignificant omissions. The idea that Clinton, with his gushing empathy and butter-smooth Southern drawl, somehow has a magic formula that Barack Obama is missing -- and that, if employed, could spare the Democrats a midterm drubbing -- is just silly.

As I've noted before, you'll get no dispute from me that Clinton is a masterful communicator -- maybe the best that Democrats have produced in the modern era. But his own presidency proved the limits of those skills. He was just as strong a communicator in 1994, when the political climate was aligned against him and his party -- but no matter how hard he tried, and no matter how many times he tweaked his messaging, he just couldn't "connect" with the voters who were angry at Democrats. That he now seems to believe "messaging" can save Obama and the Democrats is, well, baffling. (Unless he just likes reading stories in major national papers that celebrate his political genius at the expense of the man who bested his wife in the 2008 Democratic race...)

McAuliffe should know better, too. His gubernatorial campaign is a case study in the limits of "messaging." McAuliffe probably used the word "jobs" more than any other candidate in world history while seeking the Democratic nomination. On paper, it was a great message, given where the economy was (and given his own background in business). But if anything, there was an inverse relationship between his emphasis on jobs and his poll standing; when the primary finally arrived, McAuliffe was wiped out. In politics, saying the right words can sometimes be worth nothing.