The strangest part is, for decades, I believed him 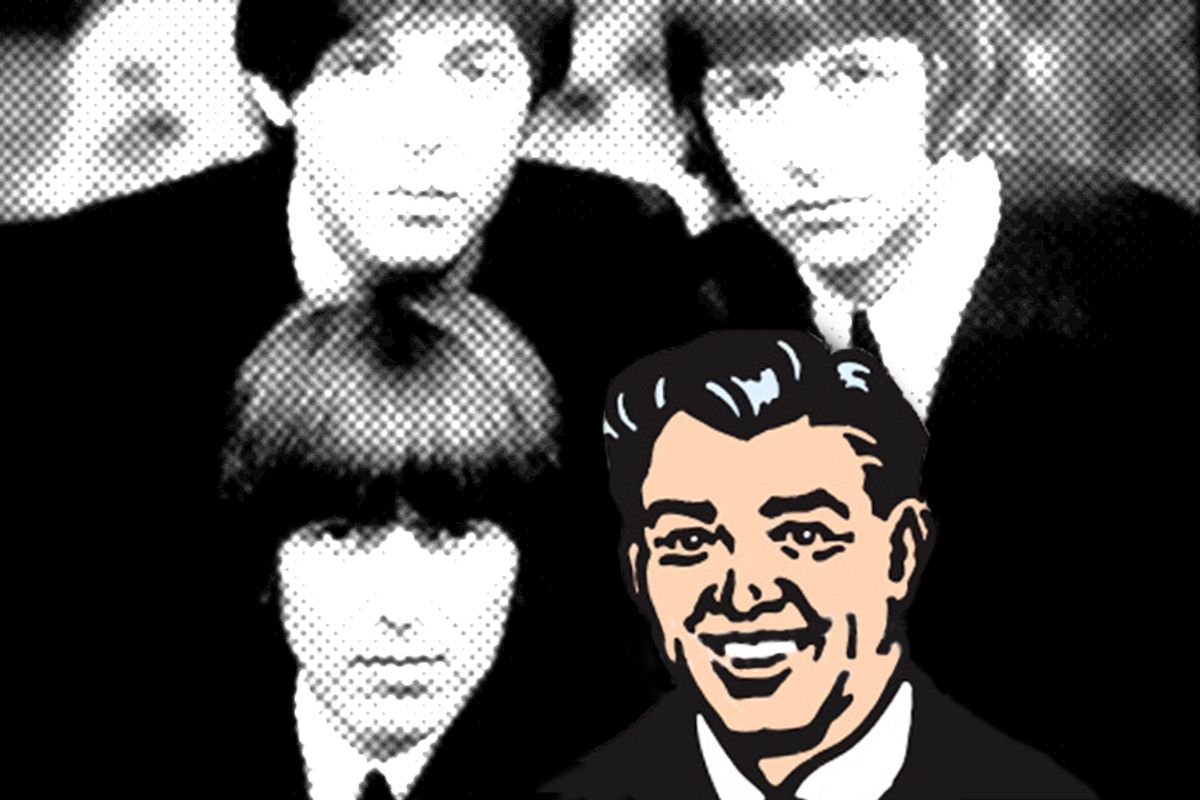 When the world first learned John Lennon had died, I was taking a bath. From down the hallway, I could hear Howard Cosell interrupt Monday Night Football: "The most famous, perhaps, of all of the Beatles, shot twice in the back, rushed to Roosevelt Hospital, dead on arrival."

"God did that!" screamed my dad from the living room.

"God did that to him," he repeated, "for stealing my song."

Dad believed – still believes – that he wrote the lyrics to "Lady Madonna," which reached Number 4 on the Billboard Music Charts in 1968. "Believes" is actually too weak a word. He knows; he remembers. He says to strangers, "You know the Beatles stole my song, don't you?" It is a fact to him, like his shoe size, like his hometown. This is a hallmark of his life, and my inheritance.

There were early signs that the claim was not, indeed, true. For example, my dad also says that he wrote the theme to the 1966 television show "Batman." Mind you, he doesn't read music, he only writes lyrics, and here are all the words to that song: Batman. He has claimed authorship of songs by Three Dog Night, Elvis and the Romantics. He also invented many things, he says, including wind surfing. I don't believe any of that, but "Lady Madonna?" Maybe.

My dad says "Lady Madonna" is a song about his mother. About working to keep a family together as a single woman with five children. It's about life's never-ending grind, about each day flowing into another. All that fits my grandmother's story. The song itself came at a transition time in the Beatles' career, released right before they left Capitol to start Apple Records. It came out as a single but never appeared on any album, sandwiched awkwardly in the middle of their career. Was it possible my father wrote the song? Stranger things have happened. And because it seemed to cost me nothing, I let the threads of Dad's story hold.

This proclivity to reserve judgment pervades my life. I am at once skeptical and credulous – a brain filled with opinions that are sharp but wavering, especially when confronted by someone else's passionate belief. This is the direct result, I think, of having been raised by a man like my father. I either had to believe the world is filled with treachery and can't be trusted or that the primary male figure in my life is delusional. I grew to realize those are not mutually exclusive.

But lately, at the age of 40, I have grown tired of magical thinking. Weary of a story that has pestered me for 30 years. And so I did what I probably needed to do years ago: I confronted my dad.

Off the main drag are the hollers and hills of an earlier Ozarks, where palatial estates are a quick minute from trailer homes. My dad lives in an apartment not too far from Table Rock Lake. He moved to the area from Denver 12 years ago to get away from a gambling problem and try to sell a country song he has worked on for 40 years.

He doesn't stick out in a crowd, physically. Dad is 68, medium height and build. He slicks back his hair, now cloud white instead of jet black. He wears a thin white mustache, dress slacks and an oxford shirt, which gives him an air of credibility. But when he talks, everything changes. He's got the rhythm and speed of a hustler. In fact, he is a salesman -- he has sold everything from coffee to family portraits to neon signs. He sells advertisements for a restaurant guide these days and he's good at it. As we drive through the hills of West Branson to the Strip, he says, "I didn't know you were interested in this."

In late 1963, at the age of 21, Dad hitchhiked from Omaha to Downey, Calif., to live with his only sister. When he got there, it was clear he was not welcome, nor was his brother Bill, who had been hanging around for months. "So we stole a car and went to Oakland," Dad tells me. "Well, it was your aunt's car, so it wasn't really stealing."

When they got to Oakland, they needed money and, as my dad obsessively points out, Bill is lazy. So they did the obvious thing – started writing hit song lyrics to sell to major recording artists. According to my dad's story this time (it's rarely the same) they went on a most amazing run. "Lady Madonna," "Eight Days a Week," "I Saw Her Standing There" and others. They stayed in Oakland until the summer of 1964 and then Bill got restless. He asked my dad what he should do with the songs. Dad told him, "I don't care -- send them to the Beatles." Bill hitchhiked back to Nebraska. He got nabbed for shoplifting there and was sent to jail for breaking the conditions of his probation. After serving a month in jail, Bill was assigned a parole officer he trusted. He gave his P.O. the original lyrics, because he thought they would be safe there and sent a set of copies to Capitol Records. The P.O. lost the originals. Bill corroborates much of this story. Then again, Bill believes he's Elvis Presley's cousin.

While Dad talks, my wife sits in the back seat and Googles the songs he mentions on her smart phone. There's a problem, she texts me: "I Saw Her Standing There" was released in March of 1963. I'm not ready to bring this up yet.

We eat at McFarlain's, a very good home-cooking restaurant in the IMAX Entertainment Complex on the Branson Strip. Dad skips to the part where he and Bill were together again, in another car of dubious ownership, when "Lady Madonna" came on the radio. It was early 1968. They heard the song and immediately knew it was theirs.

Dad tells me, "I said, 'What did you do, Bill?' " This is an important part of the story for Dad: It's all Bill's fault. They found the closest record store and looked for the sheet music.

"That's how I know they stole it," Dad says. "Instead of saying McCartney and Lennon on it, it said Anonymous."

As we drive back to his apartment, he mentions that the Beatles played "Lady Madonna" too fast; he had a slower song in mind. I realize, with excitement, that it never occurred to me to have him sing it – what was the tune he had in his head?

"Sing your version," I say.

"Lady … Madonna … children at your … feet," he sings. It's the same tune, just much slower, and I'm a little disappointed.

When we get back to my dad's apartment, I get up the nerve to tell him one of the songs he claims to have written came out before he moved to California.

"That's strange," he says, his voice growing instantly sad or tired, I'm not sure which.

"Do you think you might be misremembering that song? Maybe you just wrote 'Lady Madonna.'"

"You must have written it before you left for California. If you wrote it, you must have sent it, not Bill."

I sit on the couch, staring at my wife, who is sitting on a kitchen chair about five feet away. We don't talk. I think of a Christmas four years ago, when my father asked me a rare question.

I had a half-brother whom my dad adopted when he married my mom. They didn't get along, and my brother didn't speak with my dad for 20 years. In 2005, my brother took his life and I had to deliver the news to Dad. He didn't cry, but he's never mentioned him again. I am his only son and I guess I have been for years. If I don't believe him, what does that mean?

But even though he didn't write it, I also do believe him in a strange way. I believe that he believes this. He is lying, but he is also telling the truth. This happens: We become ensnared in our own myths. There's always a little room, somewhere, for lies to live.

There was still room for me to believe it, too. The truth about this story hinged on one piece of evidence for me: the original sheet music. I decided to track it down, and if it said, "Anonymous," why not trust my dad? After searching libraries, music shops, eBay and Craigslist, I found an autographed version of the original sheet music on an obscure website. The cost: $1,499, but there were multiple images, including one shot of the title page. I clicked on it. On the top right side of the page, it read:

Recently I watched "Nowhere Boy," a movie about John Lennon growing up in Liverpool. He and my dad had similar childhoods. They were both raised without a father, both rebelled and did poorly in school, both obsessed about their mothers. Both created larger-than-life mythologies about their prowess as fighters and lovers and writers. It's interesting how Lennon's mythologies drove him to become a living legend: it fueled him to learn guitar and start a band with someone more talented than himself, someone who could actually write at the time. It fueled him through the media attention and the madness. But my father's mythologies just left him aggrieved and disconnected, further from the rest of us, stuck in his own tales of loss and defeat, over and over again.

I wish my dad's stories could have inspired him to do great things instead of simply believing he did them and feeling cheated. He should have done great things. He is a survivor. He is a good father in many ways. That's why I held on to that story for so long, too -- not just because I love him, or because I don't want to disrupt his delusions. But because I wanted that greatness for him, too.

My father and I talk on the phone soon after I find the sheet music. He tells me about his old country song he's still trying to sell and some children's books he's written. This is our usual pattern – he recites these projects each time, then he asks, "What do you think?"