Iraq war leaks: No U.S. investigation of many abuses 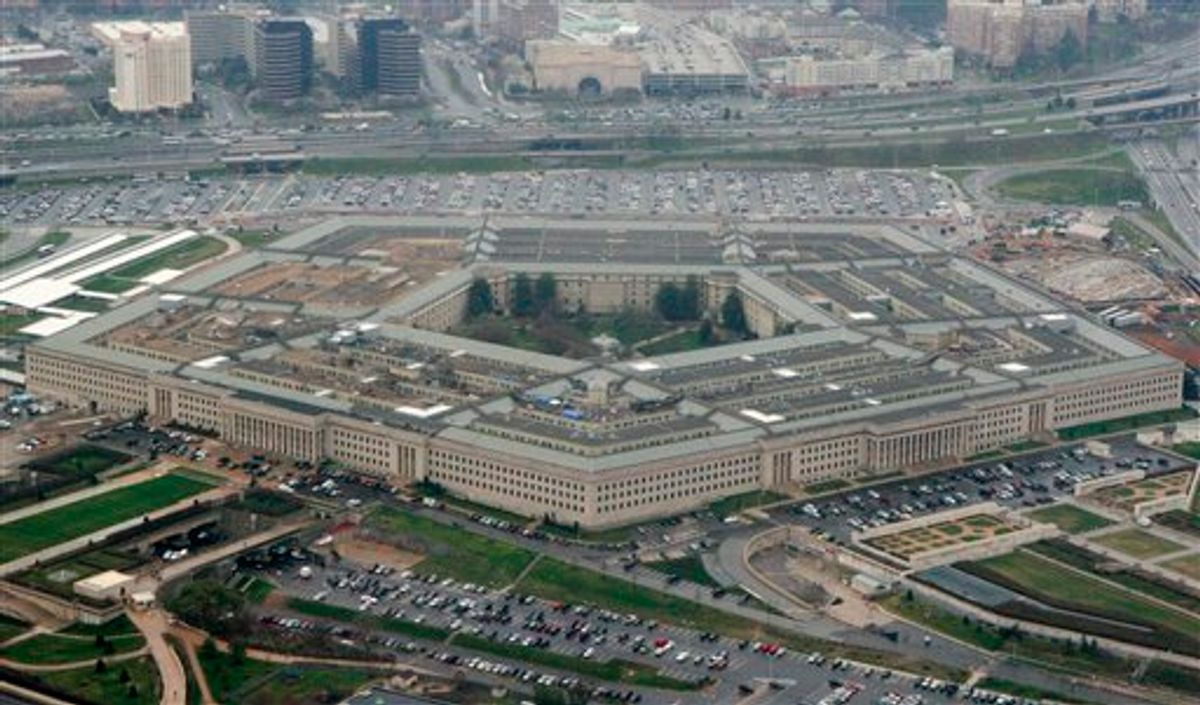 File - The Pentagon is seen in this aerial view in Washington, in this March 27, 2008 file photo. The WikiLeaks website appears close to releasing what the Pentagon fears is the largest cache of secret U.S. documents in history _ hundreds of thousands of intelligence reports compiled after the 2003 invasion of Iraq. In a message posted to its Twitter page on Thursday Oct. 21, 2010, the organization said there was a "major WikiLeaks press conference in Europe coming up." (AP Photo/Charles Dharapak, File) (AP)
--

U.S. forces often failed to follow up on credible evidence that Iraqi forces mistreated, tortured and killed their captives in the battle against a violent insurgency, according to accounts contained in what was purportedly the largest leak of secret information in U.S. history.

The documents are among nearly 400,000 released Friday by the WikiLeaks website in defiance of Pentagon insistence that the action puts the lives of U.S. troops and their coalition partners at risk.

Although the documents appear to be authentic, their origin could not be independently confirmed, and WikiLeaks declined to offer any details about them. The Pentagon has previously declined to confirm the authenticity of WikiLeaks-released records, but it has employed more than 100 U.S. analysts to review what was previously released and has never indicated that any past WikiLeaks releases were inaccurate.

The 391,831 documents date from the start of 2004 to Jan. 1, 2010, mostly by low-ranking officers in the field. In terse, dry language, they catalog thousands of battles with insurgents and roadside bomb attacks, along with equipment failures and shootings by civilian contractors.

The United States went to war in part to end the brutality of Saddam Hussein's regime, but the WikiLeaks material depicts American officers caught in a complicated and chaotic conflict in which they often did little but report to their superiors when they found evidence that their Iraqi allies were committing their own abuses.

In some cases, the reports show the U.S. military intervening to protect detainees, but in many others officers did not act on what their troops described as clear evidence of abuse.

Allegations of torture and brutality by Shiite-dominated security forces -- mostly against Sunni prisoners -- were widely reported during the most violent years of the war when the rival Islamic sects turned on one another in Baghdad and other cities. The leaked documents provide a ground's eye view of abuses as reported by U.S. military personnel to their superiors, and appear to corroborate much of the past reporting.

WikiLeaks said it provided unredacted versions of the reports weeks ahead of time to several news organizations, including the New York Times, Le Monde, The Guardian and Der Spiegel. It gave The Associated Press and several other news organizations access to a searchable, redacted database hours before its general release Friday.

WikiLeaks was criticized for not redacting the names of informants in a July release of almost 77,000 documents from the Afghan conflict. This time, it appears to have removed the names of people, countries and groups from the searchable database.

WikiLeaks declined to make unredacted files available to the AP, saying journalists wanting such a copy would have to lodge a request with the organization, which would respond within a "couple of days."

The group describes itself as a public service organization whose mission is to "protect whistle-blowers, journalists and activists who have sensitive materials to communicate to the public."

WikiLeaks editor-in-chief Julian Assange did not respond to an e-mail from the AP seeking comment but told CNN that the documents show "compelling evidence of war crimes," both by the U.S.-led coalition and the Iraqi government. Such comments from Assange have drawn controversy in the past.

Assange rejected claims that his work was endangering anyone.

The military has a continuing investigation into how the documents were leaked. An Army intelligence analyst stationed in Iraq, Spc. Bradley Manning, was arrested in connection with the leaking other classified material to WikiLeaks.

He said about 300 Iraqis mentioned in the documents are "particularly vulnerable to reprisal attacks" and that U.S. forces in Iraq are trying to protect them.

The documents appeared to be mostly contemporaneous -- routine field accounts that junior officers in units deployed across Iraq sent to headquarters within Iraq during the course of the war.

The leaked documents include hundreds of reports from across Iraq with allegations of abuse. In a typical case from August 2006, filed by the 101st Airborne, U.S. forces discovered a murder suspect who claimed that Iraqi police hung him from the ceiling by handcuffs, tortured him with boiling water and beat him with rods.

The suspect, detained at the Diyala provincial jail, showed evidence of abuse, including bruises on his wrists, back, and knees. The 101st notified the office of Iraqi Prime Minister Nouri al-Maliki, and the case was closed, according to the documents.

In another case, U.S. soldiers inspecting an Iraq army base quizzed their Iraqi counterparts about a scab-covered detainee with two black eyes and a neck which had turned, in the words of the report, "red/yellow." The prisoner said he had been electrocuted. Iraqi officials claimed the man received the injuries while trying to escape, according to the report.

In one case, a U.S. State Department employee prevented a prisoner from being beaten, the documents show.

One report describes U.S. troops finding evidence of torture at a police station in Husaybah, including large amounts of blood, a wire used for electric shocks and a rubber hose. It describes ensuing visits by the Americans, checking of detention cells and demands for records on every prisoner.

"The detention cell officers have been counseled on the severe negative ramifications to relations with the coalition forces if human rights are not respected," it reads.

As a general policy, U.S. forces in Iraq were supposed to take reasonable action to stop or prevent abuse. Morrell said U.S. troops are required to report any abuses they witness to their superiors and that U.S. policy has been to share that information with the Iraqi government "at the appropriate level."

U.S. diplomats and military commanders in Iraq have said that U.S. and allied military forces in Iraq tried to deter abuse, although U.S. officials do not deny that torture or mistreatment has occurred.

Amnesty International called on the U.S. to investigate how much its officials knew about torture when they handed over thousands of detainees to Iraqi security forces.

Some of the reports released Friday are laconic, barely a line long: "Individual stated she was beaten and raped for not cooperating with IP (Iraqi police) investigator," one November 2007 report filed from Tikrit said.

Others offer more a more detailed description of the abuse -- and evidence.

U.S. Marines patrolling Husaybah found a man in the custody of Iraqi forces who said he was pulled out of a taxi, blindfolded, beaten and kept in a room for three days, one of the reports says. It cites medical documents and pictures of the man's injuries as evidence that his allegation of abuse is substantiated. "No further investigation is warranted," it reads.

A "serious incident report" filed in December 2009 in Tal Afar said U.S. forces had obtained footage of about a dozen Iraqi army soldiers -- including a major -- executing a detainee. The video showed the bound prisoner being pushed into the street and shot, the Americans said. There was no indication of what happened to the video, or to the Iraqi major or his soldiers. The incident is marked "closed."

The release of the documents comes at a pivotal time for the U.S. in Iraq as the military prepares to withdraw all 50,000 remaining troops from the country by the end of next year. The U.S. military had as many as 170,000 troops in Iraq in 2007.

Violence has declined sharply over the past two years, but near-daily bombings and shootings continue.

The situation has been exacerbated by growing frustration among the public over the failure of Iraqi politicians to form a new government. Al-Maliki is struggling to remain in power since his Shiite alliance narrowly lost the March 7 vote to a Sunni-backed bloc led by rival Ayad Allawi.

Some of the documents focus on the actions of coalition troops. A report from February 2007 describes a combat helicopter being dispatched to destroy a truck carrying a mortar tube that had just been used in an attack. Two insurgents get into another truck and drive away, then attempt to surrender after they are fired on. When they attempt to drive away a second time, a military lawyer advises the helicopter that "They can not surrender to aircraft and are still valid targets." The helicopter opens fire, with a missile, driving the insurgents into a shack before opening fire again and killing them.

The reports also document civilian contractors working for the military firing on cars that drove too close to their convoys, fearing the vehicles might be driven by suicide bombers.

The documents also provided new details about one of the most contentious issues of the war -- civilian casualties.

The U.S. military has recorded just over 66,000 civilian deaths, according to the documents posted by WikiLeaks. Iraq Body Count, a private, British-based group that has tracked the number of Iraqi civilians killed since the war began, said in a press release that it had analyzed the information and found 15,000 previously unreported deaths, which would raise its total from as many as 107,369 civilians to more than 122,000 civilians.

The Iraqi government has issued a tally claiming at least 85,694 deaths of civilians and security officials were killed between January 2004 to Oct. 31, 2008.