Mondale on Obama, and how he could've beat Reagan

The former vice president talks with Salon about what we can learn from the Reagan era, and his missed opportunity 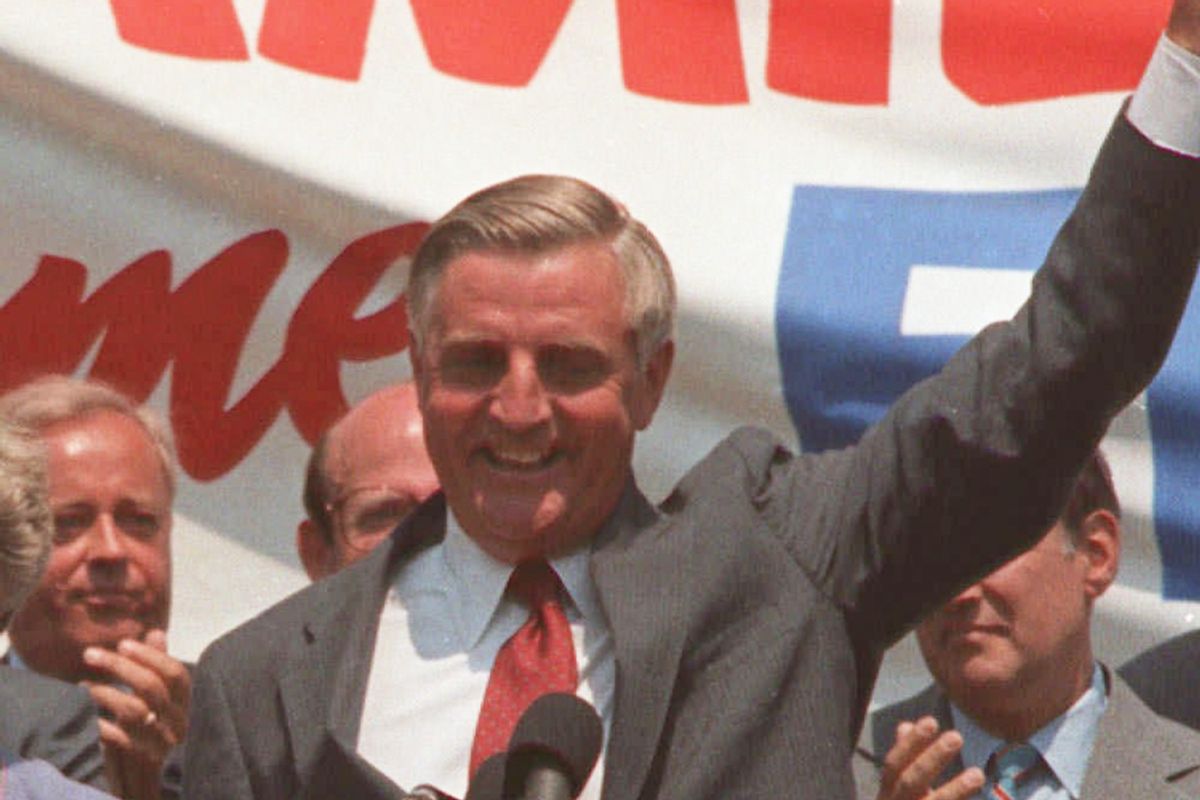 You know the basic midterm narrative: The GOP, written off by pundits as a dying party after Barack Obama's sweeping 2008 victory, has staged a remarkable revival and is now poised to deliver a brutal blow to the first-term president on Nov. 2. Republicans are already celebrating their comeback — and promising an even bigger year in 2012.

His party's obituary was written by the press after the 1980 election, when Ronald Reagan capitalized on stagflation to score a 44-state landslide over Jimmy Carter. Just like Obama, Reagan came to power with enormous expectations and soaring popularity — only to watch it all melt away in his first two years on the job, thanks to a brutal recession and double-digit unemployment. In the 1982 midterms, Democrats picked up more than two dozen House seats — a more impressive feat than it sounds, given that the GOP had only 191 seats to start with. Reagan's approval rating fell below 40 percent, and pundits began dismissing him as a one-termer.

It was in this environment that Mondale, who had served as Carter's vice president, decided to run for president in 1984, and polls at the end of '82 showed him leading Reagan by nearly 10 points. Of course, that's not how the race ended up two years later, when Mondale lost 49 states to Reagan. But his experience is worth keeping in mind now, with Republicans confidently predicting an end to the Obama presidency in 2012.

I spoke recently with Mondale, whose memoir, "The Good Fight: A Life in Liberal Politics," was released earlier this month, about the political parallels between '82 and '10, the ways in which the '82 recession was different, and what it was like to run against Reagan at the peak of his popularity.

How did you interpret the 1980 election? Did you assume Reagan's victory represented a short-term phenomenon, or something that would last?

You could feel before the election that there were forces at work that were moving public opinion, creating a different idea about government — more skeptical — and that we were on the losing side of those trends. I think it's a cycle. We were at the end of a long period of vigorous government activity, going back to Lyndon Johnson, and Reagan tapped into this idea that we needed to pause and stop the use of government wherever we could. He was able to create this idea of being calm, of being confident, of being patient, of spelling out answers that didn't involve government. I would say that he rode a trend that lasted for maybe two decades, maybe less, where that was the predominant feeling. And I don't say that I saw that coming, but by the time '84 came around, you could sure feel it.

And Reagan sank impressively in the polls in '82. And in the '82 elections, it was a pretty good year, because people believed that Reaganomics wasn't working. It was only later that they changed their mind about that.

So when you hear all of the verdicts being rendered now about the Obama administration, do you see parallels to Reagan?

Whenever people are miserable, incumbents tend to pay responsibility for it. And in that sense, they are very similar. Reagan slumped terribly when the economy was in bad shape. But people went back to work, and when people perceived that the economy was picking up, Reagan's poll numbers came right back with it. And I think this could be somewhat the same experience this time, although I fear that the economic problems this time are going to be a lot slower in turning around than they were back then.

The recovery that followed [Federal Reserve chairman Paul] Volcker's draconian monetary policies — the economy picked up again about a year and a half later, when inflation had been wrung out of the system. Now the problem is not inflation; it's stimulation. And Congress, I don't think right now, is in the mood for more stimulation. The Federal Reserve Board is going to take some steps here apparently. It may help, but most of the predictions I see say that we're going to be living with this for three or four more years, and it's going to be tough politically for anybody in office.

That's something I've been wondering about. If unemployment is still high in 2012 — over 8 percent, say — can Obama really get reelected under those conditions?

I think so. He's got a good case that this stuff was put in place before he arrived, that most of the deficit is traceable to the collapse of the economy and the other egregious things that went on. And he's turning around the economy, providing leadership. And I think he can say the Congress hasn't been as helpful as the public needs it to be. And even though it's going to be a tough fight, I think he can make an issue of it.

The Democrats seemed to go through some soul-searching, for lack of a better term, after losing in 1980, trying to decide who and what they were as a party. How does what your party experienced then compare with what Republicans are going through now?

It may be that the Republicans will be divided and struggling over who are their next leaders, over what the narrative should be, and over these deep differences between these so-called Tea Party types and the old regulars. It could become a pretty bitter matter, if it isn't already.

I don't know that we had it that bad. But we lost the election, and a lot of people were angry at us for losing. In the argument over what the Democrats should stand for, some people felt that we hadn't been as vigorous in the use of government as we should have been — that if we had been, we would have gotten these problems solved. Others argued that we were going too far, too fast, and had to slow down. Those issues took a while to sort out.

We had, I think, 10 people running for president in 1984. Big names — John Glenn and others — who all had a different take on what Democrats should believe in, what our story was. Gary Hart and I had quite a debate over that. It was a real fight over the soul of the party: What are we for? Where do we stand? How do we work to reunite the party around issues and a philosophy that would be helpful to the country? That took at least four years. We lost again in '88. You might say it took eight years to get it sorted out and then finally come up with Bill Clinton, who was not on the national scene in those early years. It took a long time, not only to develop the leaders but before the public was willing to listen again to a national Democratic leader. That could be the same for the Republicans.

It seems that this year, it doesn't really matter what Republicans say or do — they're going to win a lot of races. But when you look longer term, what do you see emerging on their side?

I don't see anything emerging, because they're doing exactly what you said. They're trying to stay out of the question of what they're for. The few that do talk about it, like Paul Ryan, who wrote a book — they're trying to burn the book. They don't want to get into issues.

After this election, though, they'll have to start telling us what they want to do. They'll have to start putting in bills, voting on it, and that sort of thing. And that's where they'll start dividing, I believe. And the public will start seeing some of this stuff. What do they intend to do about Social Security and Medicare? What are they going to do about this soaring unemployment? American jobs fleeing overseas? Let's hear it. And I think when they get into that and start making choices and we hear their narrative, then the debate will begin within the Republican Party.

I've seen polls that put you ahead of Reagan by 10 points after the '82 midterms. When you started running for '84, did you expect it would be another Democratic year?

I thought I had a chance. But I also knew that what was driving those polls was the economy, and that the economy probably would pick up and it would help Reagan. I must say, I didn't anticipate how much it would help him. I felt confident about my possibilities in '82. I don't think I was overconfident.

If you'd known how strongly the economy would bounce back, would you have sat it out and waited for another year?

No. It was time for me to run or forget about it. It was four years since I'd left the vice presidency. I wanted to run, I had a case I wanted to make against Reagan's policies, and I did what I wanted to. I'm sorry the way it came out, but I feel good about the way I ran the campaign.

Was there a point while you were running that you just realized, "Wow, the economy really is back, and this race is suddenly going to be really tough to win"?

Yeah. I would say by mid-'83, I could see that Reagan was on a roll. But I still thought I had a chance, and at our convention we were back even again with Reagan. And after the first debate with Reagan, I thought I had a chance again, because a new issue was raised, and that's the question of whether he was fully with it. But in the second debate, he did fine, and that was it. I knew we were probably done for.

I've always wondered about that — if at the second debate he'd shown up and had a similar performance, how different the election might have turned out.

After the first debate, we jumped about 8 points and we were up in 10 or 12 states. And there was a lot of concern about Reagan the person. It was nothing I said. I never tried to make this issue. But they could see it on camera. The second debate, he came back and he was confident, and he was direct and positive, and the public liked it, and they were reassured that the first debate was just an off-night for him. And that's what they wanted to know about him. Once they were assured, that's it.

If he'd had a second night like that — if he'd done in the second debate as poorly as in the first debate, it might have opened up a real chance there. But it would have been based on their concerns about him, not where he was taking us. By that time, I knew all of Reagan's speeches and themes. And that first night, he was forgetting his themes. He started down the trip on the West Coast, and he got lost. It was something. One of the reporters told me afterward that I should have just ceded my time to him. But there's no joy in that. But if he'd done that again the second night, I think I'd have had a chance. But he didn't.