Why Barney Frank is in danger of losing 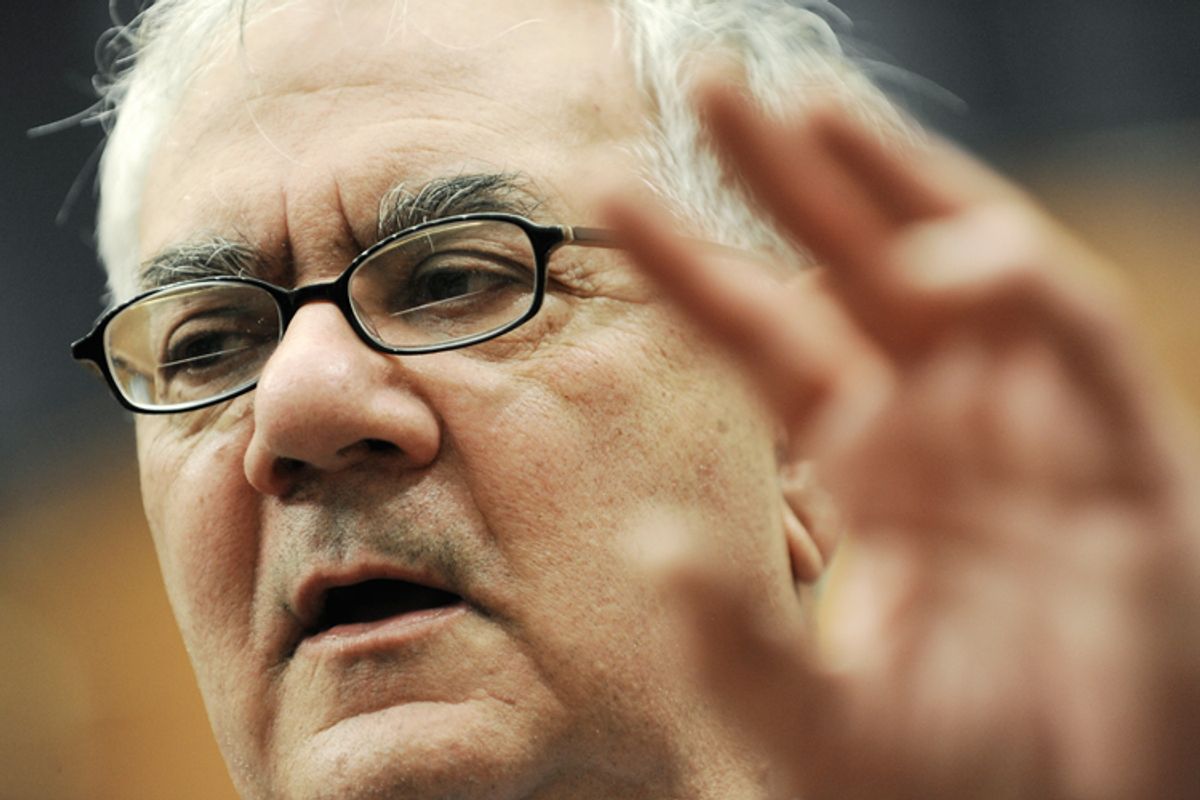 A new Boston Globe poll puts Barney Frank ahead of his GOP challenger, Sean Bielat, by a 46 to 33 percent margin. That may sound like good news for the incumbent, until you consider that Frank, who was first elected in 1980, has never won a general election by fewer than 20 points -- and that he's notched at least 64 percent of the vote in every race since 1990.

It's not hard to see what's going on here. As I wrote back in January, when Scott Brown knocked off Martha Coakley, Massachusetts is a perfect example of how the 2008 election changed voters' perceptions of the two parties almost overnight. For the previous decade and a half, the Bay State's electorate (and the electorates of similar blue states) had shunned the GOP. This was a result of the 1994 Republican revolution, which certified the national GOP -- once a big-tent party full of moderates who could win in culturally liberal states -- as a Southern-based party rooted in cultural conservatism and religious fundamentalism. With that GOP running Congress after '94 (and the White House after 2000), Massachusetts' swing voters revolted against the GOP label. It's not at all a coincidence that the party, which won two House races in the state in '94, hasn't won a single one since then.

But the 2008 election changed this dynamic. For the first time since before '94, Republicans were locked out of power in Washington, and Democrats were in charge. With the economy a wreck, swing voters' priorities shifted. Stopping the GOP was no longer a priority; registering protest with the ruling Democrats was. Thus, Brown was able to knock off Coakley, giving the GOP its first Senate victory in Massachusetts since 1972. And thus, several House seats are suddenly in play this year.

Frank's is one of them. The 4th District he represents is solidly, but not overwhelmingly, Democratic. It includes liberal bastions like Brookline and Newton, but it also takes in enough suburban turf to give the GOP a theoretical chance under the right circumstances. And the right circumstances, more or less, seem to be in place this year. The national climate is, clearly, the biggest single factor; if a Democrat were not now in the White House, Frank would be safe and we wouldn't be talking about this race. Then there's his opponent, Bielat, a 35-year-old Marine reservist whose appeal is somewhat similar to Brown's. And then there's Frank's baggage -- his acerbic wit (which plays like arrogance in a climate like this) and persistent efforts by the right to pin the financial crisis on him; fair or not, the "blame Barney" campaign has penetrated the public's consciousness.

Add this all up and Frank is facing his toughest test since 1982, when redistricting threw the then-freshman congressman into a district drawn to favor Republican Rep. Margaret Heckler. That year, Frank was saved by the national climate -- an ugly recession that had voters eager to send Ronald Reagan and his party a message -- and won by 20 points.

Only one other time since then has he faced a suspenseful reelection, back in 1990, when he faced the voters for the first time since the House reprimanded him for his relationship with a male prostitute. Republicans tried mightily to recruit a strong challenger. Bill O'Reilly, then the host of "Inside Edition" (and a New Jersey resident), flirted with a bid and even met with Ron Kaufman, a top aide in George H.W. Bush's White House. "At this point, I think I'm much more conservative than Barney is," O'Reilly said. "Of course, Gorbachev is more conservative than Barney." O'Reilly ended up passing, though, as did Avi Nelson, a radio talk show host who'd nearly beaten Sen. Ed Brooke in the 1978 GOP primary; Robert Marsh, an up-and-coming state legislator; and Roy Switzler, who had run for governor in 1986. Eventually, the GOP recruited James Nuzzo, a former aide to Bush, but he dropped out before the primary -- leaving the party with John Soto, a gadfly who demanded that Frank take an AIDS test. Frank won in November, 64 to 36 percent. In 1994, when the national climate was as hostile to Democrats as it is this year, Frank dodged a bullet when no Republican filed to run against him.

If Bielat does pull off the upset, he will immediately become one of the most endangered Republican freshmen. The same will be true if Republican candidates win in the other Massachusetts districts where they are competitive this fall. We saw something similar happen after 1994, when Republicans Peter Blute and Peter Torkildsen were both reelected to the House, thanks to the national climate. But with Newt Gingrich and the Republicans suddenly running Congress, Massachusetts voters promptly stopped supporting the GOP in federal races, and Blute and Torkildsen were drummed out -- ushering in the dark era for Massachusetts Republicans that may be ending this year. Temporarily.