Nucky faces trouble in the bedroom, while a violent act threatens to turn Jimmy into a bona fide gangster 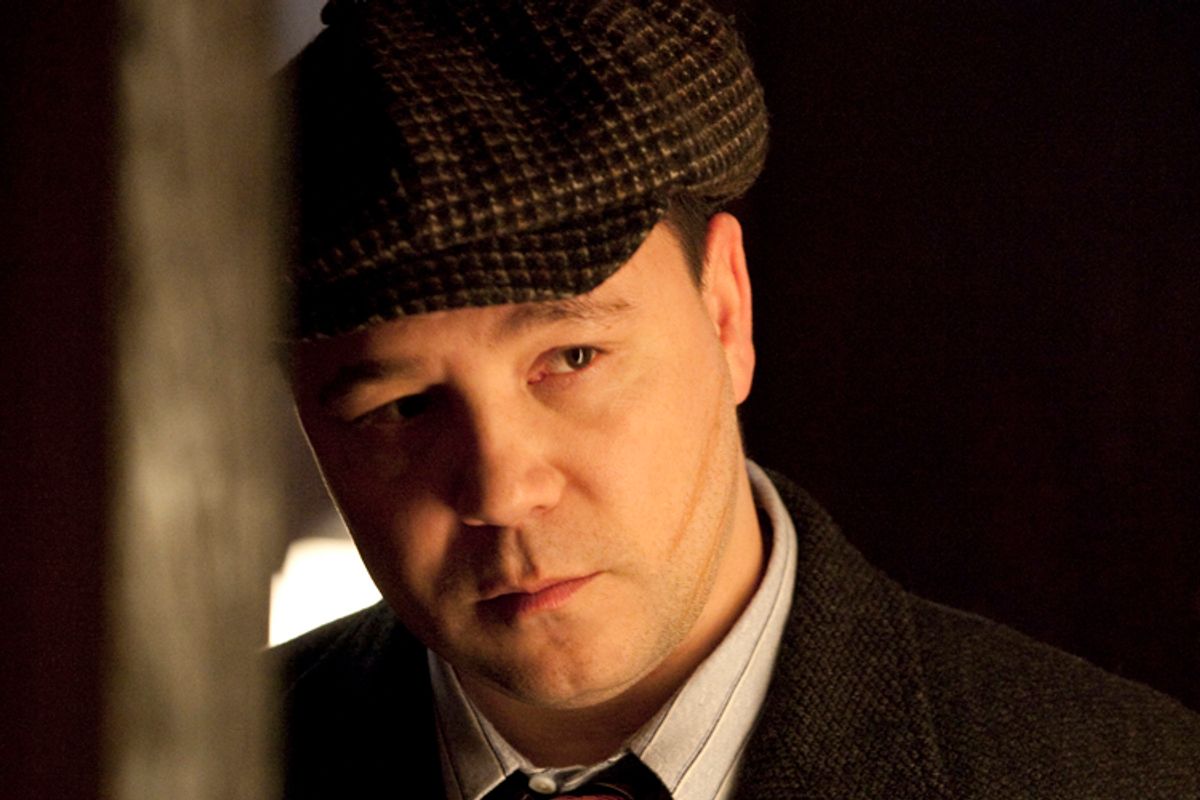 This week on "Boardwalk Empire," everybody gets screwed. At first, it's just metaphorical, as Nucky Thompson's bagman gets ambushed by a heavy from the D'Alessio mob, as arranged two weeks back by the indebted Mickey Doyle. But the first of several boudoir scenes follows immediately after, with Nucky and Lucy basking in a postcoital glow. Or at least she is. Nucky seems distracted, which is not something a woman of Lucy's lovemaking talents is about to let pass unnoticed. She puts on her best bad-girl pout, cooing "I'm your little tiger cub" as she slithers through the sheets, climaxing by raking her nails across Nucky's chest with a sound like the tearing of sailcloth. He, predictably, is not amused.

Where are Nucky's thoughts straying? The answer arrives posthaste, as Margaret Schroeder drops in on head Dry Mrs. McGarry (Dana Ivey) for some matronly advice. (Perhaps it's a long shot, but I wonder if there's a chance the anti-drinking crusader might be named in tribute to cartoonist Eddie Campbell's fabulous drunkard Alec McGarry.) A man, Margaret tells her, has made her an offer. "Of what nature?" the older woman asks. "Domestic? Financial? Sexual?" Yes, as it happens, to all three.

Mrs. McGarry's first response is predictable moralistic: "There are various words for that sort of woman. None of them are flattering." But she softens her stance through anecdote, relating how she moved from the mansion built by her late husband to a more modest abode, using the proceeds to devote herself to "matters I consider important." With the success of the temperance movement and women's suffrage only one state away from ratification, the time calls for women to provide for their own freedom, anyway they can. Being a kept woman is no one's goal -- except maybe Lucy's -- but as a penniless, widowed mother of two, Margaret is hardly flush with options. "I've no mansion to sell, ma'am," she says, with a hint of irony. "Which is why you must do as you see fit," Mrs. McGarry replies. "You owe no one else an explanation." She may be a zealot when it comes to booze, but as a single woman of advanced age, Mrs. McGarry is enough of a realist to hand Margaret a parting gift: a copy of Margaret Sanger's "Family Limitation," the contraception pamphlet that gives the episode its title.

One hopes that Gillian and Lucky Luciano are using some kind of protection, since to use Lucky's words, the lead has been fully restored to his pencil. Off the Sanger pamphlet, we smash-cut to Lucky hard at work on Gillian's lower half, taking her from behind in a manner that recalls Lucy's animal advances towards Nucky. Meanwhile, Nucky's bagman describes the "dago look" of the man who ambushed him, which causes Nucky's suspicions to fall Lucky's way.

Although there's no central story this week, "Family Limitation" is held together by visual and thematic rhymes. Margaret and Mrs. McGarry's tête-à-tête is mirrored by another, less cordial chat between women of different generations when Lucy stops by the dress store. Lucy goes into her usual routine, forcing Margaret to strip naked in order to try on some barely-there piece of lingerie, cruelly commenting that the older woman's body has never recovered from her dual pregnancies. Margaret responds by way of analogy, an extra dash of Celtic lilt creeping into her voice as she tells the story of a "raggedy man" whose trained rooster would peck out "The Mountains of Mourne" on a toy piano. The first year, she says, it was a fantastic novelty, but by the third it had grown tired, because "'The Mountains of Mourne' was all that little rooster could ever do.'" Lucy, not surprisingly, doesn't get it, so Margaret puts it as plainly, and crudely, as she can: "Maybe your cunny isn't quite the draw you think it is." And with that, she storms out, not even breaking her stride as she announces, "I quit."

Unfortunately for Margaret, this is also an episode where characters' illusions are stripped away from them: Lucky learns, courtesy of Arnold Rothstein, that the "Mrs. Darmody" he's been sleeping with is Jimmy's mother and not his wife, and Jimmy makes plain that he has seen through Al Capone's vague falsehoods about serving in World War I. (His got his facial scars after making lewd remarks to the sister of a drunken gangster.) Margaret is so busy reveling in her new digs she neglects to pick up on stray remarks about "the other girls" in the building. It's only when a neighboring floozy asks if she can leave her child with Margaret's for the night that she realizes she's been installed in a glorified harem, just one among numberless mistresses.

Jimmy's illusions died last week when his girlfriend, Pearl, shot herself after being disfigured by one of Sheridan's thugs. Pearl was a dreamer, as he's reminded when another girl in her whorehouse returns his copy of Upton Sinclair's "Free Air," which encapsulated her hopes of making it to California someday. She ended up drinking fresh-squeezed oranges laced with laudanum, and he learned that you can't be a gangster unless you're willing to back up your words with violence. This week, he and Al invite Sheridan for a sit-down, and after they check their coats and guns, they make peace, accepting a few blocks of Sheridan's territory rather than taking it over wholesale. Jimmy almost blows the deal by fingering a wicked-looking knife stuck into his boot, but the waters are calmed and drinks are poured. But on the way out, Jimmy and Al pick up firearms along with their fedoras, provided by a cooperative cloak-room girl, and they open fire, slaughtering Sheridan's men in a matter of seconds. Sheridan himself is still gasping, just long enough for Jimmy to inform him, "I think you'd agree that Greektown belongs to us now" before splattering his brains on the wall.

Jimmy's badass quip doesn't fit the reluctant killer we saw in "Boardwalk Empire's" first episode, or the strategist who counseled Al not to threaten Sheridan directly. But Pearl's death has hardened him, fusing Nucky's cunning and Al's brutality into a formidable criminal mind. We're witnessing the birth of a bona fide gangster.

Two more illusions yet to be lost. Frank, the mayor of Jersey City, informs Nucky that his ostensible ally, Senator Edge, is a silent partner in a paving company, which makes the promised highway contracts unlikely to arrive. Politicians, Frank informs Nucky, come and go, but bosses are forever.

Creepy Agent Van Alden has made Margaret his emblem of female purity, but he learns that she's moved out and in with another man, and her immigration records inform him that she was pregnant when left Ireland at the age of 16, miscarrying en route. Predictably, though, that just turns him on more. He sets her childhood photo on his bed and removes his shirt to reveal a back knotted with scars, to which he adds a few fresh wounds with a knotted belt. The overzealous crusader who's secretly a twisted pervert is a lazy cliché, and it's unfortunate that while other characters have broadened in the course of the first six episodes, Van Alden has only deepened, with fresh psychoses revealed each passing week. Nobody plays crazy like Michael Shannon, and the mixture of pain and ecstasy with which he greets each fresh lash is enough to make you flinch. But how much farther can they take him in one direction before he loses it completely?