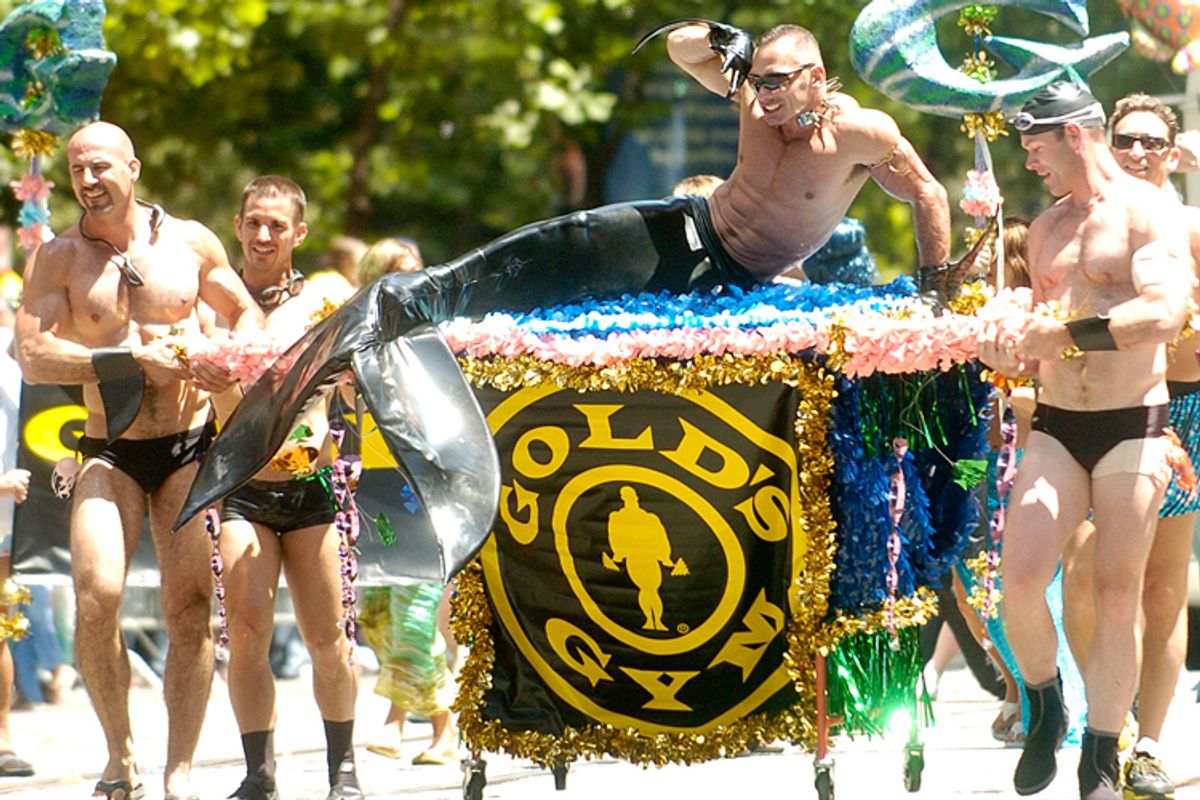 Several leading gay blogs and newspapers are pushing a petition to demand answers from Gold's Gym about large donations by its owner to American Crossroads, the Karl Rove-linked outfit that is spending millions to elect GOP candidates who are decidedly unfriendly to gay rights.

The new effort, in the form of an online petition that has gained about 2,000 signatures, is reminiscent of a successful push against Target Corp. after the company gave $150,000 to a conservative Minnesota group that campaigned for a candidate who opposes same-sex marriage. After the outcry, the CEO of Target ultimately said he was "genuinely sorry" for the move.*

The situation with Gold's, which, the petition notes, "markets and caters to LGBT customers," is somewhat different. The gym chain is owned by Dallas-based TRT Holdings, the company of billionaire Robert Rowling. A longtime conservative donor, he has given $2 million this election cycle to American Crossroads.

Here's what the petitioners say:

Unfortunately, the candidates that Rowling's money is being used to elect are some of the most vehemently anti-gay politicians in the country. These candidates include Nevada politician Sharron Angle, who once said she would ban gays and lesbians from adopting children and that homosexuality would lead to the downfall of the United States, and Roy Blunt, who would like to see the U.S. Constitution rewritten to include a ban on same-sex marriage.

It troubles me deeply that the CEO of TRT Holdings, which owns Gold's Gym, would give money to help elect these anti-gay candidates. It's especially troubling given that I always believed Gold's Gym to be a welcoming place for all people, regardless of their sexual orientation.

I'd like an official response from Gold's Gym about the anti-gay political donations of one of its senior executives. This type of corporate activity is unacceptable, and it's a huge disservice to your LGBT customers. They deserve to know the truth about the political priorities of the leaders of both TRT Holdings and Gold's Gym.

This sort of backlash is precisely the reason that corporations and wealthy individuals find it attractive to back outside groups that, exploiting a section of the tax code, grant them anonymity. American Crossroads' partner group, American Crossroads GPS, offers donors exactly that; it has been on a wildly successful fundraising streak.

It'll be interesting to see how much more steam this Gold's petition picks up -- it has already been featured in several gay newspapers and blogs. We've reached out to both Gold's and American Crossroads on this, and we'll update this post if we hear back.

*UPDATE: Commenter BrianNelson makes the valid point that the Target CEO's apology was less than full-throated. The full quote: "I realize our decision affected many of you in a way I did not anticipate, and for that I am genuinely sorry."