Inside the lucrative "anti-jihad" industry 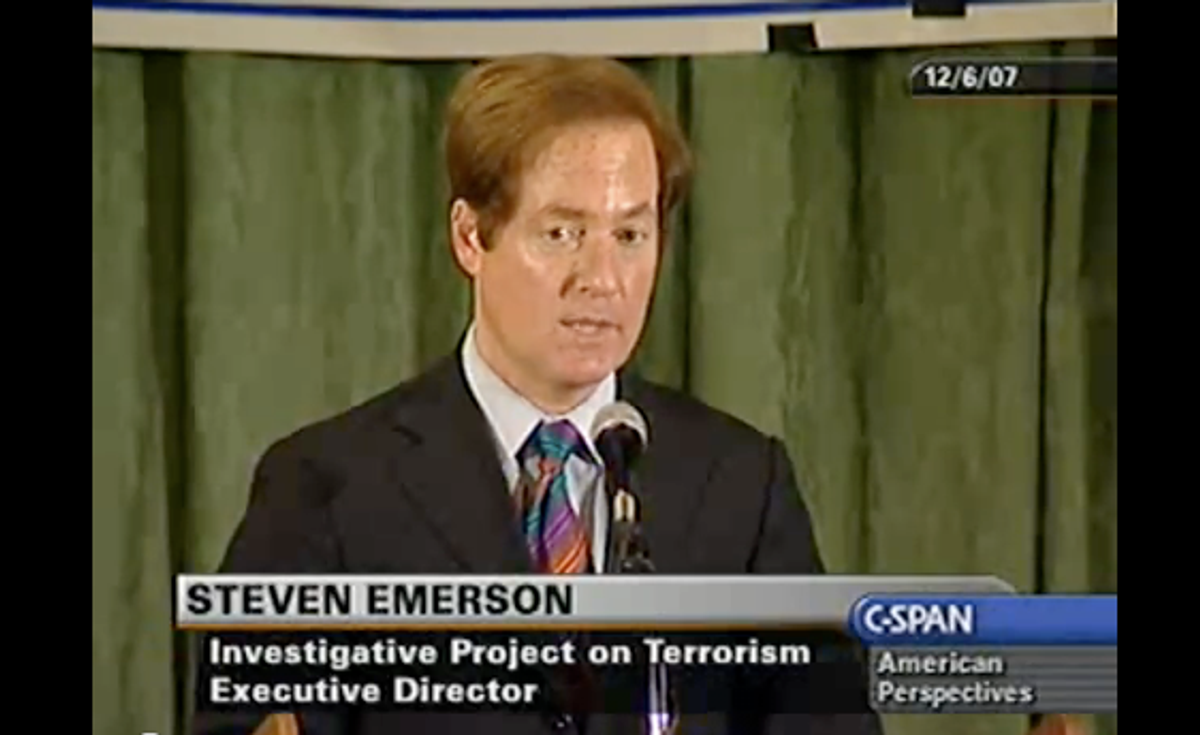 One of the under-examined aspects of the recent bloom in anti-Muslim sentiment is the role of professional "anti-jihad" activists. These are people like the blogger Pamela Geller, the author Robert Spencer, the investigator Steven Emerson, and the think tank denizen Frank Gaffney. They have made careers out of writing reports on sharia law, testifying against the construction of mosques around the country, and appearing on cable to talk up the threat from Muslims.

The Tennessean newspaper, which has been covering fierce opposition to construction of a mosque in the Nashville suburb of Murfreesboro, published an investigation of the "anti-jihad" industry on Sunday. Among its most notable findings: Emerson, the executive director of the Investigative Project on Terrorism, appears to be operating a pair of organizations under a highly unusual -- and, experts told the newspaper, dubious -- tax setup.

The thumbnail version: Emerson collected over $3 million in 2008 for his tax-exempt non-profit, the Investigative Project on Terrorism. The Investigative Project then paid all of that money to another entity controlled by Emerson, the for-profit SAE Productions (the two entities also share a Washington, D.C., address). The result: it's impossible to see how the money is being used by Emerson, including how much he is paying himself and others. A spokesman for the groups maintains that this setup was created for security reasons so names of employees are not publicly released.

In the the Investigative Project's tax return, which ordinarily lists compensation information and details spending, we simply see that virtually all of the money it spent in 2008, $3.39 million, went to SAE Productions. Ray Locker, a spokesman for the groups, says that $1.02 million of that total sum was for salaries and $2.37 million was for program expenses. But how much are Emerson and other SAE officials being paid in salary and benefits? There's no way to know because SAE is a private entity that it is not required to release such information.

Even though the stated reason for this unusual arrangement is security -- rather than, say, hiding how much money Emerson makes -- Locker told Salon that SAE would not release salary information.

As the Tennessean reports, there is also some question about whether Emerson has lived up to his pledge in 2006 correspondence with the IRS that the Investigative Project would subcontract with another non-profit (when SAE is in fact a for-profit). Experts who spoke to the paper questioned the propriety of the setup:

"Basically, you have a nonprofit acting as a front organization, and all that money going to a for-profit," said Ken Berger, president of Charity Navigator, a nonprofit watchdog group. "It's wrong. This is off the charts."

Responding to the Tennessean article, Locker told Salon in an email:

[A]ll of our tax filings and corporate structures regarding the [Investigative Project on Terrorism] foundation and its contractors were vetted by our outside legal experts and accountants.

The foundation contracted with a private company to provide a layer of security for our employees. By using an outside contractor, whether it’s a not-for-profit or for-profit entity, we don’t have to name our employees, which gives them more security.

All of these arrangements were approved by our attorneys and the IRS, which also reviews all of the tax returns by SAE Productions.