"Dancing With the Stars": Kurt Warner lumbers on

During "Rock Week," Audrina Patridge remains an emotionless wonder as Jennifer Grey starts to spin out of control 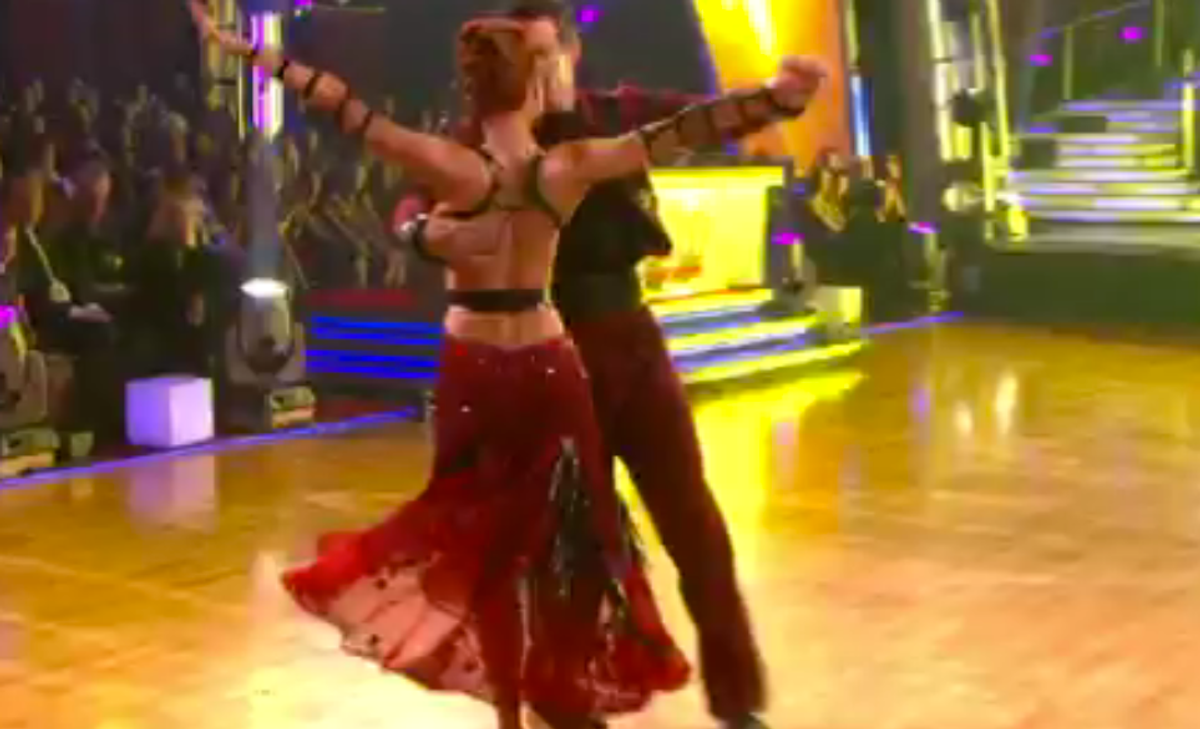 Kurt Warner performs on last night's "Dancing With the Stars"
--

Marketers have known for years that sex sells when it comes to cars, clothes, cosmetics and Disney stars -- but we learned last week that the same adage doesn't extend to 70-something, nostalgic TV moms. Florence did her best to seduce us, having decided early on that she didn't want to rely on the "she's so inspirational" vote to pull her through. And she was right. At some point, viewers need more than a living reminder of simpler days to cast a ballot, but she and Corky may have overplayed their hands when the "more" evoked images of softcore granny porn.

I'm not going to say that America rejected Florence because of that unfortunate "finger-lick/cougar scowl/breast fondle" move, but when Bristol Palin wanders around a dance floor aimlessly in a monkey suit and still gets more viewer votes, we have to assume something didn't quite click.

Tonight, the remaining seven couples performed two dances for "Rock Week" -- including a marathon session where couples were picked off one by one -- worst to best -- and rewarded accordingly.

Tony thinks Audrina may be "thinking" too much. I don't believe that's the problem -- unless thinking at all might qualify as too much in her case. So, Tony took her to a mixed martial arts gym to see if a little aggressiveness could jumpstart a primal emotion or two. No such luck -- she just smiled cluelessly in a new setting while pretending to be angry at a Bruno-faced punching bag.

Before we even got to tonight's performances, they replayed the Top Ten dances from previous seasons as voted by the viewers, which included several paso dobles. Audrina's paso doble wasn't close to being in the same league. Like most everyone else who performed tonight she looked as if she was dancing it underwater -- no passion, spontaneity or energy.

Len and Bruno once again pointed out her lack of character. Carrie Ann mentioned that she was improving in her body movement, but that was it. And once again, each of them inexplicably tried to talk her into becoming somebody other than who she actually is.

Lacey abandoned her happy-go-lucky starlet routine to try to whip Kyle into shape for a sexy tango. Kyle still doesn't quite get the distinction between the lip-biting, "neighbor Larry" from "Three's Company" brand of sexy and the real thing, but he has a few more chest hairs to grow before that becomes a concern.

Somewhere in the middle of their tango, he and Lacey seemed to get lost and everything seemed to stop until Lacey grabbed his hand, pointed him in the right direction and kept going. Even though Len seems to have a bee in his bonnet about Kyle, giving him once again the lowest score of the three judges, Kyle's "middle of the pack" status may serve him well as the presumptive leaders crack under the pressure.

The bloom came off the Jennifer and Derek rose last week, and this week a strong wind came through and blew a few of the petals off. These two are tanking fast -- perhaps a consequence of their equally intense personalities. Unlike most of the other contestants, Jennifer has no problem with accessing emotion on the dance floor -- her problem seems to be taking that emotion and containing it enough to not spin completely out of control.

The dance still looked better than most, but they are the unfortunate victims of elevated expectations. Jennifer seems to be a little bit over it at this point -- and unless she can find the focus to go with the fire she's not as sure a thing as once thought.

"If Rick analyzes every step and movement," Cheryl says, "he's never going to access that emotion and passion that the judges keep asking for." During the rehearsal, he wanted to break the dance down to the incremental joint movements, hoping that he could somehow diagnose what he was doing wrong. "That's not what I want," Cheryl kept saying, "that's not it at all."

Like most everyone else, the two of them were fine but looked like they were performing in slow motion. I can't remember if that's the norm at this point -- perhaps once we get down to the last weeks everything will start to come together as the contestants' dance instincts take over and the learning curve evens out. I can only hope so. Right now, I feel like I'm at a wedding where the happy couple doesn't seem to know when it's time to break for cake.

"I think I messed up last week because I never went full out in rehearsal," Bristol explained to Mark during the practice segment. As lazy and insulting as that is, it's proven to be an effective strategy as the Type As in the group fall victim to their own exuberance. Who but a Palin could have figured out that aspiring to mediocrity could be so effective?

Bristol came a little bit alive this week in her tango -- almost as if her inexplicable absence from last week's bottom three has left her feeling a bit invincible. And why wouldn't she? Apparently there are a host of pistol-packin' Palin fans out there -- inspired by lower taxes, lack of government interference and wholesome listlessness.

Bret Michaels made a special appearance during the rehearsal segment to teach Kurt how to be more "Rock and Roll" -- which, according to Bret, is all about "attitude" and artfully dumping your one-night-stand on the side of the road. Apparently this didn't help Kurt's performance.

Once again, Kurt lumbered half a step after Anna during the entire routine, perhaps thinking his serious paso doble face could distract the judges. "You looked awkward doing it; I felt awkward watching it," says Len. The other two agreed, giving him the lowest scores of the night.

Brandy and Maks have developed into a solid duo, even though they have yet to light the dance floor on fire with the same kind of break-out performance that Jennifer and Derek had a few weeks ago. Their consistency may not be the most crowd-pleasing path to victory, but it may end up being the most effective.

Their tango secured the highest scores of the night -- which on an evening of lackluster performances seemed to be all that was necessary. Unless something dramatic happens soon, Season 11 may go down as one of the worst ever. And I may be forced into a pill addiction just to stomach writing about it.