Yes, Virginia, there is some good news for Democrats

It's not much, but it has been a pretty good October for the party in two big races 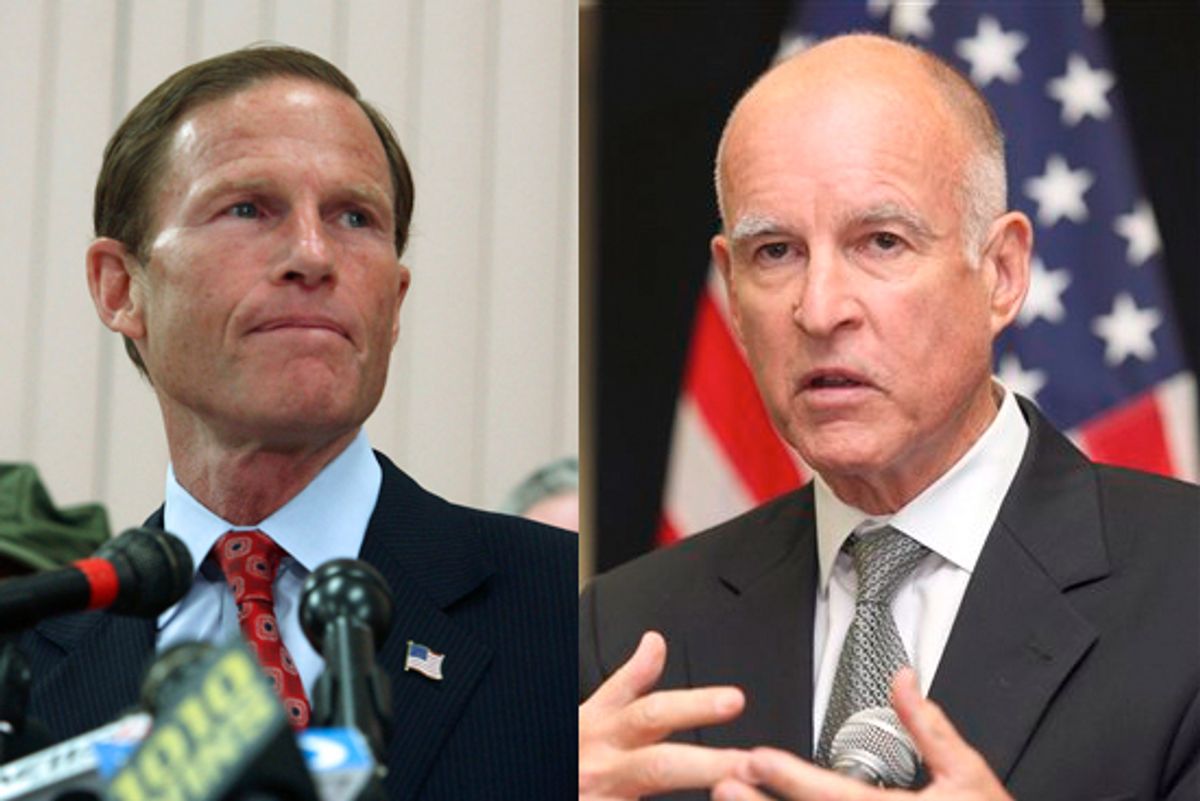 Don't get me wrong: It's still looking like next Tuesday will be grim for Democrats, who stand to lose the House, a bunch of governorships and state legislatures and maybe even the Senate. Still, it's worth pointing out that the party has received a little good news in the last few weeks, with two big races that it once seemed poised to lose swinging back in its direction.

One is California's gubernatorial contest, where Jerry Brown has pulled ahead of Meg Whitman, whose campaign has apparently suffered from revelations that she employed an undocumented worker as a nanny. Whitman, who has waged the most expensive self-funded effort in history, had edged ahead of Brown last month, and it was beginning to look like this year's anti-Democratic climate would power her across the finish line. But her own image with voters, shaky to start with, has taken a hit in recent weeks; a new poll gives her an upside-down favorable rating of 37-52 percent -- and shows Brown pulling ahead by 13 points. Another new survey, from the Republican-friendly Rasmussen Reports, puts Brown up by 6.

The other is in Connecticut's Senate race, where another free-spending Republican, Linda McMahon, had climbed within the margin of error several weeks ago against Richard Blumenthal. Connecticut, like California, is a deeply blue state where swing voters spent the last decade and a half habitually voting against Republicans; but the nature of 2010 -- a midterm election with a Democratic president and Democratic Congress presiding over near-double-digit joblessness -- has made those voters unusually receptive to the GOP. With her personal fortune (and aided by embarrassing reports earlier this year that Blumenthal had been far too cute in describing his Vietnam-era military service), McMahon tapped into the mood and raised hopes of an unlikely GOP pickup. But her momentum seems to have crested several weeks ago; a new poll from Quinnipiac University now puts Blumenthal comfortably ahead, by 12 points. McMahon's WWE baggage may just be too much for Connecticut voters.

Together, these two races hardly represent a trend; there's no evidence of a broad, nationwide shift back to the Democrats. But the developments in Connecticut and California do demonstrate the way in which campaigns matter. I've written a lot about the degree to which structural factors -- chiefly, the economy -- dictate election results. But there is a point at which the liabilities of individual candidates will make voters uneasy; with both Whitman and McMahon, it seems, their liabilities are severe enough to give cold feet to swing  voters who might otherwise be inclined to side with the GOP this year. On a more extreme scale, this is the same phenomenon we've seen in Delaware, where the nomination of Christine O'Donnell has cost Republicans a Senate seat they were poised to win easily. And it's something that, to varying degrees, we're seeing in Colorado, Nevada, Alaska and Kentucky. (In these races, though, Republican candidates may still win anyway -- just not by the margin that a generic, inoffensive GOP candidate would in this climate.)

So, no, there's really no reason to think a Democratic comeback is afoot. But California's governorship is (obviously) an important office, and the Connecticut Senate race is significant in the fight for control of the chamber -- and in both, Democrats seem to have staved off defeat.