Where are the peasants with pitchforks? 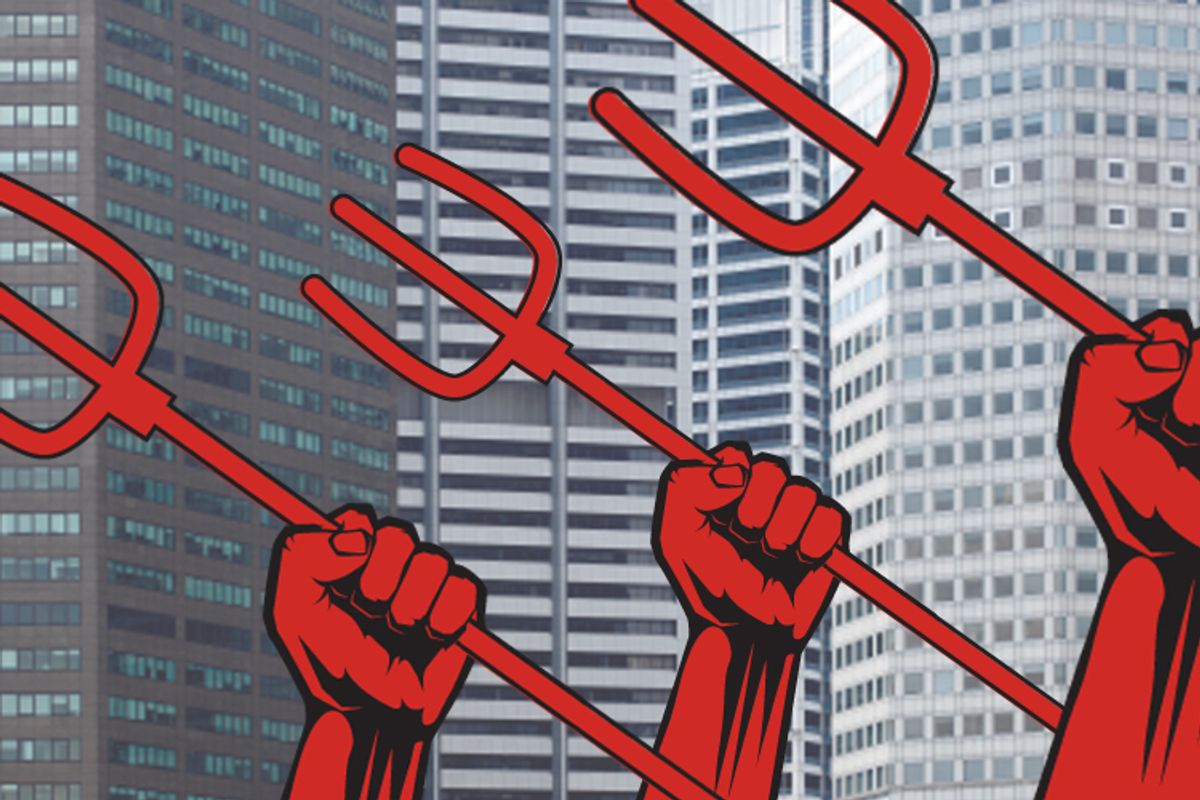 In the aftermath of a global economic collapse brought about in part by the corruption of big government by big finance, many pundits expected a voter backlash in America to take the form of a combination of populist anti-elitism and statist anti-capitalism. But that has not happened, nor is it likely to occur. In the United States, the populists are anti-statist and the statists are anti-populist.

The last realignment of the American party system took place in the 1970s, when the civil rights revolution along with the cultural revolutions of the 1960s blew apart the New Deal order that had coalesced in the 1930s. In the post-New Deal system that exists to this day, the Republican Party is a neo-Jacksonian coalition whose base consists of Southern white Protestants and, to a lesser degree, conservative white Catholic "ethnics" in the Northern suburbs. The Democratic Party is based in big cities and college towns. Among ethnic and racial groups, its most consistent electoral supporters are blacks and Jews, followed by Latinos.

The different ethno-regional bases of the two parties explain their different attitudes toward populism and statism. The Republican Party’s combination of hostility to the federal government with the rhetoric of populism is a revival of the Jacksonian synthesis of the 1820s and 1830s. From the perspective of Jacksonian Democrats or neo-Jacksonian Republicans, anti-statist populism is a rational strategy.

The Jacksonian Democrats of the 19th century, like the neo-Jacksonian Republicans of the 21st century, have believed, not without reason, that wealthy, educated Northeastern elites will always dominate a powerful federal government and sacrifice the interests of the Northern white working class and white Southerners and Westerners. This fear on the part of Jacksonians, past and present, produces a combination of folksy populism with support for state and local governments, which are less likely to be captured by metropolitan elites who look down on Irish and Italian Catholics in the North and the Scots-Irish in the South.

The strategy of today’s Democratic base is equally rational, given its core constituencies. The post-'60s coalition of minorities that forms the Democratic base naturally favors a strong federal government to protect the civil rights of its members from the bigotry of local racial and religious majorities.

But the same logic that leads the Democratic base to favor a strong central government leads it to oppose the kind of nationalism and populism that, in other democracies, as well as in the United States of Abraham Lincoln and Franklin Roosevelt, have been invoked to justify strong, activist national government. Jews, blacks and Latinos, as well as other pro-Democratic minorities like gays and lesbians and secularists, fear that the populism of the white Christian majority, if unleashed, would quickly become xenophobic, intolerant and oppressive. Even an inclusive, non-racist, liberal "melting pot" nationalism is viewed as a threat by those members of minority groups who don’t want their groups to melt away because of intermarriage or assimilation.

This strategic logic explains the apparent paradox that many of the same progressives who call continually for strengthening the central government of the American nation-state also denounce populism and nationalism in America. The interests of the Democratic voter base, rather than philosophical consistency, explain why the same Democrats who favor universal, national social insurance policies also support non-universal civil rights policies like affirmative action and minority redistricting.

Ever since the present party system took shape three decades ago, there have been ephemeral movements that do not fit into the modern Republican pattern of anti-statist populism and the modern Democratic pattern of anti-populist statism. In different ways, Ross Perot and Lou Dobbs represented a third alternative -- the combination of populism with a more statist approach to economics. The reward of these mavericks was to be denounced by Republicans for being too statist and to be viewed with suspicion by Democrats because of their populism.

The reactions of both parties to the Great Recession can be explained in part by the strategic calculations of their respective ethnic and regional constituencies. Consider the debate over infrastructure. Progressive Keynesians are quite right that massive public spending is necessary to compensate for reduced private consumption -- and that investment in infrastructure would be among the best uses of otherwise idle funds. Most progressive Democrats insist on inter-city high-speed rail as the centerpiece of their infrastructure plans, even though costly, highly subsidized passenger rail would be at the bottom of any rational list of transportation priorities, compared to repairing and expanding the nation’s highways, bridges, freight rail network and inland waterways and modernizing the electric grid.

The chief beneficiaries of high-speed rail would be urban real estate interests, big city governments and the elite members of the disproportionately urban Democratic base who could afford the expensive tickets. There would be little or no benefit to the white working class in Northern suburbs or sprawling Sun Belt cities. It is small wonder, therefore, that today’s neo-Jacksonians reject high-speed rail as vehemently as the original Jacksonians rejected ambitious federal programs of "internal improvements" in the 1830s. Nor is it coincidence that Republicans prefer the present system of highway funding, dominated by members of Congress from small-population states in the hinterland, and tend to oppose the idea of an infrastructure bank that might be staffed by members of the Atlantic seaboard elite.

Then there is the debate over healthcare. Because their base includes the black and Latino working poor, who are disproportionately likely to be uninsured, the Democrats naturally made universal coverage the basis of their approach to healthcare, rather than cost containment, which was a secondary consideration. However, most members of the white working class and middle class have coverage through their employers. Their main concern is with the rising costs of drugs, hospital stays and doctors' visits. It was therefore relatively easy for conservative Republican strategists to portray Democratic healthcare reform as a plot to raise taxes and cut healthcare spending for white working-class and middle-class Americans in order to subsidize poor black and brown outsiders, including illegal immigrants.

In this year’s midterm elections, Democrats who favor greater federal government activism but are wary of invoking what they view as a potentially dangerous and xenophobic populism are going to lose congressional seats and possibly one or both houses of Congress to Republicans who, in true Jacksonian fashion, combine unapologetic populism with hostility to a federal government that they view as being dominated by racial, regional and religious outsiders. At some point the present party system will give way to another pattern. But in the near future, conservatives who celebrate the people and oppose the central state will be found in one party, and progressives who favor the federal government but fear the dark side of populism will be found in the other.