"Our Kind of Traitor": Has John le Carr

The latest book by the "The Perfect Spy" author is exquisitely written -- but is the espionage writer out of ideas? 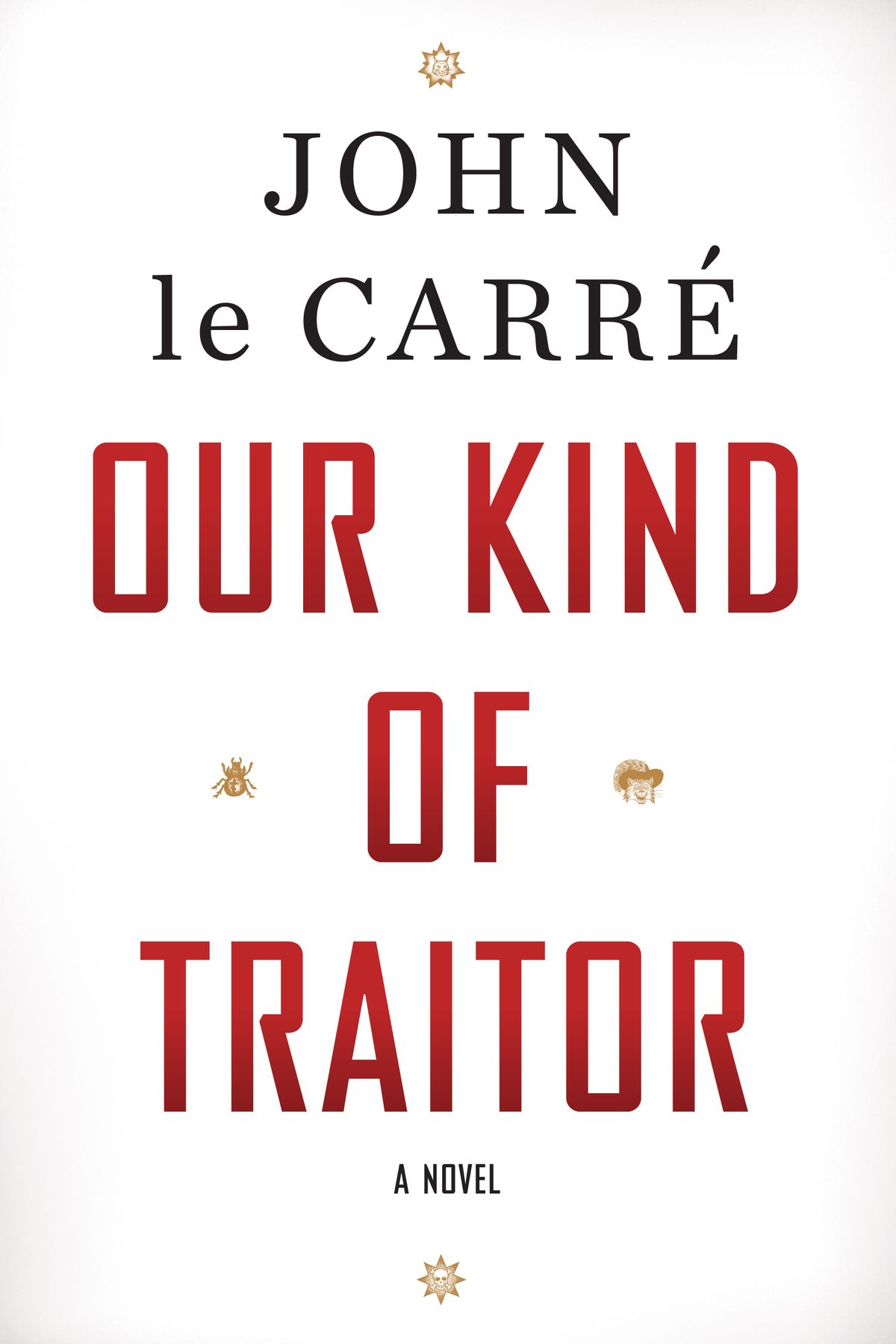 It's hard enough when presidents younger than you get elected. Imagine the day in almost every popular writer's career when he starts writing heroes younger than he is. That day came long ago for John le Carré, who used to write about older men, like his famous spymaster George Smiley. Now, turning 79, le Carré creates mostly more youthful protagonists, like the brilliant, idealistic, naive amateur spy Perry Makepiece in his 22nd novel, "Our Kind of Traitor."

Perry -- and he's always, fondly, Perry, more like a son than a hero -- is likable enough, but there's something unformed about him. We don't want to suspect commercial motives in a writer as strong as le Carré, any more than we care to suspect lechery in a friend's May-December affair. But there's something less than seemly when a writer of le Carré's pedigree and maturity keeps writing main characters playable by movie stars instead of character actors. It's as if the author of "The Perfect Spy," after a career spent making literature out of espionage, has decided he wants to be Ian Fleming after all.

To be fair, no one would ever mistake "Our Kind of Traitor" for "Thunderball." It's too well-written for that, and too structurally tricky besides. Like his beloved touchstone Joseph Conrad, le Carré tells his story here through nested narrative filters. Roughly the first third of the book recounts how a lapsed academic like Perry came to be brokering the defection of a billionaire Russian money launderer named Dima to Great Britain. At first we find them in Antigua, as a friendly tennis match with the comically boorish Russian evolves into the makings of an international incident. Gradually we learn that we're getting the story secondhand, recapped alternately by Perry and his plucky girlfriend, Gail, to their MI5 debriefers. At first this is complicated verging on baroque, but le Carré has the nuances of their interrogators' separate voices down perfectly, and it's all tidy enough in retrospect.

The middle third of the book focuses on Perry and Gail's indoctrination into the ways of the British Secret Service. They learn the finer points of tradecraft from experts who can only dream of the access that our heroes have blithely lucked into. A defection in Paris is planned, and we learn more about the destabilizingly massive amounts of money that Russian oligarchs have been shunting around the planet lately.

Shining a spotlight at corners of the world we ignore to our cost is where le Carré usually excels, but Russian billionaires aren't exactly untrodden ground in recent fiction. (Martin Cruz Smith, in particular, has been doing a sturdy job of translating thorough research into palatable thrillers.) Even if a certain freshness of subject is lacking here, le Carré can still write circles around most novelists, spy or otherwise. The climax partakes of the author's signature nonchalant authority about espionage, with excruciatingly tense vigils punctuated by absurdly brief, confident action. It all invites credulity, though by now whatever we do or don't find believable in such an esoteric profession owes a lot to previous work in the genre, the best of it le Carré's own. If it's hard for him to sound a false note, it may be because he tuned the piano himself years ago.

Repeating himself is harder for le Carré to avoid. We've met and loved his overmatched naifs before, and seen many of them introduced, as here, playing at some innocuous pastime: riding a wonky bicycle in "The Spy Who Came in From the Cold," docenting antically for bored tourists in "Absolute Friends," doing a birthday-party magic act in "Single & Single," and now playing boyishly energetic tennis in "Our Kind of Traitor." A le Carré hero exists to be comeupped by the world for his innocence.

Dima, too, for all the blood on his hands and the rubles in his Swiss bank accounts, cherishes some endearingly childlike illusions about the superiority of a British public-school education. Alas, like the infighting spymasters back in London, he registers more strongly than le Carré's hero. Perry's nice enough, but as readers we'd much rather hear Dima stipulating about his daughter, "My Natasha go to Eton School, OK? Tell this to your spies. Or no deal." Over Perry's demurral he adds, "I pay good. I give swimming pool. No problem."

No problem is right, either with le Carré's assured dialect comedy or his usual fine, understated internal monologues, tightly clipped as a military mustache. A veteran novelist's wee impatience with the mundane bricklaying of fiction is detectable in a paragraph that reads, in its entirety, "Business with the bottle and water jug" -- but let it stand.

The problem, what there is of it, lies with a focus so ripped from the headlines that the author concludes with an actual 2009 story reprinted from the Observer. Time was, we looked to le Carré for next year's news, not last year's. Over the last few books, sadly, le Carré's grown more reactive. As a result, many of his fans have gone from rabidly anticipating his next effort to more respectfully marveling at his undiminished productivity.

It's a measure of how much longtime readers owe the man that we keep returning to le Carré's work expecting revelations instead of his usual simple, undervalued proficiency. For him to astonish us again, as he once did with "The Spy Who Came in From the Cold" or "Tinker, Tailor, Soldier, Spy," he may need a fresh story more worthy of his gifts, his energy and his doughty outraged liberalism. Is it too greedy to hope that this precise anatomist of the world's most ruthless bureaucracies might yet turn his twilight powers to the great slow crisis of our time -- the one that, by its very incremental pace, has so far bested all attempts to turn it into bracingly cautionary fiction? In other words, wouldn't it be just too perfect if the arch-poet of the Cold War could yet perform the service of writing us the great unwritten novel of global warming?

Former book editor/critic of the San Francisco Chronicle and director of literature at the National Endowment for the Arts, David Kipen recently opened Libros Schmibros, a lending library/used bookshop for the once majority-Jewish, now majority-Latino Los Angeles neighborhood of Boyle Heights.