Why would anyone possibly think I've got a problem with the Civil Rights Act of 1964? 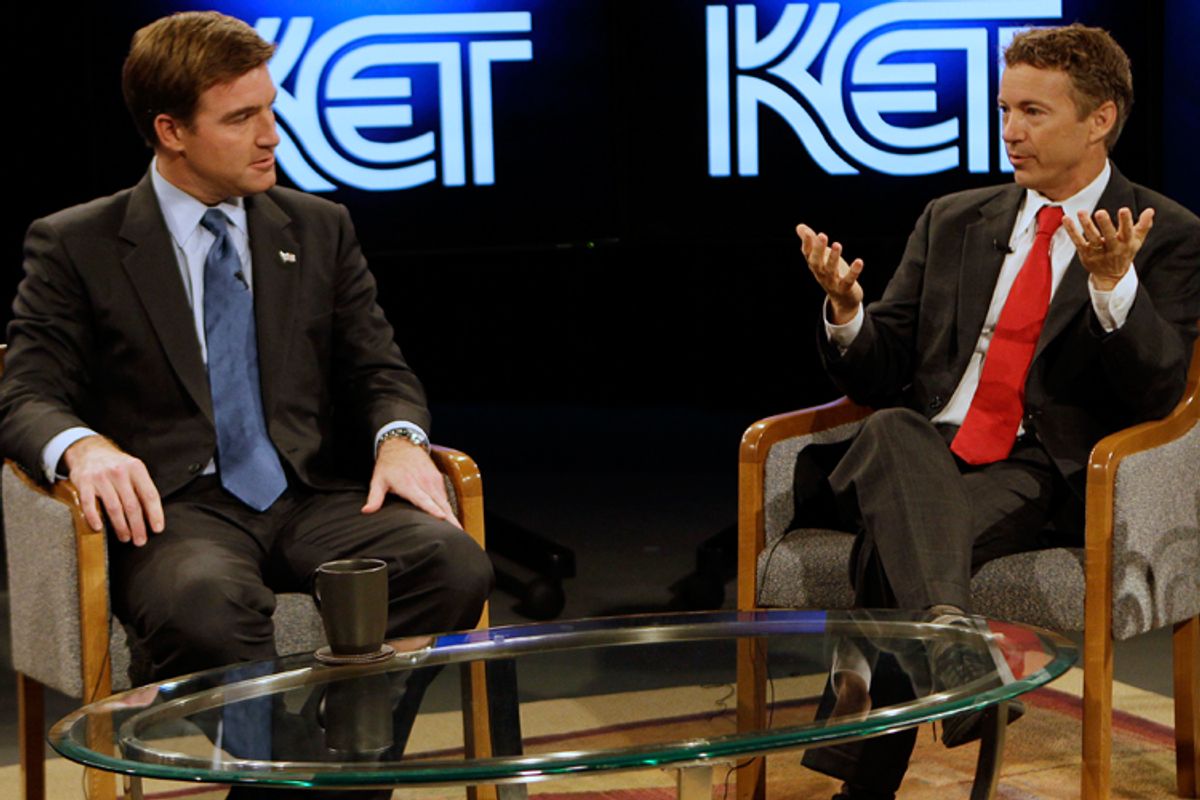 Rand Paul pitches his candidacy as an outlet for voters who are tired of "career politicians." But in the final debate of Kentucky's Senate campaign on Monday night, he behaved exactly like one, ignoring direct questions that he didn’t want to answer and nimbly changing the subject whenever the conversation veered into uncomfortable territory.

Take, for instance, the subject of the Civil Rights Act of 1964. Unless you've been in a coma for the past six months, you remember Paul's notorious interview with Rachel Maddow back in May, when he objected to Title II of the act, which outlawed discrimination in restaurants, hotels, motels and other establishments that engage in interstate commerce. "Had I been around," Paul told Maddow, "I would have tried to change that." Only later, after a torrent of criticism rained down upon him, did Paul publicly state that he would have supported the entire '64 Act.

When he was asked at Monday's debate to calm any concerns voters might have on the issue, Paul played dumb. "I never said that I believed anything remotely regarding segregated lunch counters," he said. "I never said I was for a repeal of the Civil Rights Act." Then, without elaborating any further, he claimed that the entire controversy was manufactured by his Democratic opponent, Jack Conway, who "doesn't want to talk about a balanced budget and term limits and reading the bills." Before you knew it, Paul was praising the Tea Party movement and bragging that he'd drawn 1,000 supporters at a recent rally in Paducah.

That's the kind of night it was. The one-hour debate featured several calls from viewers, one of whom asked Paul about his habit of wading into controversy and then blaming the media and his opponents for twisting his words. Specifically, the caller -- and later, the moderator -- quizzed Paul about his past declaration that Social Security is a "Ponzi scheme." Sure, the comment is years old, but it was uttered on a statewide public affairs show and it seems consistent with the libertarian philosophy that Paul and his father are known for. But confronted on Monday, he wouldn't own up to saying it, avoiding the issue with more complaints about Conway's attacks.

"It's sort of hard to argue against a straw man argument that they developed that aren't my positions," he said. (He also dismissed the caller's question by saying, "I think this wasn't an undecided voter.")

At another moment, Paul sniffed at "the fiction of jobs saved" by the stimulus program enacted last year. The moderator interrupted to ask if Paul believed economic conditions might be better now had a larger stimulus program been put in place. His response was dismissive.

"The people who are saying that, Krugman and others, were wrong about this, didn't predict this coming," he said. Actually, Paul Krugman, the economist and New York Times columnist, did predict from the moment the stimulus passed early last year that it would be insufficient and estimated that the final compromise that won it Senate approval, a cut of $86 billion in the package's size, would alone cost the economy 600,000 jobs. But pretending Krugman never wrote this served Paul's purposes just fine; better to pretend advocates of more stimulus are just making excuses for the failure of the initial package to fix everything.

More maddening than Paul's slipperiness, though, was the realization that he'll probably get away with it. Kentucky is a conservative, Obama-phobic state, after all, and the climate of 2010 couldn't be worse for the Democratic Party. A generic, boring Republican (like Trey Grayson, the Mitch McConnell disciple defeated by Paul in the GOP primary), would be ahead by about 15 points right now. But Paul, with his provocative antics, has tested Kentuckians' desire to vote against the Democrats. Still, while his polling advantage is smaller than it should be, he is nonetheless ahead -- and has been for the entire campaign.

Viewed in this context, Conway probably needed a dramatic slip-up by Paul to gain the traction he needed from this debate. Instead, most of the time was spent on issues on which, in Kentucky in 2010, Paul just can't lose He bashed Barack Obama's "2,500-page healthcare takeover bill," railed against members of Congress who don't read every page of every piece of legislation, and claimed that the Wall Street reform bill is "exactly wrong and, I think, very dangerous for our economy." And on and on.

"This election is about which agenda you want," he said at one point. "Do you want President Obama's agenda, which believes in government as the mode of stimulus?"

From a policy standpoint, Paul was on shaky to laughable ground. But politically, his rhetoric is likely to resonate with Kentucky's swing voters, who are motivated primarily by their own anxiety. All they know is that Democrats run everything in Washington and that joblessness hasn't been this high in decades. Paul's claims that individual Obama policies are wrongheaded, counterproductive, and downright dangerous sound about right to them.

There's not much that Conway can do about this. He played a lot of "me too" on Monday, bashing the Wall Street bailout and cap and trade and arguing that the healthcare reform law needs to be altered (but not junked completely), but his party label makes it unlikely that voters who are preoccupied with these issues will support him. His stage presence also left something to be desired. While Paul sat up straight and spoke forcefully and with inflection, Conway's delivery was subdued and he spent far too much time looking at his own lap while speaking.

Maybe between now and next Tuesday Paul will wander into one more political landmine, one explosive enough to erase the five- to seven-point lead he now seems to enjoy. But he avoided doing so on Monday.