Both women are using entertainment values to manipulate their audiences, and we deserve better 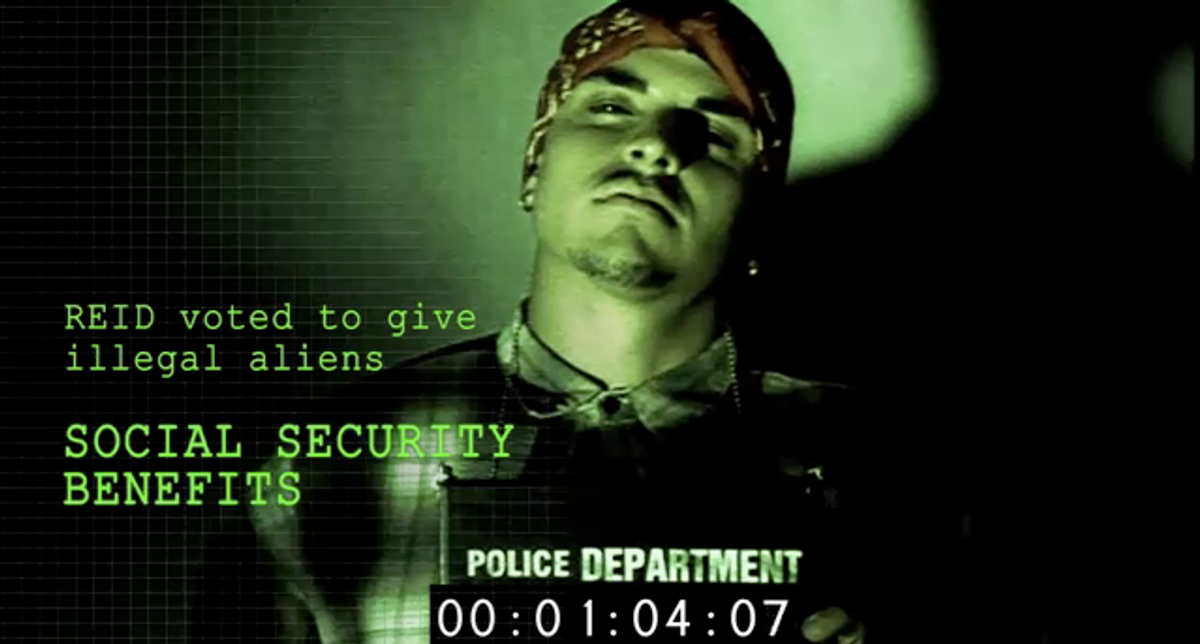 Here’s the commercial that, after appearing in a break on "The View," inspired Joy Behar to look at the camera, call Sharron Angle a "bitch" and proclaim her Dantesque future by saying that she is "going to hell, this bitch."

The spot opens with Sharron sitting peacefully with a mug of coffee -- it's a benign suburban tableau, or even a talk-show moment -- and she tells us that she approved the message that brought such rancor to Joy. Then the Mama Grizzly attack begins: a series of images that portray an Arizona under siege. A predictably ominous announcer paints a picture of "Waves of illegal aliens streaming across our border, joining violent gangs ... forcing families to live in fear."

The images are grainy, black-and-white shots of streaming Mexicans; there's even a clever quick cut to a video monitor that's capturing images of the illegals. It feels like real time.

The announcer continues: "And what's Harry Reid doing about it? Voting to give illegal aliens Social Security benefits, tax breaks and college tuition ... even siding with Obama and the president of Mexico to block Arizona's tough new immigration law."

I believe that what Joy found most offensive about this ad -- and what many others have also spoken out against, including Elisabeth Hasselbeck -- is the iconography as opposed to the words. The ad is a visual anthology of every stereotype of Mexican youth -- head-scarf-wearing, gang-joining, border-busting, mug-shot-glaring, tattoo-flaunting ruffians. Contrast this with the shots of innocent young white kids in school, as the announcer notes that Reid voted against making English our national language twice. Officer, officer, come quick; they're stealing our language from us!!

The spot closes with a pronouncement that makes Harry Reid not just complicit in these waves of terror, but in favor of them: "Harry Reid. It's clear whose side he's on. And it's not yours."

The spot is so over-the-top that it crashes into parody. Angle has been bashing Reid on his immigration policies from the beginning, but I don't think that's driving her slim lead over Reid in the polls; the resentment against "Leader Reid," as Obama calls him, is deeper than that, although Rasmussen calls the race a "toss-up." I think the public has pretty much made up its mind on immigration, and a spot like this might actually win Reid some sympathy because it's such a wicked assault, and does clearly cross the line into ethnic politics. If the spot dooms Angle to hell, it would be an ironic fate; better to be doomed to a life of eternal pain for something sinfully effective, or sexy and pleasurable.

In her rant, Behar called this a "Hitler Youth commercial" and that Angle is a "moron on top of being evil." Of course, Behar is an entertainer, so she's permitted -- indeed encouraged -- to use invective, to make invidious comparisons, to do whatever she has to do to get ratings and support her brand.

But the truth of the matter is that Sharron Angle is an entertainer as well -- and the "Wave" commercial is her entertainment product. It's designed for effect, like Behar's assault. And like Behar, she uses shock to attract and connect with her audience, and trots out stereotypes to attack: grimy, thieving Mexicans vs. neat rows of obedient Hitler Youth. So both Behar and Angle are using entertainment values to manipulate their audiences, and we deserve better no matter who's sitting in front of the coffee cup.