The fruits of right-wing populism: Free rein for the financial sector greed, irresponsibility and disaster 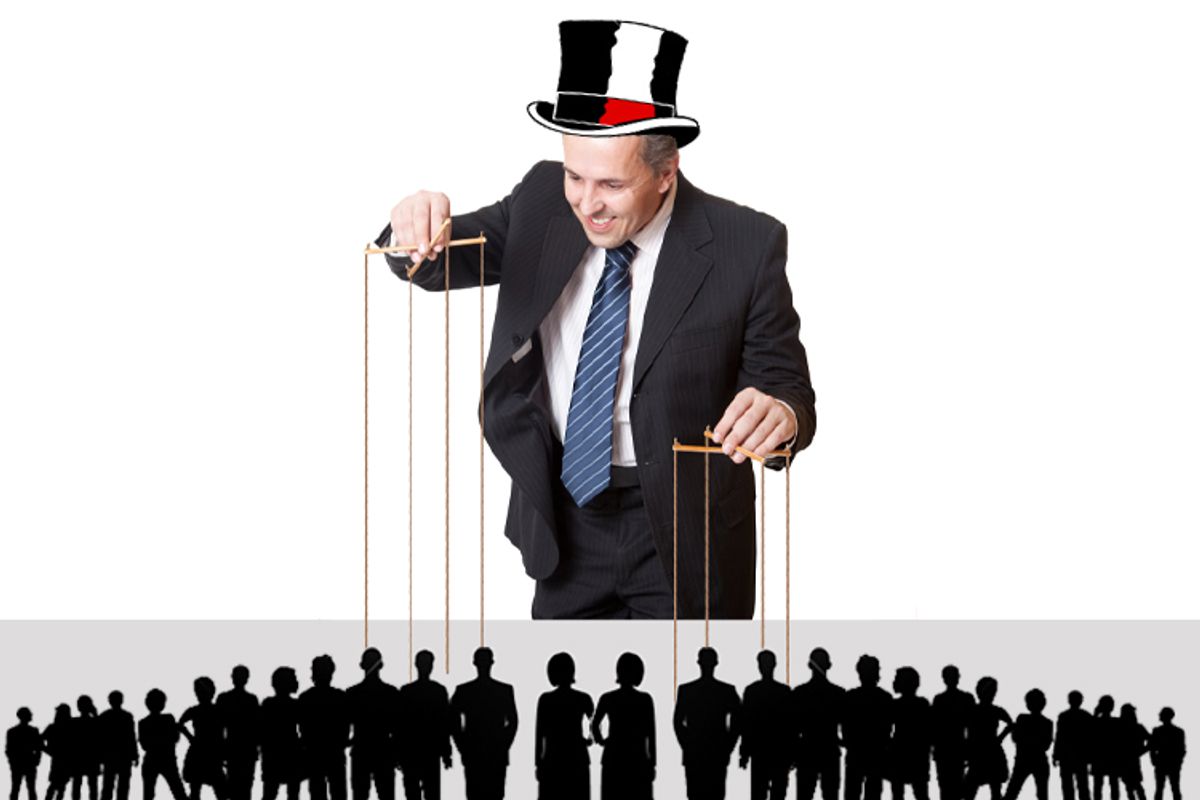 Call it the amazing bank bailout boomerang. Even though few things enrage Tea Party rebels more than government checks made out to Wall Street financial companies, the reverse dynamic does not seem to be a problem. The top 12 Senatorial candidates most favored by Tea Partiers have already hauled in $4.6 million in campaign contributions from Wall Street. Even more amazing is a tidbit reported by the Washington Post:

The two top recipients of money from companies receiving TARP funds are the top two House Republicans, Minority Leader John A. Boehner (Ohio) with $200,000 and Republican Whip Eric Cantor (Va.) with $187,000. They are followed by the ranking members of two key House committees, Spencer Bachus (Ala.) on Financial Services and Dave Camp (Mich.) on the tax-writing committee.

Let's spell that out: The Wall Street banks that were bailed out with taxpayer money are using their profits to bankroll Republicans who now claim to be unalterably opposed to any more bailouts, ever, for all time, in any universe -- even though the original TARP bailout was a Republican idea, signed into law by a Republican president, with the strong backing of the Republican leadership of both the House and Senate.

OK. We know that Wall Street always backs the likely winner, and its priorities here are obvious: weaken financial reform legislation and head off any tax hikes that could discomfit the wealthy. But there is still a massive paradox in play. Republican electoral momentum is in no small part fueled by Tea Party resentment against the government/Wall Street nexus. The roots of that Tea Party anger can be traced directly back to one signal event: the bank bailout.

The TARP bank bailout was extraordinarily unpopular with both the left and the right. While the financial crisis caused by irresponsible banks crushed average Americans, causing millions to lose both their homes and jobs, the banks got a massive get-out-of-jail-free card. Never mind the (probably valid) rationalization that it all would have been much worse if the banking system had simply been allowed to fail. That may well be true, but it's equally true that the banks got bailed out while the majority of Americans got screwed. There are plenty of other motivating forces behind Tea Party rage -- fear of big government "socialism" and racial antagonism, to name just two -- but that sense of basic unfairness generated by the sight of fat cat elites getting away with murder is the bedrock foundation underlying populist anger.

Americans are united on this point. But while the left feels that the solution to the problem lies in restricting Wall Street's freedom to run amok so that the mistakes of the past aren't repeated, Republicans, at least as represented by Republican politicians, are determined to keep the reins as loose as possible. Thus the paradox: If the Republicans take the House, they will do their best to gut regulatory attempts to restrain Wall Street. Tea Party rage, translated into Republican political gains, will amount to another get-out-of-jail-free card for Wall Street.

There is little doubt at to what congressional Republicans intend to do. They won't be able to repeal the Dodd-Frank bank reform bill, as both Senate and House Republicans threatened to do in the immediate aftermath of the passage of Dodd-Frank, but they're plenty capable of throwing lots of sand into the gears of governmental regulatory machinery. In 2011, Congress will write scores of rules designed to implement Dodd-Frank. If House Republicans control the relevant committees that make financial policy, they will have an influence on how those rules get written.

Spencer Bachus has already declared that he wants to remove Dodd-Frank's authorization for regulators to liquidate "too-big-to-fail" institutions. Other priorities include defunding the Consumer Financial Protection Bureau, heading off restrictions on computerized high-speed trading, and weakening the rules aimed at preventing big banks from conducting proprietary trading on their own behalf at the expense of their clients' interests. Republicans also plan to use committee hearings to send a message to oversight agencies such as the SEC: "Overzealous" crackdowns on Wall Street will no longer be in fashion.

Republicans will, in short, tell Wall Street that its two-year national nightmare is over. The government will no longer be "anti-business." Deregulation will once again be the order of the day.

That's what Wall Street is paying for, and that's what it looks like Wall Street will get. But is that what the Tea Party grass roots really wants? A return to the anything-goes era of Wall Street knows best?

There is, to be sure, an underlying synchronicity between "free" market values and the ideal of "liberty" so precious to Tea Partiers. When Jeb Hensarling, R-Texas, another high-ranking member of the House Financial Services committee, says his stance on regulation will be "If in doubt, let freedom ring," the perfect match between the ideology of the rebels and the desires of Wall Street chimes like a perfectly cast bell. The Tea Partiers want freedom from Big Government, and so does Wall Street! What could be more understandable?

The disconnect is that freedom for Wall Street, in practice, leads to less freedom for the rest of us. Or at least that's what the evidence of the last few years appears to demonstrate. Why are so many Americans angry? Because millions of us have suffered as a direct result of the irresponsibility and greed of a few. Because loosening restrictions on Wall Street did not result in greater prosperity for everyone, but in a calamity the likes of which the nation had not seen in 80 years.

Last time around, America learned its lesson, and institutions like the Securities and Exchange Commission were created to protect Americans from Wall Street abuses. This time around, the difference couldn't be sharper, more dramatic, or more ludicrous. Republicans are campaigning on a pledge to go easy on Wall Street! Republicans are campaigning on pledges to weaken regulations that were never that strong to begin with. The very financial institutions whose bailout enraged so many nascent Tea Partiers are harnessing that rage for their own benefit, and laughing all the way to the bank.