The Giants would be lovable even with Barry Bonds

The national media is happy San Francisco at last has a team it can love. Nonsense, but we do love this club 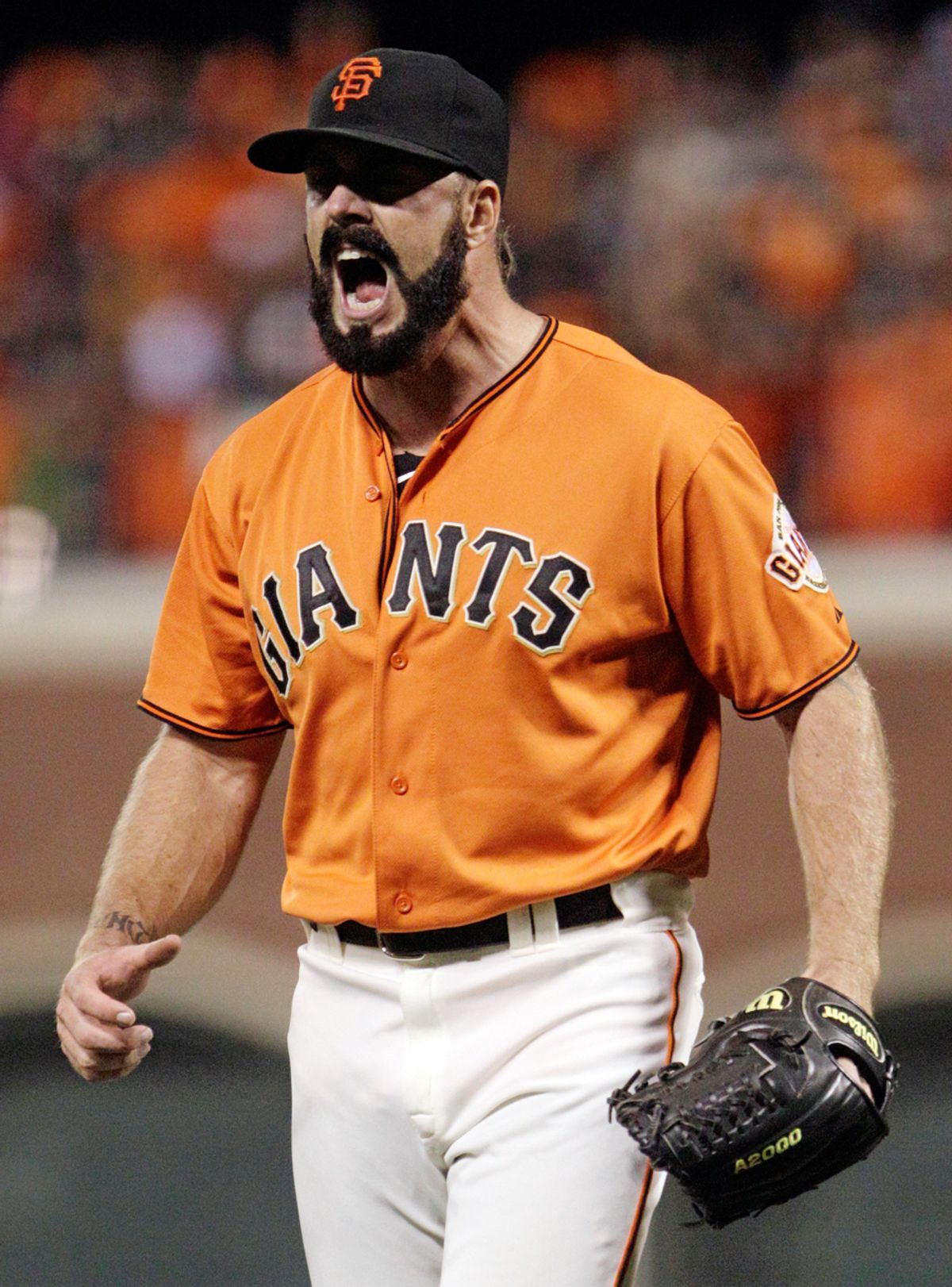 I was sitting at the thrilling last game of the 2010 San Francisco Giants season when a friend texted me an impossible question: "Have you decided on your favorite Giants team? Is it 2010? 2002? 1997?" Inexplicably, she left out the great 2000 National League West division winners, as well as what was probably my real favorite -- if I had one, and I don't -- the 103-win second-place team in 1993, the first year of the glorious Dusty Baker/Barry Bonds era.

The question threw me. I'd never given any thought to my favorite Giants team. I've loved most of them, even the losers. The bitter 2002 departure of manager Baker left me cold, but these 2010 desperadoes won me back, and the seduction started last year, when they played tough, exciting baseball late into September.

I loved the 2009 Giants, from the eccentricity and dominance of the pitching staff -- especially two-time Cy Young winner Tim Lincecum, sturdy, reliable Matt Cain, erratic but talented Jonathan Sanchez, he of the first Giants no-hitter in my adult lifetime, and the incomparable closer Brian Wilson -- to rookie Pablo Sandoval, batting (and maybe weighing in at) .330, and blogging veteran catcher Bengie Molina. Still, I could no more pick my favorite Giants team than my favorite child or sibling. I never tried.

But my friend's query prepped me for what would become a national media obsession this postseason: explaining to the world, and San Francisco fans, why our team this year is so much more lovable and fabulous and deserving of glory than earlier Giants champions, particularly the 2002 team. And you know why.

Led by Bonds, the surly steroid-tainted superstar with the big head (literally), the club of eight years ago was Barry's team, the national scribes report, not ours. Those guys may have had more talent, sure, but they had much less heart. The point's been made so often this October, and so repetitively, you might find yourself wondering if there's an iPhone app that lets you make lazy Giants-team comparisons.

SI.com's Joe Posnanski kicked it off the day after the Giants clinched the division title with a column headlined "These Lovable Giants." Of course they're not to be confused with the 2002 team led by "one brilliant, moody, thrilling, haunted, indomitable and often ticked-off man named Barry Bonds. He was so good at playing baseball, so preposterously good, that the San Francisco fans had to try and embrace him." Note that word "try" -- we had to try to embrace Bonds, as though it didn't come naturally and wasn't ultimately successful.

Then came ESPN.com's Mark Kreidler, with "Life without Barry Bonds? A treat: These Giants are actually likable! Couldn't say that when Barry Bonds was around." Got that? They weren't lovable -- they weren't even likable! The Washington Post put it this way: "With misfits in place, Giants leave Bonds far behind." But the worst came from AOL Fanhouse, whose Terence Moore suggested that the delirious standing ovation Bonds received from hometown fans at the first game of the NLCS last week meant "Giants Fans Glad to See Him Gone."

I don't know a single San Francisco fan who saw the outpouring for Bonds that way, but I am glad Moore came along to tell us what we really feel about Bonds, whether we realize it or not.

Now, Yahoo's Jeff Passan saw it the way I do, and most Giants fans do -- that fans cheered Bonds at the game last week because they still love Bonds. Unfortunately, for Passan, that makes us moral and psychological midgets: In fact, we were "brainwashed" by Bonds, he insists:

You'd think that a few years would allow Giants fans to realize that Bonds hijacked the franchise, and that no matter how good he was -- and his seasons last decade rank with Babe Ruth's among the best ever -- what he brought to the Giants was poisonous. Bonds infected the clubhouse, the culture, not to mention the game's (relative) integrity. San Francisco deserves a hero worth cheering about, not some narcissistic, disgraced attention whore whose bounding out of the dugout to throw out a first pitch last week was greeted with an enormous ovation. Bonds played to the crowd, jumping up and around, and they gave it right back."

The great thing about being a Giants fan is you learn early how to endure the national media's East Coast chauvinism -- and by now we've had years of experience dealing with their irrational hatred of Barry Bonds, too. This year's anti-Bonds stories aren't just derivative of one another; they're cadging a narrative from 2002 as well. That's when Jeff Pearlman of Sports Illustrated kvetched, "There is no God," because the team of dastardly Barry Bonds and Kenny Lofton beat Tea Party Tony La Russa's morally superior St. Louis Cardinals. We were the devils playing the Angels -- and even after the names of Angels stars Troy Glaus and Scott Spiezio were among the many that later came up during baseball's long steroid scandal, Bonds remained the devil.

So real Giants fans know the truth: It's possible to love the Giants of 2002 and 2010, to see the differences -- and some similarities, too. Leaving aside Bonds and the great Jeff Kent, that earlier team had guys who were (almost literally) left for dead; catcher Benito Santiago hadn't been expected to play baseball again after a devastating car accident in 1998; he was NLCS MVP. Career .257 hitter David Bell, who played for six teams, scored the series-winning run against the Cardinals; washed-up ex-Cub Shawon Dunston (now a Giants coach) hit a two-out single to set up that win. The postseason wasn't all about Barry.

Still, it's not giving into the cheesy media narrative to admit this is an extraordinary team that wasn't supposed to be here (don't believe anyone who said they picked these Giants to win back in the spring). First baseman Aubrey Huff had no offers when the Giants signed him; Pat Burrell had been flat-out released by Tampa Bay; NLCS MVP Cody Ross was claimed in August when the Florida Marlins put him on waivers. Center fielder Andres Torres, clutch in that wild AT&T outfield as well as at the plate, is 32 and never before played a full season in the majors.

It is possible that no Giants team in my years here has been embraced so thoroughly. I just know we've got swag that celebrates this funky team accordingly. You can buy hats with long Lincecum-like locks attached, as well as T-shirts saying, "Let Timmy smoke" (the Cy Young winner was arrested in the offseason for marijuana possession) and most recently, "Fuck Yeah!" commemorating the star pitcher's recent NSFW comments on national television.

You can buy panda hats to honor Pablo Sandoval. There are fake black beards everywhere, thanks to the increasingly strange (and dominating) Wilson. I've even seen a few rally thongs, made famous by Huff, who put on a red, rhinestone studded thong to bust a slump in August and claims to have worn it ever since. You can listen to fan-made musical tributes to Huff's rally thong (to the tune of Elton John's "Your Song" -- that's right, it's "Your Thong"), to clutch pinch-hitter Travis Ishikawa ("Ishikawa da vida, baby") and the entire team: A video using Journey's "Don't Stop Believing" has had more than a million views on YouTube. The outpouring of creative fan-made Giants tributes makes it seem as though these overachieving everymen have brought out the dreamer in everyone.

But we shouldn't pretend these Giants are without traditional stars, either. Philadelphia fans may call him "hippie trash" but Lincecum's a three-time All-Star; Wilson's gone twice. Catcher Buster Posey might be the National League Rookie of the Year. He's got the modesty baseball writers like to see in a young star -- asked about an "epic" game last week, Posey said, "Well, thank you" -- but he's no castoff either. Along with Cain, Sanchez and 21-year-old rookie Madison Bumgarner, the Giants have the best starting rotation and one of the best catchers. You can overdo the misfits and castoffs storyline.

Now they're facing another unlikely collection of stars and has-beens, the Texas Rangers. While the Giants have never won a World Series in their current city, the Rangers have never brought one home. There's so much to like about Ron Washington's team, starting with Washington, a beloved baseball leader who had his own setback this year when the story broke that he tested positive last year for cocaine.

Young superstar Josh Hamilton had epic substance-abuse struggles; now the team celebrates its big wins by spraying him with ginger ale, not champagne (or beer; please stop spraying beer, guys, all of you. OK?). We even get to see Bengie Molina play in the World Series -- against our team; not what Giants fans fantasized, but it's a great storyline nonetheless.

Just in case you worried that the unfamiliar love of the national media might disorient the Giants and throw them off their game, take heart: Now all the big sports guys are calling it for the Rangers. It's OK: They've got Rob Neyer. We've got Brian Wilson. I'll take that. If you want to understand what's going on in San Francisco, just watch these videos. I haven't seen anyone show up at the ballpark dressed as "The Machine," but the Series doesn't start until Wednesday night. There's still time. Don't stop believing.