"In Treatment": Meet Jesse and Adele 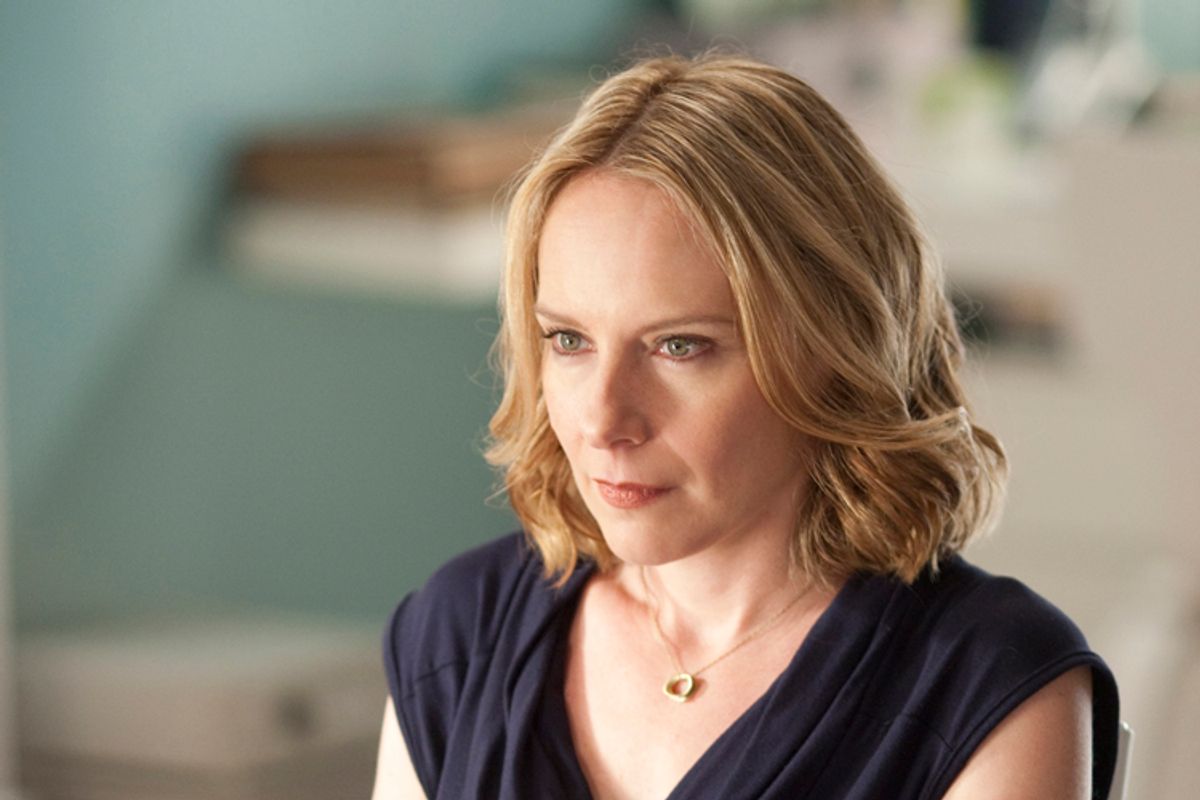 Remember yesterday, when I said I suspected "In Treatment" without the original Israeli scripts would probably be much less confrontational? Ya, so, I'm officially taking that back now.

For the first time in the history of the show Paul has actually said to a patient "don't speak to me like that." This to Jesse, a gay, adopted 16 year old he has been seeing for a while. It happened after Jesse (Dane Dehaan) told Paul to "put his dick back in his pants" after he expressed concern about Jesse's relationship with two older men. A lean, skittish, slutty provocateur, Jesse seems to be fueled by a diet of Adderall and negative attention. He's recently been selling his Adderall, so he's now coming off a bad behavior binge. By the end of the episode we will discover the trigger. Earlier this week Jesse received a phone message from his birth mother.

Every season "In Treatment" has an ingenue part with a young actor whose career is obviously on the rise. In season 1 it was Mia Wasikowska as the acerbically funny, suicidal gymnast, Sophie. In season 2 it was Alison Pill as April, the rigidly independent architecture student with cancer. This season it's Dehaan. In the space of half an hour, I feel like I've watched about three different performances while sipping a genetic cocktail made of two parts James Franco, one part Angelina Jolie and a dash of Justin Bieber. I mention Jolie, because there's something very reminiscent here of her break out performance in "Girl Interrupted." Jesse is a hurtling hellball of charisma and pain. One minute he's the geeky hipster too in love with the expensive camera, given to him by someone, he doesn't remember whom. The next he's curled up on the couch, staring out with the eyes of a suicidal nympho. Finally he's the faux sophisticated adopted kid with a fantasy life about a birth father in Doctors Without Borders and a birth mother who he long ago decided was a crack whore. If J.T. Leroy, the teenage truck stop prostitute/literary hoax, still existed, I'd expect to find that name in the writing credits this week.

In the next episode "Adele: Week 1" Paul describes the frustration of treating Jesse. "There are times in that room where I really feel we connect. And then he goes back into the world, the real world, and he implodes, and everything we've done together, it's just gone." By the end of this week it looks like Paul may start feeling this way about his own two decades of therapy with Gina.

Adele is Paul's new psychiatrist who he has come to for an Ambien refill. Is there an actress on the planet right now more astonishingly versatile than Amy Ryan? As we know from her performance in "Gone Baby Gone," if Jesse's mother did turn out to be a crack whore, Ryan could have played her. She's been brilliantly understated in "The Wire", and hilariously loopy in "The Office." Now she's the humorless, but razor sharp psychiatrist about to make Paul and Gina look like a couple of aging life coaches from the Omega institute.

In his final session with Gina last season, Paul described his crisis of faith in the therapeutic process as "two mice stuck in a glue trap." The almost blinding brightness of Adele's office compared to Paul's is obviously designed so that we may compare them both as analysts and rodents. He describes his own office as a mole cave. This also sets up his persistent burrowing technique against her quick vermin attack and retreat style. It also serves to make Ryan's skin look especially pink. With her petite, but sharp features she comes off as a lab rat with a 195 I.Q.

Paul needles her about her youth and lack of experience compared to him and Gina, whom he describes as the best analyst on the East Coast. Adele responds: "I just want to make sure I understand something. You say Gina Toll was your teacher. And then she was your supervisor. And after that your analyst. And she also saw you and your ex-wife as a couples therapist..." She lets out the next words, "I see," as a knowing sigh.

Paul is outraged. "What do you mean 'you see'?  What are you implying?"

"I'm not implying anything" Adele insists. "I'm just trying to understand the methods of one of the best analysts on the East Coast."

"Are you ... kidding me!" Paul slams back. "What are you 36 years old? You've been practicing for three or four years at the most. Who ... are you to question my treatment over the past two decades?"

To which Adele responds, "You've been resistant to discussion since you came in. I'm trying to get as full a sense as I can of why that might be."

Bull's eye. Paul confesses his despair over the possibility he might have Parkinson's. Once he's opened up, he starts to play up his pathetic transparency, suddenly ashamed at having shown up with a copy of Gina's new novel sitting next to him on the couch, like a "security blanket." He reads the blurbs in a slightly sarcastic tone "Insightful and sharp. A masterful suspense for the human psyche" says Lorrie Moore. "Wise and deeply empathetic," says Amy Bloom. (Let us now pause to imagine Julia, the control freak/literary agent from "Sunil: week 1" at Gina's book launch.) Perhaps he thinks he and Adele can now bond over Gina's possibly suspicious accomplishments.

But Adele nails him on both his jealousy and his ambivalence towards women. "What are you jealous of?" she asks.

"That she found a way to escape."

There's no escape for Paul. Adele has him in the glue trap tight.

She has me too.