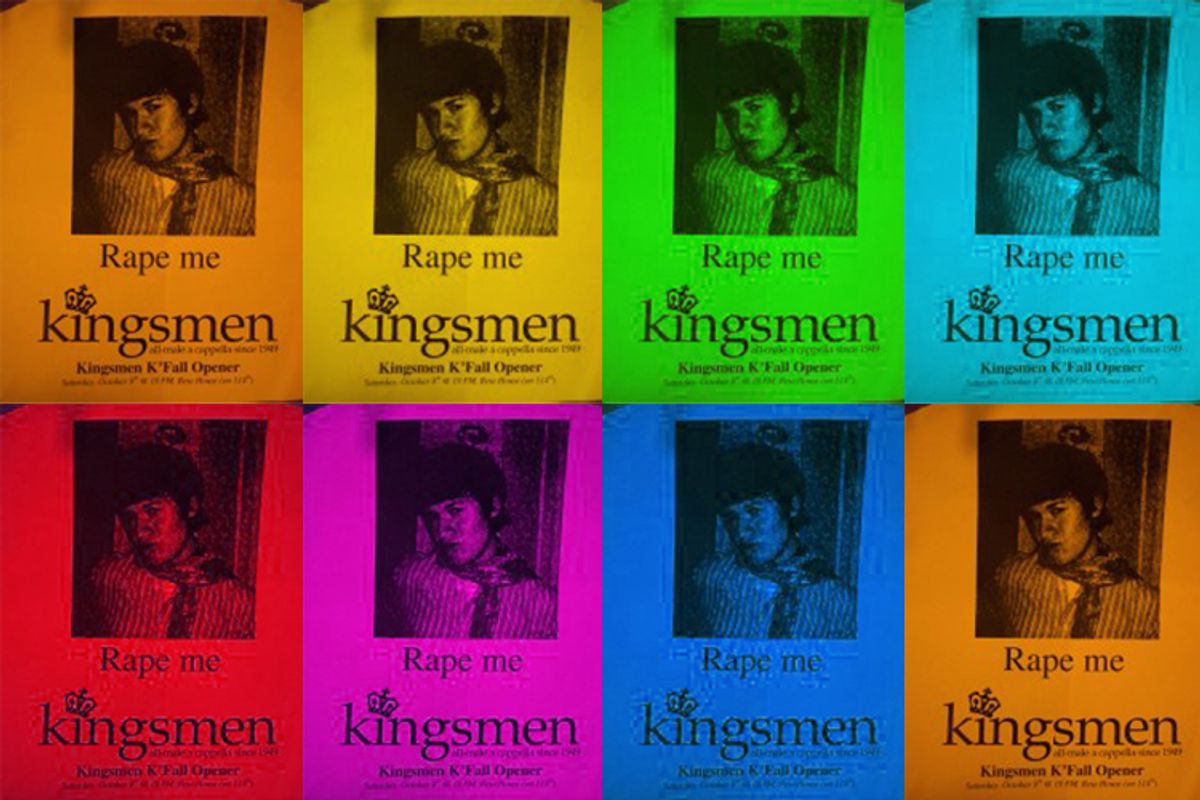 A rendering of the original poster
--

It's almost like there's an Ivy League conspiracy to get us talking about rape. On the heels of Yale's "rape chant" ordeal, there comes word that Columbia University's all-male a cappella group posted fliers around campus earlier this month that featured a shot of one of its members wearing a jaunty scarf and pursing his lips. Underneath the photo, it read, "Rape me."

Student group LUCHA released a statement calmly explaining the issues with the poster: It creates "a caricature out of gay men" and "the subject's 'desire' to be raped trivializes the link between sexuality and homophobic hate crimes." Also, the group's makeup "emphasizes the inconsideration of the message given the reality of the disproportionate amount of women to men who are affected by sexual violence." Kingsmen has already issued an apology to the community, acknowledging that "the flyer is unduly offensive and inappropriate." The statement continued, "Kingsmen may often use off-color statements in an attempt to lampoon social norms or comment on current events, both on campus and in the media -- the flyer in question does neither." As for how the poster came to be, they write:

An utter lack of judgment and an embarrassingly complete sense of tunnel vision. To clarify, the young man pictured on the flyer is one of our own members. Many minutes were spent on Facebook in search of the goofiest picture we could find of one of our members; this was it. The combination of the image with the statement were never intended as anything more than a laugh at the expense of that Kingsman. Unfortunately for all, we did not put any more thought into it than that.

Their explanation is awfully reminiscent of the one given to me by the anonymous Delta Kappa Epsilon member that I interviewed last week about the Yale upset. He said, "The reality is that there wasn't much intent. Part of the problem was that the chant was carried out without thought to the larger consequences of our actions. Whatever its purpose, it doesn't excuse the inappropriate content of the chant." He also argued, as the Kingsmen have, that this "rape" situation was an anomaly and was not part of group tradition or culture. In the case of DKE, it was by definition a part of tradition, as it was a ritual passed down for years. In this case, it seems the peak nadir of edgy and politically incorrect statements, many of which have hinted -- humorously! -- at violence against women. That includes a flier featuring Rihanna -- the famous face of domestic violence -- and the phrase "I'd Hit That." Also, one reading: "Take back the night back." (Take Back the Night happens to be the name of a march against rape.)

I e-mailed the Kingsmen requesting an interview, explaining that I had done a Q&A with a member of Yale's beleaguered DKE. "My hope in that case was to spark a respectful discussion and to hear the fraternity members' side of the story instead of just piling on," I wrote. "I'd love to do the same thing in this case." Ash Swamy, the group's business manager, responded in part:

I have a couple of concerns regarding the language of your message, first of foremost being that you've coupled our incident with Yale's DKE. We are well aware of what happened at Yale, and do not condone that sort of behavior. Secondly, we are not a fraternity, we're an a cappella group that has performed at numerous service and community events throughout the New York area.

Our incident was an unfortunate one, and we greatly regret the inappropriateness of our actions. That being said, we do not haze, nor do we encourage in [sic] bigoted behavior. Our poster, taken from Nirvana's lyrics [see here], was in poor taste. We have no interest in engaging in further interviews on the subject. Increasing publicity on this incident only perpetuates the same debates.

It perpetuates a debate that needs to be had, though. Fraternities might have a douchier reputation than all-male a cappella groups, but the fact of the matter is that there isn't any meaningful difference between the two when it comes to this sort of stunt. Both used rape as a joke, admittedly without much thought, and with some history of similar behavior. Talking gets people thinking critically, and that is something apparently lacking in certain corners of America's finest universities.