What do opium dens have to do with the World Series?

Drugs, foreign labor and the Giants coming to bat at AT&T Park: The Hong Kong connection 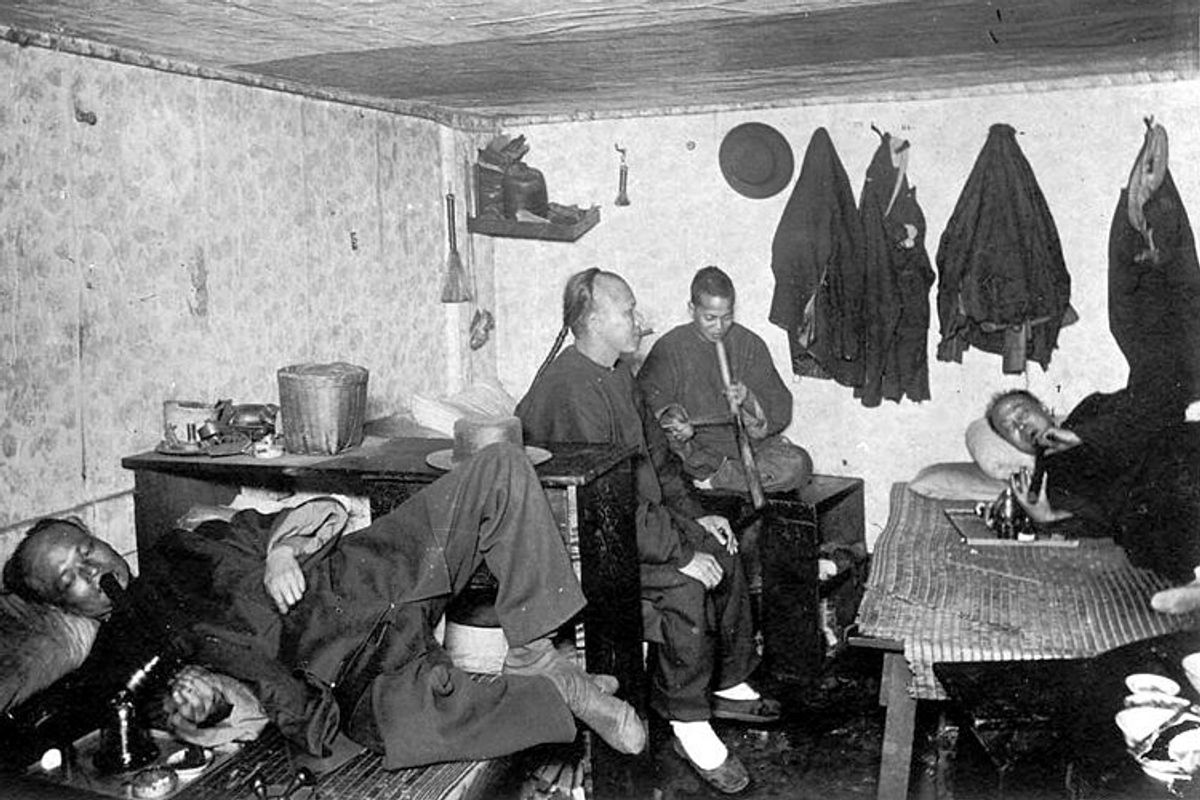 An opium den in a San Francisco boarding house during the late 19th century.
--

If Bloomberg specifically intended the headline "World Series Gives Giants Chance to Renew City's Opium-Den 'Last Frontier'" to work as click-bait, well, what can I say but that the strategy sure worked on me. Out here in the San Francisco Bay Area, Giants fervor has almost overshadowed the fact that a big election is just around the corner and the economy still sucks. Mix in some opium dens, and you've got a winner!

But tut tut, Bloomberg. The term "opium dens" can't actually be found in the story, which turns out to be primarily focused on the potential for additional urban redevelopment in the neighborhood near AT&T Park known as "China Basin." What is now called Willie McCovey Cove was once a major trans-shipment point for goods from the Far East.

The ballpark itself sits where the Pacific Mail Steamship Company unloaded silk, tea, rice and opium from Asia in the early 20th century. That commerce, and the large number of Chinese workers on those docks, led to the area being called China Basin.

Actually, the Pacific Mail Steamship Co. didn't just bring the opium -- it also brought the workers. Beginning in 1867, the company started a regular biweekly route between San Francisco and Hong Kong. Over the next couple of decades, around 12,000 Chinese immigrants arrived in San Francisco every year, brought over to work in gold mines and to build railroads. The opium trade followed the workers -- and it was big business for Hong Kong. During the late 19th century, as much as 20 percent of Hong Kong government revenue was derived from opium exports. There was even a specific brand -- "Gold Mountain opium" -- to refer to opium destined for gold rush countries.

The opium usually originated in India -- in fact, as noted in HTWW a few years ago, India's giant Tata business conglomerate traces its roots all the way back to Jamsetji Nusserwanji Tata, a 19th century industrialist who got his start as an opium trader. His first cousin ran the Hong Kong office.

Tata has its fingers in just about everything, but is perhaps most well known in the U.S. for its outsourcing subsidiary, Tata Consultancy Services, India's largest outsourcer. Indeed, it is quite likely that there will be Silicon Valley tech executives in attendance at AT&T Park Wednesday night who have taken advantage of Tata's software development outsourcing services to lower their operating costs.

Such penny-pinching is, of course, exactly why Chinese laborers were brought to California in the late 19th century, along with, conceivably, Tata opium. I'm guessing that descendants of those laborers might also be cheering the Giants on in China Basin tonight.

What's the lesson here? The opium dens may be gone, but the vision remains the same. For the railroad barons of the late 19th century and the tech lords of the 21st century, cheap workers are always in demand. And maybe, just maybe, if California voters legalize the sale of marijuana next week, Californian workers will be able to dull their senses and more easily accept their exploitation, just as the Chinese workers did (legally) more than a century ago.