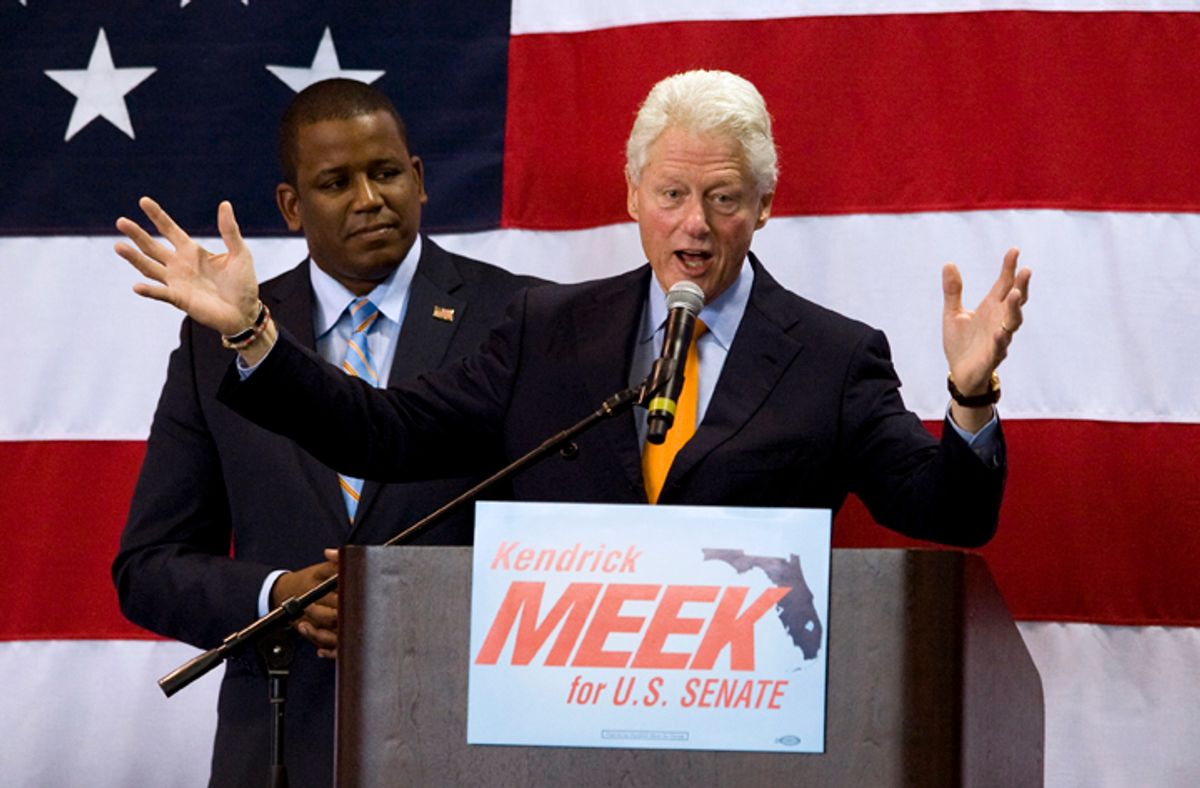 Ben Smith at Politico gets the Scoop of the Month award for his new report that Bill Clinton tried -- and very nearly succeeded -- last week to convince Kendrick Meek to end his U.S. Senate bid in Florida and to endorse independent Charlie Crist.

According to Smith, Clinton twice won an agreement from Meek, who has been running a distant third in the race with around 20 percent of the vote, to drop out and back Crist. The first time, he backpedaled after being convinced by his wife that he could still win the race. Then, after another conversation with the former president, he once again committed to dropping out -- at which point plans for a rally on October 26 (this past Tuesday) were made. But again, Meek got cold feet.

Polls have steadily shown Marco Rubio, the Tea Party-backed GOP nominee, on course to win a three-way race, with Crist and Meek splitting Democratic and Democratic-friendly independent voters. Meek's departure, obviously, could have changed the dynamic and positioned Crist to edge out Rubio. Presumably, Crist would then caucus with Senate Democrats.

In trying to talk Meek out of the race, Clinton was essentially seeking a repeat of the maneuver he engineered back in 1994, when he helped convince L. Douglas Wilder to end his independent Senate candidacy in Virginia. Wilder, a former Democratic governor who had briefly run against Clinton for the 1992 Democratic presidential nomination, had entered the race because of a bitter personal feud with Democratic Sen. Charles Robb, who was up for reelection.

Wilder's presence was seen as a boost to Oliver North, the polarizing Iran-Contra figure nominated by the Republican Party -- although a fourth candidate, Marshall Coleman, a former Republican state attorney general, was threatening to steal votes from North's GOP base. By mid-October, it was clear that neither Wilder nor Coleman would win, though both were polling at or above 10 percent. North, meanwhile, enjoyed a slight edge over Robb in the polls; the anti-Democratic climate of '94, coupled with Robb's considerable baggage, was powering him. It was in that climate that Clinton leaned on Wilder to drop out and endorse Robb, his old nemesis. Wilder eventually agreed and the president traveled to Virginia to seal the deal at a party dinner, footage from which is available below: