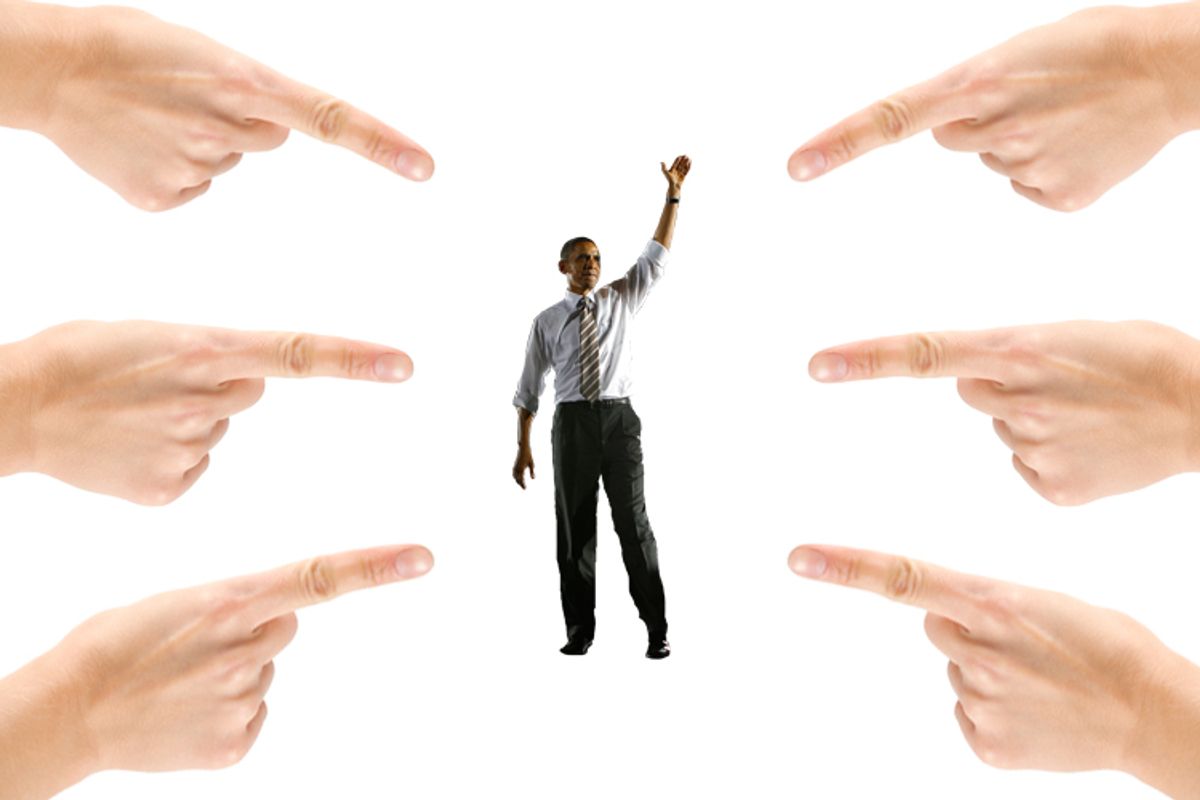 "Everybody is ignorant, only on different subjects." -- Will Rogers

Anybody seeking midterm-election predictions needs to look somewhere else. Here at the sprawling rural campus of Unsolicited Opinions Inc., company policy forbids palm-reading, crystal balls, tea leaves, bird augury and necromancy of all kinds. Weather forecasts can be useful; otherwise, it's amazing how much time a person can save by skipping news stories about what may happen tomorrow.

That said, let's face it: Any president who'd taken the oath of office last year would definitely be wading through what President Bush the Elder called "deep doo-doo" today. Given the economic catastrophe he inherited, it's a wonder Barack Obama remains as popular as he is. A recent Newsweek poll showed his approval rating at 54 percent, up 6 points from September -- a result so counterintuitive the magazine's editors halfway implied they didn't believe it.

Particularly at election time, nobody's allowed to insult the American voter by wondering whether Obama's surge in popularity might simply be a result of more TV time. "Oh yeah, that guy. Gee, he's got a terrific smile."

OK, maybe that's an exaggeration, although a recent Pew survey showed that only 59 percent of Americans can name the vice-president. Just 72 percent realize which party currently controls Congress.

Even so, to paraphrase Will Rogers, when it comes to the economy the president's biggest problem isn't so much what voters don't know as the things they know for sure that just ain't so.

"The dirty little secret," writes Washington Post financial columnist Steven Pearlstein, "is that most Americans don't really know what they think about the issues that so animate the political conversation in Washington, and what they think they know about them is often wrong."

The list of public misconceptions is long and politically crippling. Maybe the single most damaging is that the Obama administration has brought about an epidemic of government spending, tripling the yearly budget deficit and vastly increasing the national debt.

The Congressional Budget Office's projected budget deficit for FY2009, beginning four months before Obama took office, was already in excess of $1.3 trillion. Indeed, the 2011 budget deficit is projected to be ever-so-slightly lower than the one Bush left on the White House doorstep. Despite the one-time $787 billion economic stimulus (spread over three years), no huge growth in government spending has taken place on Obama's watch.

Three proximate causes of the rising national debt remain: the Bush tax cuts of 2001, his unfunded Medicare drug benefit, and the wars in Iraq and Afghanistan. Alas, stating these historical facts has been declared out of bounds. It's playing the "blame game," a formulation greatly persuasive to Tea Partiers and conservative talk-show hosts basically because it rhymes.

Yes, the United States needs to get its fiscal affairs back to where they were under the previous Democratic administration. But not by slashing spending and laying off government employees during an economic crisis, as it appears the British people, to their collective sorrow, are doomed to relearn.

People have heard Republicans say "the failed stimulus" so often that many believe it. Again, according to the CBO, the (clearly inadequate) American Recovery and Reinvestment Plan resulted in approximately 3 million jobs, the difference between a lingering recession and a full-blown depression, most economists would say.

Also, many people swear Obama raised their taxes. Actually, he cut them. Almost one-third of the stimulus consisted of tax cuts, not spending. But because the money reached people in small increments through decreased withholding, most don't know it.

And, no, it wasn't the Obama administration that bailed out Wall Street. The Bush administration enacted TARP in October 2008, although most Democrats (Obama included) voted for it. We'd all like to see more high-flying Wall Street fraudsters locked up, but TARP did succeed in saving the financial system while paying for itself.

Ditto the auto industry bailouts, an unfortunate necessity also first initiated by the Bush administration that's basically worked. Do you really think Americans would be better off without General Motors?

Even so, "Things could have been much worse" isn't much of a campaign slogan. Moreover, Obama has only himself to blame for the oddly diffident way he's gone about explaining himself. Far from being a condescending elitist, the president has tended to give voters a lot more credit than they deserve.

Hence many of the same dreamers who convinced themselves that the merry-go-round of constantly rising real estate values would help them borrow their way to prosperity now trust that the simplistic nostrums of the Tea Party will lead us safely past Big Rock Candy Mountain and all the way back to Leave It to Beaver-Land.