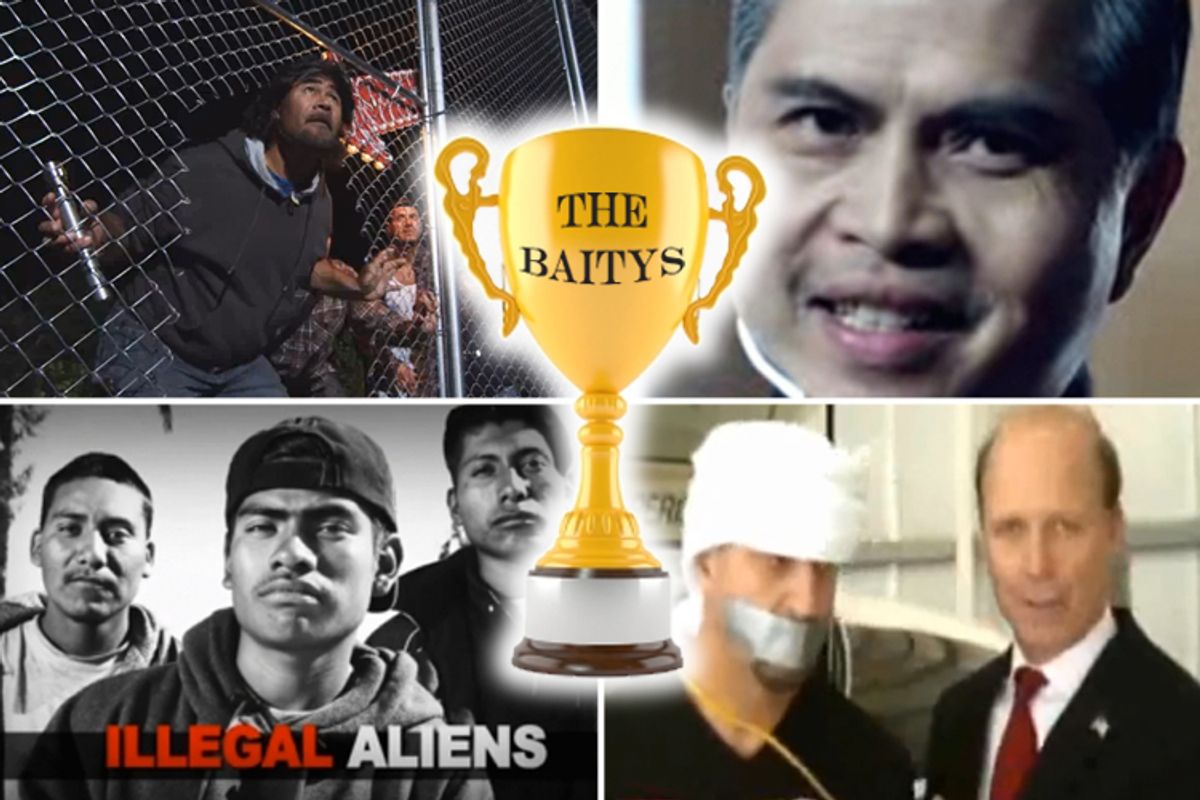 Are you scared of gang-banging Mexican illegals? Islamic sleeper cell jihadists? Chinese people? Then this was the election cycle for you! From the primaries through the week before election day, America's been blanketed with race-baiting political campaign ads from insufficiently guarded border to shining sea. Today's the day when those countless hours spent by soulless political consultants poring over stock images of young Latino men looking for the shot that screams "about to kidnap your daughter" pays off. (Election day, historically, is also that day.) We're proud to present the first annual Salon Baity Awards for Excellence in the Field of Race-baiting.

(There will be no live ceremony, so we ask you to please just imagine that the winners in each category were introduced by an oddly mismatched couple of celebrities, like Katherine Heigl and Pau Gasol.)

First up, California gubernatorial candidate Meg Whitman wins an honorary Baity for putting the border fence in her ads, then lying about it, then running a Spanish-language ad claiming that she's against the Arizona immigration law.

Our next Baity winner is one-time victim of a race-baiting whisper campaign John McCain. Senator McCain once honorably refused to support the flying of the Confederate flag. Then, ten years ago, he folded on that issue for reasons of political expediency, so I'm not sure why everyone is being such a baby about him folding on everything else he ever pretended to believe in. This ad is shameless primarily because John McCain was once a major supporter of comprehensive immigration reform (a.k.a. "shamnesty") -- but once he ended up in a primary campaign against a more conservative challenger, McCain decided remaining in the Senate was more important than standing up for the rights of immigrants. So: Complete the danged fence!

Next up: Nevada's Sharron Angle, who just may defeat Senate Majority Leader Harry Reid, despite the fact that basically everyone acknowledges that she's crazy. Angle shot out to an early lead with her "Thanks, Pal" ad explaining how much Harry Reid loves Mexicans, who are scary.

The original ad was scrubbed from YouTube after a copyright complaint by a Reuters photographer, but you can see it at the beginning of this clip from The Young Turks. You'll note that happy, white college graduates are compared to young Latino men in backwards baseball caps. Reid wants to give the Mexican ones in-state college tuition, which is for some reason horrible, because we must never allow immigrants to go to college.

This ad -- titled "At Your Expense" -- explains that Reid "sides with Mexico" when it comes to immigration. (Mexico doesn't want all those horrible Mexicans in it!)

While it looks like Angle is running away with the category, Louisiana's David Vitter -- incumbent Senator from a state that does not border on Mexico -- has some anti-Hispanic fearmongering of his own to dish out. Vitter's "Welcome Prize" is practically an insane piece of art, with its own Lynchian dream-logic.

Apparently Vitter's opponent, Democrat Charlie Melancon, hires welcoming committees -- with fireworks and brass bands! -- to meet illegal immigrants at well-marked holes in the chain-link fence that protects us from Mexico (which, again, Louisiana does not share a border with).

But this, friends, was not the end of it.

Sharron Angle's latest and greatest ad -- our overall Baity winner in this category --squeezes more anti-Latino imagery and immigration fear-mongering into 30 seconds than you ever thought possible:

The professional announcer can barely keep up with the hateful script!

(This is the ad that made Joy Behar resort to name-calling, which was news, for some reason.)

The fact that an Imam intends to build an Islamic community center in lower Manhattan became national news this summer, because Republicans are scared of Muslims. Our own Justin Elliott already rounded up the best anti-"Ground Zero Mosque" ads of the year to date. Who can forget this classic from a North Carolina candidate?

There's this weird one from Ohio Republican Josh Mandel, which suggest that his Christian opponent attends a mosque:

The American Future Fund attacked Iowa Democrat Bruce Braley for considering the Cordoba House project to be a Manhattan-area zoning issue instead of a fundamental assault on our values:

While a national Republcan group gained attention for trying and failing to air a brutal anti-Muslim ad featuring footage of 9/11 in New York TV markets, this category belongs to Buffalo-area developer and America's angriest gubernatorial candidate Carl Paladino. Paladino won an upset primary victory over longtime loser Rick Lazio thanks in part to being even more against the mosque project than his anti-mosque opponent. Paladino promised to blatantly violate the constitution and use the power of the government to block the construction of a religious building, because of The Terror:

Congratulations on your Baity, Carl! Go celebrate with your many Muslim friends.

This commercial from Spike Maynard, challenging Nick Rahall in West Virginia, explains that Representative Rahall is made in China, like our horrible bluejeans. There is also some really classy "Asian" music.

Nick Rahall wants to give your toy-making job to a Chinese person, who will give your children lead poisoning.

Rahall is also the victim of ads worthy of Baitys in the all-purpose anti-Arab category.

Rahall's opponents want you to know that he's Lebanese. Which means he loves Hamas! And he wants to "mobilize" Arab Americans!

I'm not sure why anyone thought this would work, but an anti-Harry Reid group sponsored a Spanish-language ad instructing Hispanic voters to stay home, because Democrats didn't tackle immigration this year:

The ad, of course, was produced by a Republican who opposes Democratic proposals for immigration reform.

The message of these ads from a GOP congressional primary loser in Florida -- featuring a literal "towelhead" -- is that people with dark complexions are probably trying to blow up airplanes.

Then there was Tim James, the Alabama gubernatorial candidate who was sick and tired of people not constantly speaking English everywhere in his state at all times.

Finally, fringe Missouri candidate Glenn Miller receives a special Baity for Old-Timey Racism, for his Kansas City radio ads urging white people to "take our country back" from the Jews, and not, as today's Republicans generally put it, the Muslim Socialists.

Former Roger Ailes aide Larry McCarthy was the man behind 1998's "Willie Horton" ad, the harrowing tale of how Michael Dukakis allowed a black murderer to get out of jail for a weekend of rape and murder. (A sign of McCarthy's brilliance: Horton went by "William." No one called him "Willie" until McCarthy decided it sounded blacker.) That brilliant piece of fear-mongering about a furlough program started under a Republican governor helped George H. W. Bush win the presidency. The lifetime achievement award is named in Horton's honor, but presented to the ad that most embodies the spirit of Larry McCarthy.

And, look at that, McCarthy is this year's winner! McCarthy is the man behind that anti-Mosque ad attacking a random Iowa Democrat! The ad was one of the most shameless of the entire anti-Mosque campaign, cheerfully lying about Imam Abdul Rauf and assigning collective blame for 9/11 to the world's billion Muslims.

But McCarthy wasn't done. This month, McCarthy produced an ad for "Citizens Against Government Waste" designed solely to make Americans resent smug Chinese people, who will own us in 20 years if Barack Obama continues spending government money on infrastructure projects.

The "Chinese Professor" ad is a brilliant return to form for the horrible mastermind behind the original race-baiting campaign ad. We hope Larry McCarthy's Baity helps fill the hole where his soul is supposed to be.

Congratulations to all our Baity winners! But they better not get too comfortable -- 2012 is just around the corner, and I have a feeling that it will be filled with grotesque images of the darkest recesses of the resentful White American psyche.