Scared to death in a Mexican cemetery

I spent the day fascinated by the mystery of Dia de los Muertos. When night came, I discovered what a coward I was 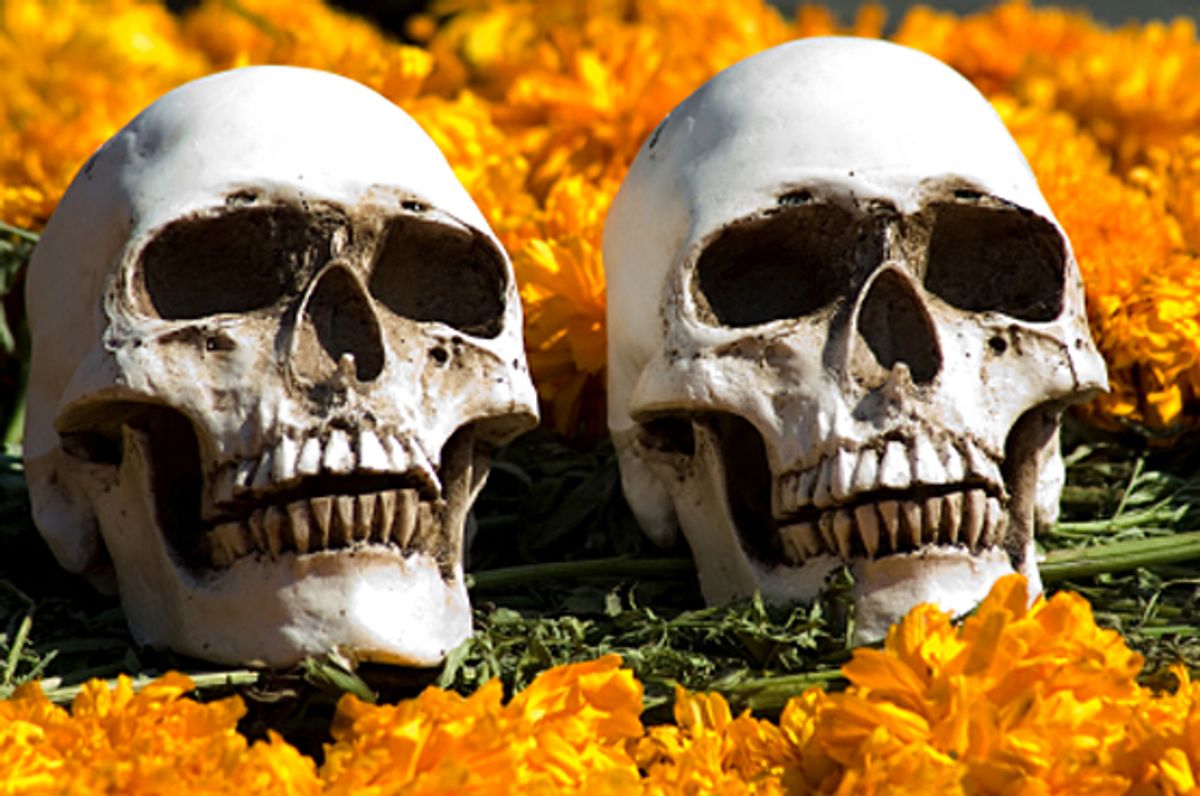 In 1990, I had just turned 24 and was living in El Paso, Texas, with a woman about 11 times better than I deserved. (For the purposes of this account, I'll call her Charlotte.)

Charlotte was a freelance writer and a lover of Mexican culture, its folk art in particular. She was the one who suggested we vacation in Mexico City. We knew a couple of folks down there, including our glamorous friend Dave, who ran the Latin American bureau for a major daily newspaper and -- get this -- had a maid.

We spent much of the week wandering the lovely shaded streets of his neighborhood and debating whether any physical record of our copulation would be detected by the aforementioned maid. (I, being male, argued no.) But Charlotte was determined to escape the city and Dave said we were in luck because we'd arrived in time for Day of the Dead -- Dia de los Muertos, at the start of November -- and did we want to travel north to Michoacán, which just happened to be the capital of Mexican folk art?

So up we went with Dave at the wheel. Our destination was a small city called Patzcuaro, ground zero for Day of the Dead celebrations. Charlotte and I stayed in a room in a private dwelling -- more of a cell, really -- that smelled of kerosene and things decomposed. Charlotte's reaction was a familiar blend of disappointment and suppressed rage.

I got her outside as quickly as possible. The plaza in Patzcuaro was overrun with vendors selling the cempasúchil flower, a bright orange marigold used by the Aztecs to remember the dead. There was a dizzying sampling of food: pumpkin pudding, skulls made of sugar, and loaves of pan de muerto, a sweet bread made with orange peel and anise and adorned with skeletal ribs. While Dave and I stuffed our faces, Charlotte bought perhaps a thousand wooden masks and small sculptures -- most of them brightly painted devils with giant cocks.

I had very little idea what the Day of the Dead was about. I figured it was pretty much Halloween in a sombrero. But the holiday was really about dead people.

The streets and walkways were lined with marigolds, the idea being that the dead would use these to navigate their way back to the homes where they had once lived. But the real action was in the boneyards, where entire families set up camp. It was a jolting tableaux, but also weirdly inspiring. The native attitude toward death struck me as much healthier than ours. While we focused on fistfuls of candy and paranoid rumors about razor blades in apples, Mexicans honored their dead, cooked their favorite foods, picnicked with them in cemeteries. In short, they partied with their dear departed.

We'd been told that we should visit Janitzio, the little island in the middle of Lake Patzcuaro. As dusk darkened into night, we wandered down to the shore and were stunned to find the lake blanketed by thousands of floating candles and flowers, a veil of steam rising from the surface. The inhabitants of the Purépecha Empire, who had settled the region several centuries earlier, viewed the lake as the door to heaven, and it was hard to argue with that view.

Dave remembers hiring a boat to transport us over to Janitzio. But if that happened, the memory is lost to me. In fact, the rest of our visit exists in my mind as something closer to a dream. It was all strange and feverish, the orange flickering and the leering masks and the drunken laughing bodies crammed around grave mounds and laden altars. Years later I would read Malcolm Lowry's hallucinogenic masterpiece, "Under the Volcano," and think: yes, exactly!

What I do remember most vividly from that trip is winding up back in Dave's rental car. There was some cemetery outside of town we were told we needed to see. It was close to midnight by this time.

Whether we found the right cemetery is a matter open to debate. Whatever the case, we found a cemetery, which was in the middle of absolutely nowhere -- no other cars, no other homes, no lights - and surrounded by a 6-foot wall.

To my amazement, this did not deter us. Dave and Charlotte and I stumbled through the pitch and began to scale the wall. We sat on the top of the thing, trying to decide whether to drop down.

And then, out of nowhere, out of the dark, there appeared one or two or perhaps a dozen spectral figures, tall, gaunt, howling with violent intent and suddenly -- very, very suddenly -- hurtling toward us. I wish I could be more precise in describing what I saw, but I couldn't see anything. It was just this murderous wailing in the blackness, growing louder and louder and the hasty thump of footsteps and Dave and Charlotte and I paralyzed on the top of this stone fence.

I suppose it's important at this point to provide a bit of context. First, Dave and I were not brave people. Second, Dave had -- among his other adventures as a foreign correspondent -- been mugged and pistol-whipped in a Mexican cab. Third (and most significant) just a few months earlier, more than a dozen bodies had been discovered on a remote ranch outside Matamoros, Mexico. They had been tortured in satanic rituals that included blood sacrifices and the cooking of human body parts. One of the victims had been an American student on Spring Break.

Everybody who lived on the border back then knew about the Matamoros killings. But I'm sorry to report that I knew more than most, because a friend of mine had covered the killings for the Associated Press. He had told me about the barn where the grisly acts were performed, the makeshift graves, even shown me a photo of the cauldron used to boil body parts.

And thus my reaction, which was purely limbic. The dazed enchantment I'd felt for the past few hours was flushed from my system in a single whoosh of adrenaline. The idea that we were just being spooked by some Mexican teenagers never occurred to me. Instead, it became clear that I was about to die in a horrible, tabloid manner. I flashed to the breathless details from Matamoros: bodies hung from wires, boiled skulls.

Then, to my enduring shame, rather than (for instance) moving to protect Charlotte or telling her not to worry or, at the very least, helping her leap down from the wall to safety, I fled howling into the night.

I am to this day irrationally thankful that Dave did the same thing, somewhat quicker than me, and that he reached the car before me and unlocked the doors and that he remained truly freaked out for several minutes, shivering in the back seat and saying, "What the f***? What the f*** was that?" Dave and I would subsequently admit to one another, sotto voce, that we had nearly soiled ourselves in the moment.

Charlotte was herself spooked, but also disgusted by both of us, and I'm not sure that we ever quite recovered from the sudden revelation of my abject cowardice, which should have come as no surprise to her, but did. She got some great folk art out of the trip, but our relationship did not survive to the next Halloween.