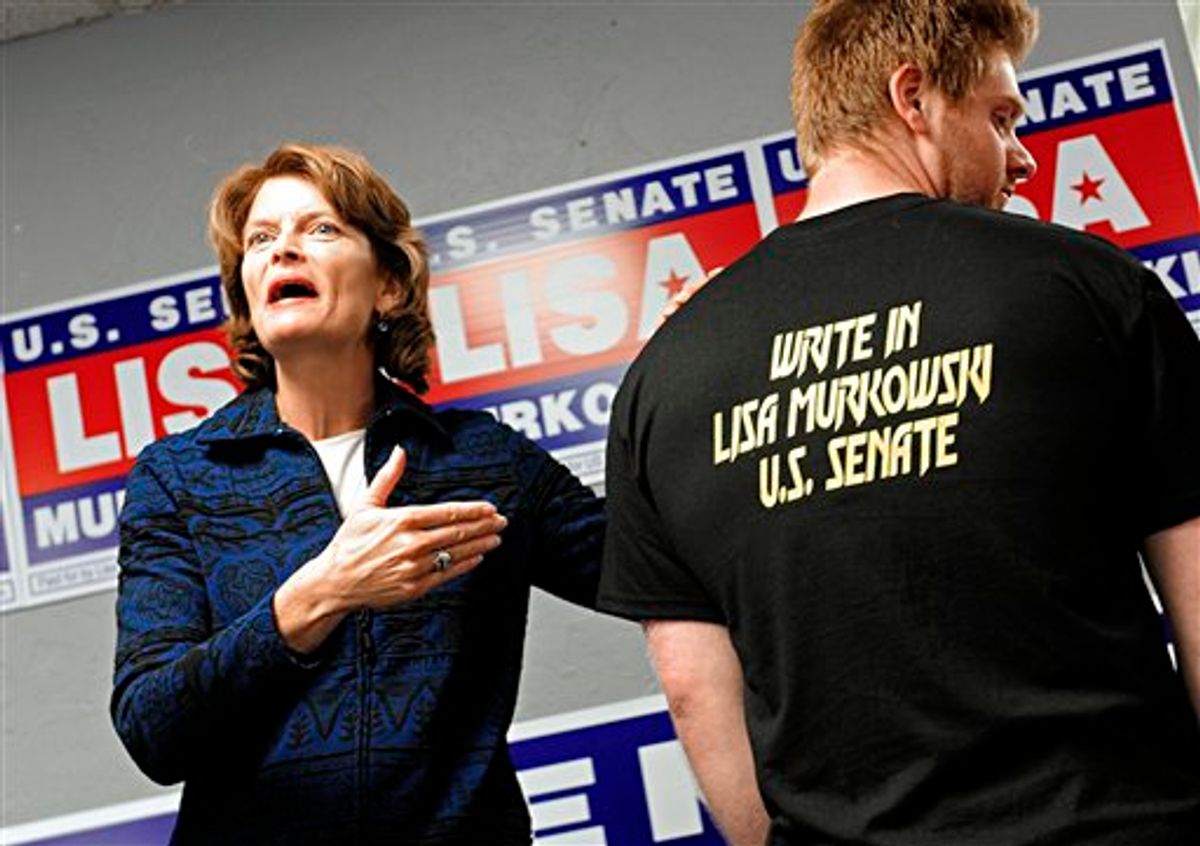 FILE - In this Sept. 24, 2010, file photo Alaska's Republican U.S. Senator Lisa Murkowski, left, shows off a T-shirt worn by one of her supporters, Alex Grundmann, at a rally at the Senator's new campaign headquarters in Juneau, Alaska. 24, 2010. Murkowski, who lost the Alaska GOP nomination to tea party favorite Joe Miller, launched a write-in campaign to try to keep the seat she has held since 2002. Political insiders say the effort probably will fail, but it's hard to predict whether Murkowski would pull more votes from Miller or from Democrat Scott McAdams. (AP Photo/Chris Miller, File) (AP)
--

(UPDATED)In what the website Conservatives4Palin has dubbed "Operation Alaska Chaos," supporters of Republican Senate candidate Joe Miller have launched an effort to stymie would-be Lisa Murkowski voters by registering a large group of citizens as write-in candidates. Murkowski, the incument senator who is running as a write-in candidate after losing in the GOP primary to Miller, won a court decision this week that will allow voters to get a list of certified write-in candidates at the polls (the decision is still facing an appeal).

If the list of write-in candidates contains scores of names, the thinking goes, Murkowski's name will be buried.

KFQD 750 AM radio host Dan Fagan, a Miller backer, urged voters to sign up in an act of “civil disobedience” — defying what he calls an illegal effort by the state.

“Rush on over there before 5 o’clock and register as a write-in candidate. Especially if your last name is Murkowski. That would really help the cause,” Fagan told listeners Thursday afternoon. ...

A list of candidates on the Division of Elections website included more than 40 write-in names late Thursday, but employees at the Anchorage office said other names were still being processed.

Sarah Palin, meanwhile, slammed Murkowski -- or, as Palin called her, "the candidate for the entitlement party" -- at a pro-Miller rally in Anchorage Thursday night.

UPDATE: Murkowski campaign spokesman Steve Wackowski tells Salon that "Operation Alaska Chaos" could cause problems for people in Alaska -- including native Alaskans -- whose first language is not English.

"I think it shows the desperation of Miller's supporters. Quite frankly, I think it's pretty sad," he said. "For someone who is dyslexic or needs assistance, it's dissappointing ... but we're not shocked. "

The Murkowski camp is distributing wristbands, cards, and buttons with the candidate's name to assist write-in voters.