If the Democrats do lose the House, the speaker is a goner. But she might have one last trick up her sleeve 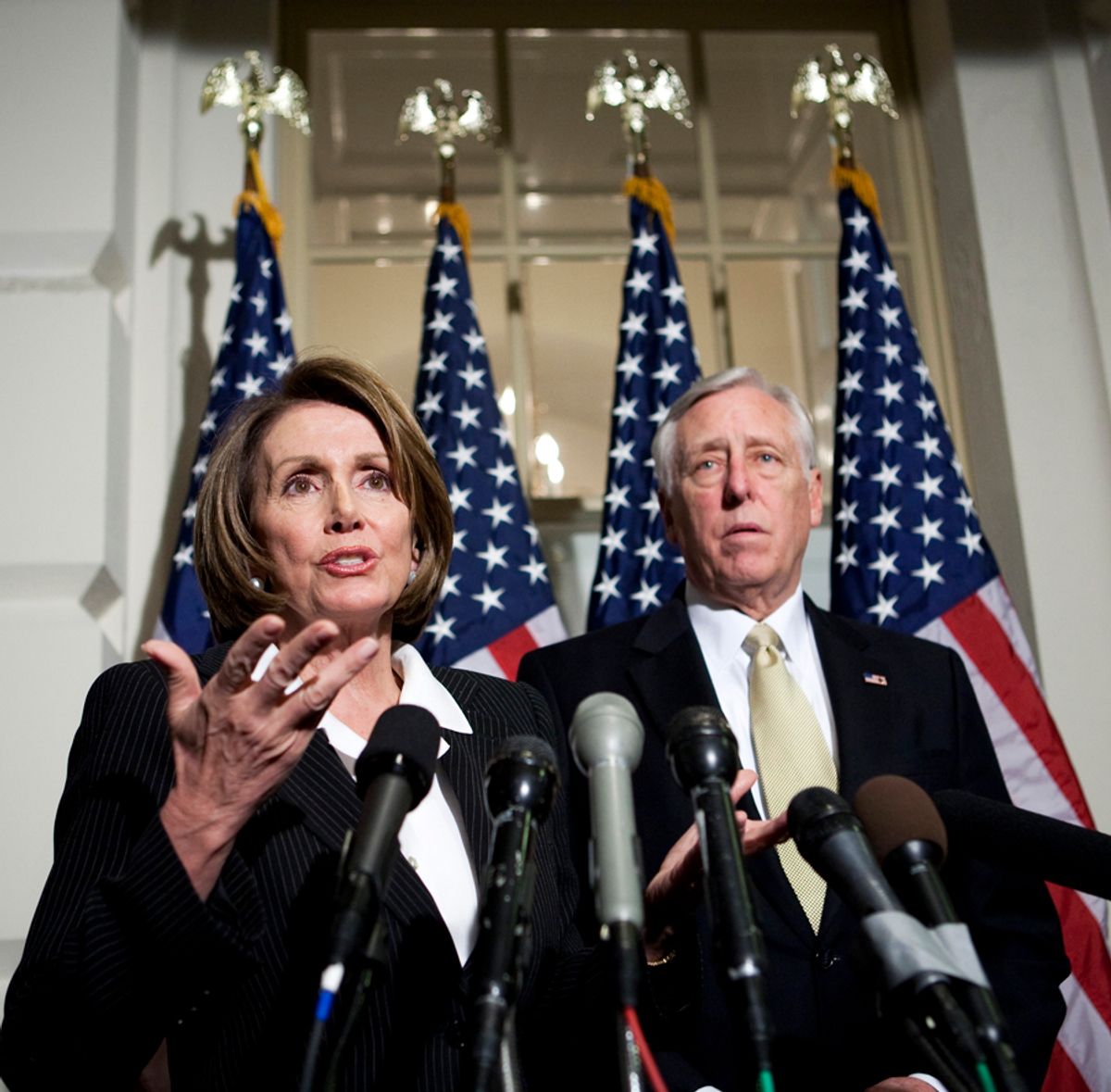 As I wrote a while back, it's clear that Nancy Pelosi will have little choice but to step down as the Democrats' House leader if -- as is now almost universally expected -- they lose their majority next Tuesday. Presumably, she'll also leave the House, much like Republican J. Dennis Hastert did after the 2006 elections, because what would be the point of sticking around?

The assumption, depressing to many progressive activists, has been that she will be replaced by 71-year-old Steny Hoyer, who now serves as majority leader. This is as much a reflection of Hoyer's insider savvy as it is a testament to House Democrats' ridiculously thin bench. Pelosi has not exactly filled her inner circle with ambitious up-and-comers. The closest Democratic leader to fit that profile is 51-year-old Chris Van Hollen, who might be a decent prospect to replace Pelosi if he weren't currently chairing the party's House campaign committee. It's not that the party's showing next Tuesday will be his fault; it won't be. But like a baseball manager, each party's House campaign chairman gets too much credit for success and too much blame for failure. So Hoyer, the thinking has been, is poised to default his way into the Democrats' top slot in the House.

But there may be a glitch. A report in Roll Call on Thursday suggested that John Larson, who is now the House's fourth-ranking Democrat, is toying with challenging Hoyer for minority leader. (All of this, of course, presumes that the Democrats will lose control of the House next week.) The 62-year-old Larson, who holds a safely Democratic seat based in Hartford, Conn., does not exactly stand out as a natural party leader; he's always seemed more like a neighborhood politician who was rewarded for his loyalty to the local machine with a House seat -- which, come to think of it, sort of describes how the former member of the East Hartford School Board came to Congress in 1998.

You might wonder, then, how a fellow like Larson rose to become chairman of the House Democratic caucus. This is where things get interesting, because the answer has everything to do with Pelosi -- and her long-running and occasionally bitter rivalry with Hoyer.

The story begins in 2005, when it became clear that Robert Menendez, then a New Jersey congressman, was going to be appointed to the Senate by Jon Corzine -- who had held the seat since 2000 but was on his way to winning the governorship in that fall's election. At the time, Menendez was vice chairman of the Democratic caucus, the fourth-ranking spot (the party was then in the minority). With Menendez poised to leave, members began jockeying to replace him. For months, it looked like a two-way race between Jan Schakowsky, a Pelosi-ish liberal from the Chicago suburbs, and Joe Crowley, a Hoyer protégé from Queens who enjoyed close ties to the financial services industry. Many viewed the race as a rerun of the Pelosi-Hoyer leadership battle of 2001, which was won by Pelosi, 118-95.

But there was a third candidate in the race: Larson. No one took him very seriously, though. He had few public supporters and refused to reveal his whip count -- probably, most observers assumed, because it was so puny. Crowley and Schakowsky, meanwhile, spent months trying to one-up each other in endorsements. As the January 2006 vote approached, Crowley was considered the slight favorite over Schakowsky, with Larson relegated to the spoiler role.

But the fix was in. What few realized was that Pelosi, despite her close ideological alignment with Schakowsky, actually saw the Illinoisan as an election-year liability. Schakowsky's husband, Robert Creamer, the former director of Illinois Public Action, had just pleaded guilty to a check-kiting scheme. His actions were clearly intended to help save the organization, but they were illegal -- and Pelosi feared that elevating Schakowsky to a leadership spot would undercut her plan to frame the '06 campaign as a referendum on the Republicans' "culture of corruption." When the first ballot was announced, Schakowsky had finished third with just 56 votes. Larson was second, 13 votes behind Crowley. But on the next ballot, with Schakowsky out of the mix, Larson surged past Crowley and notched a 116-87 victory -- a margin notably similar to the 118-95 count in the '01 Pelosi-Hoyer race.

It was clear what had happened, who had made it happen, and why. Even though it had been more than four years since their leadership fight, and even though her grip on the caucus was considered strong, Pelosi was intent on not letting a Hoyer disciple into a top leadership slot. And she was cunning enough to undermine Schakowsky, her supposed ally, out of concern for her party's November chances (and her own dreams of becoming speaker). Larson, an affable and inoffensive member, made the perfect pawn.

It is hard to learn now that Larson is making noise about challenging Hoyer without seeing Pelosi's hand at work. She has never stopped distrusting Hoyer; after the '06 election, she tried to take him out as the party's No. 2 leader, aggressively backing a challenge from John Murtha. (Hoyer survived, comfortably.) And with Hoyer now poised to seize the vacuum created by Pelosi's likely departure, well ... you don't really think she'll let that happen without a fight, do you?

The question is whether, in defeat, she'd have the juice to push Larson -- or anyone else -- over the top. As a lame duck who just led the party through a disastrous election, she might not hold sway with many members. Viewed from another angle, though, her influence might actually expand; most of the Democrats facing defeat next week are from the moderate to conservative end of the caucus -- natural Hoyer allies, in other words. What remains of the Democratic caucus after next Tuesday will, on the whole, be more liberal, not less. They may be more inclined to blame, say, the inaction of the Senate for their party's defeat, than Pelosi herself. If that's the case, then she just might be able to provide Larson with a critical lift -- and to inflict one final, lasting blow on Steny Hoyer, the man  she could never learn to trust.