Just how much damage will the Tea Party do on Tuesday?

Last week, Salon identified the 5 Tea Partiers most likely to muck up the GOP's Senate chances. How are they doing? 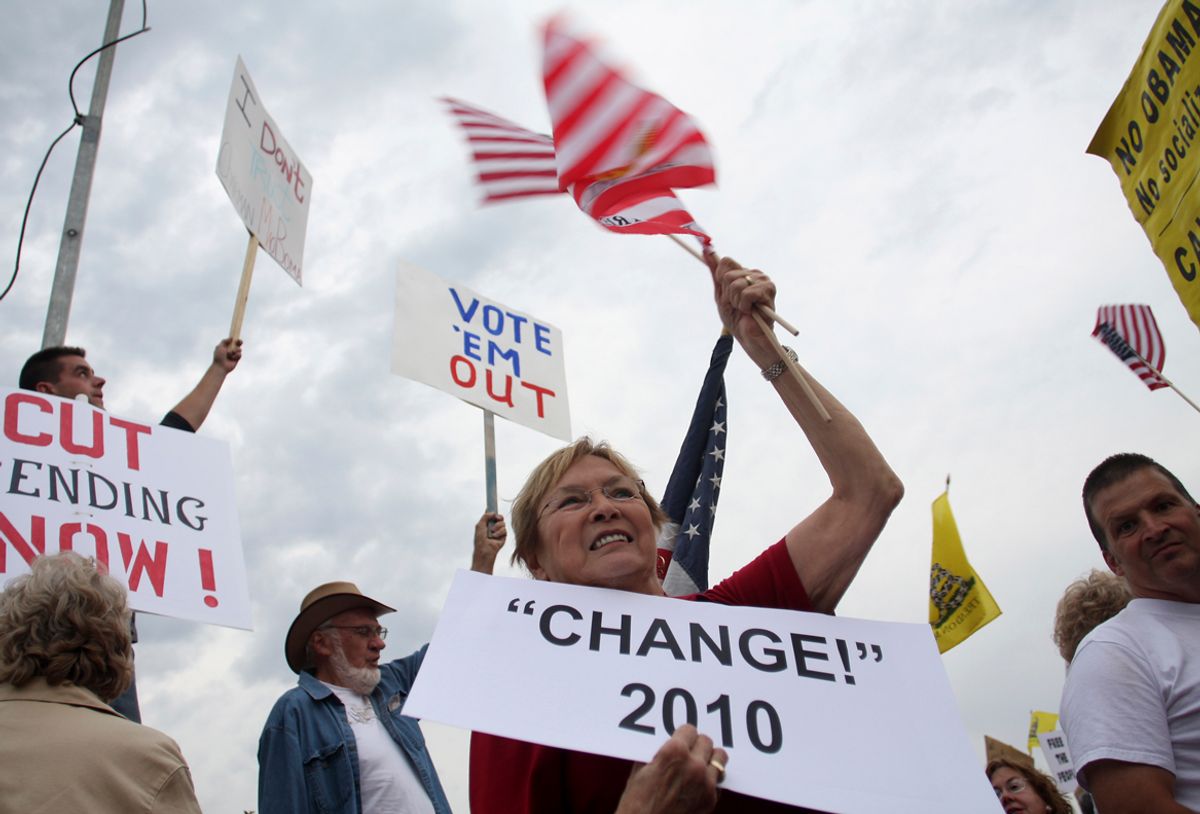 If you want to understand the Tea Party's impact on the GOP's general election prospects, just keep in mind the words of former Atlanta Braves manager Bobby Cox: "Don't confuse favorable outcomes with good decisions." That is to say: Republicans are going to have a really good day on Tuesday, and plenty of Tea Party candidates are going to be elected -- but that doesn't mean the Tea Party has helped the GOP.

Last week, we identified five Tea Party candidates whose liabilities might just be severe enough to cost Republicans Senate races that, in the ridiculously anti-Democratic climate of 2010, they have no business losing. With the election now days away, let's check in and see how the Tea Party Five are doing now. We've ranked them in descending order, according to their likelihood to lose:

5. Rand Paul (Kentucky): Paul was always the most likely of the Tea Party Five to survive, and it looks like he's going to. A week after Democrat Jack Conway launched a Hail Mary TV spot about Paul's collegiate "Aqua Buddha" prank, the GOP nominee's lead has grown to double-digits in some polls. Paul also performed ably at Monday night's final debate -- in the sense that he avoided saying anything inflammatory enough to cause a media firestorm. Of course, the antics of one of his supporters outside that debate did cause a firestorm; but the foot-stomping of a MoveOn activist doesn't seem to be reshaping public opinion. Bottom line: All signs point to a Paul victory.

4. Sharron Angle (Nevada): Last week, we ranked her as the second most likely Tea Party Fiver to lose. But Angle's had a pretty good week, with three new polls showing the same result for her: a 49-45 lead over Harry Reid. This marks the biggest sustained lead Angle has enjoyed during the campaign -- and strongly suggests that Nevada's swing voters, who badly want to throw out Reid, are finally getting comfortable enough with the idea of voting for his erratic, polarizing GOP challenger. That this race has been suspenseful for so long is a testament to Angle's profound flaws; a generic Republican would be pounding Reid by about 20 points. Bottom line: There's a strong chance Angle will pull this out.

3. Ken Buck (Colorado): Buck holds steady from our rankings last week. His race against appointed Democratic incumbent Michael Bennet looks like the closest there is on the board to a pure 50-50 contest. The middle of this month was brutal for Buck, with the news dominated by his comment likening homosexuality to alcoholism and revelations about his questionable conduct as a district attorney during a 2005 rape investigation. But the public's memory can be short, and if Buck can avoid any last-minute slip-ups, he might just slip through. Bottom line: It's a toss-up.

2. Joe Miller (Alaska): What a terrible week it's been for Miller, who clocked in at No. 4 in our previous rankings. Already hobbled by his bizarre campaign trail antics -- including his declaration that he wouldn't answer questions about his past and his campaign's "arrest" of a reporter -- Miller was further wounded on Wednesday when, thanks to a judge's order, e-mail records from his work as a borough attorney in 2008 were released. It quickly became clear why Miller hasn't wanted to talk about his past: He was forced to admit in one e-mail to lying to his superiors about conducting political work on borough computers. By the end of the week, a poll showed Miller falling to third place -- with Democrat Scott McAdams, previously written off as an also-ran, surging to second place, just 5 points behind write-in Lisa Murkowski. There is now a real chance that the Democrats will pick this seat up -- a shocking occurrence when you consider that Alaska is probably the most conservative state in the union and that 2010 is the best Republican year since (at least) 1994. Bottom line: Miller looks like a loser; the question is whether Democrats can actually notch a pickup -- or if Murkowski can pull it out on write-ins.

1. Christine O'Donnell (Delaware): We are 99 percent sure that O'Donnell will lose this race, but a sliver of doubt was introduced by two events this week: 1) Gawker's decision to run an anonymous 28-year-old man's (well, he didn't stay anonymous for long) account of a drunken night he supposedly spent with O'Donnell back in 2007; and 2) the Friday release of a Monmouth University poll that shows O'Donnell moving within 10 points of Democrat Chris Coons -- an improvement from the 19-point deficit she faced in Monmouth's last poll. The risk for Democrats is that the Gawker story could prompt a surge in sympathy for O'Donnell. It's doubtful that this will be enough to put her over the top, but a 10-point gap is a lot narrower than 19, so we can't completely rule it out. Bottom line: Despite Nick Denton's best efforts, the Democrats hang on to Joe Biden's old seat.