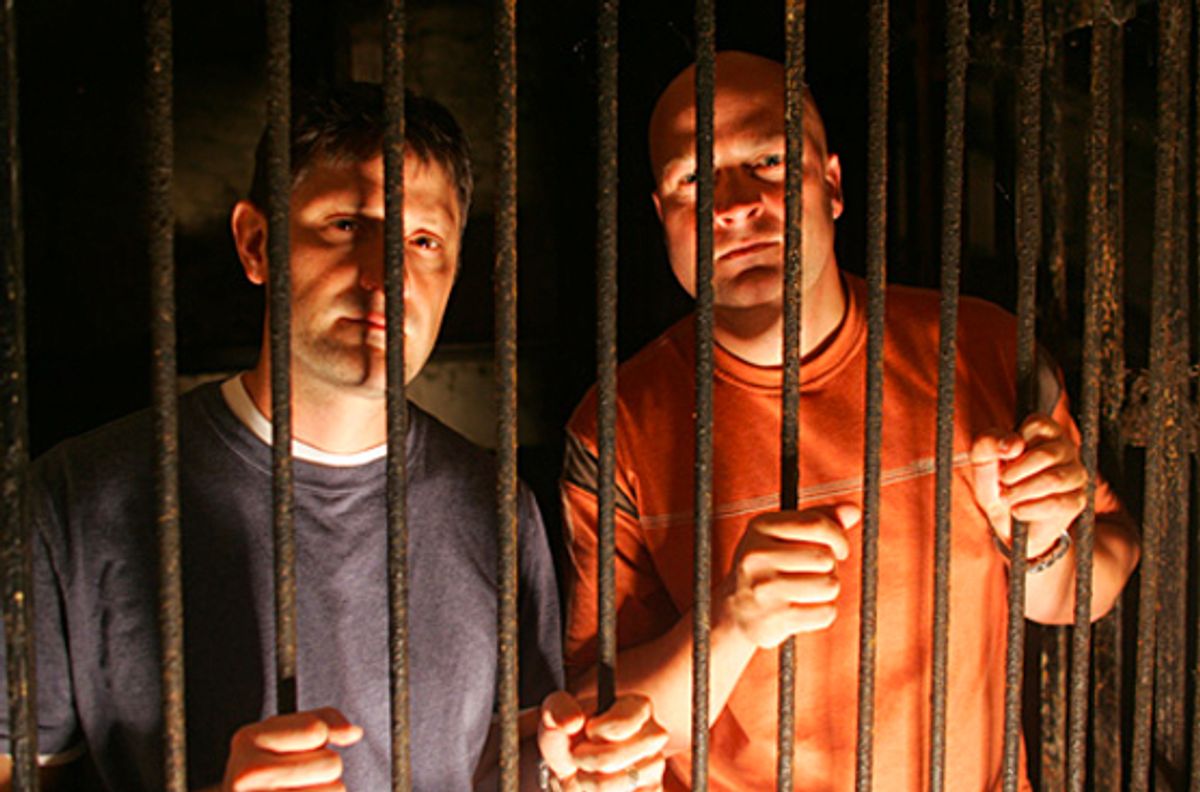 A still from "Ghost Hunters"
--

In butchered Italian, Nick Groff tells the ghosts of Poveglia, a creepy island off the coast of Venice, Italy, to "use his energy." A faint rap is heard. Zak Bagans, his fellow ghost hunter, hunches over and grabs his stomach. It looks as though he may vomit.

A hiss-like sound -- the noise heard just moments before -- is played back. It was all the proof the two ghost hunters needed.

"I said, 'use my energy,'" Groff says, his tone now professorial, "and then all of a sudden your energy was drawn from your body at the exact moment. And then -- at the same time -- I heard that weeeird voice."

Bagans struggles to lift his head. "It's using my energy," he whimpers.

Bagans and Groff are hosts of "Ghost Adventures," one of the most popular programs on the Travel Channel -- and one of about a dozen similar reality TV ghost-hunting shows on television today. Over the past decade the ghost-hunting genre as a whole, led by series like "Paranormal State," "Ghost Hunters" and "Psychic Kids: Paranormal Children," has become a virtual fixture on cable television. The shows follow a basic formula: Everyday Joes -- sometimes aided by a psychic, sometimes not -- travel to supposedly haunted locations, wait for the sun to go down, and spend the night freaking each other out. It may seem hilariously contrived, but it's some of the most popular stuff on TV today.

Since they hit the air, these shows have raised the profile of paranormal investigation, turning series investigators into minor celebrities, and spurring a growing interest in hauntings around the country. But they've also made some unexpected enemies: real-life paranormal researchers.

Granted, it's never been easy for those who choose to seriously study ghostly or psychic phenomena. Mainstream science views them with deep suspicion -- a contempt fueled by what many see as a gaping lack of evidence. No definitive proof of otherworldly phenomena has ever been found. Yet parapsychologists -- a handful with Ph.D.s and fortunate enough to have found a home at an academic institution, the vast majority self-taught but equally dedicated -- continue to search for evidence that paranormal phenomena really do exist.

They've been at it for some time now, in fact. In the late 1800s men like Harvard psychologist and philosopher William James risked their reputations by studying oddities such as "crisis apparitions," prescient events where final farewells or messages from a friend or loved one are claimed to be received in dream form before it is known they are dead. In the early-to-mid-1900s, Joseph Banks Rhine helped to pioneer the study of ESP by founding a (now-defunct) parapsychology lab at Duke University. Today, laboratory-controlled random number generator tests -- experiments where a subject sits in front of a number generator and tries to "will" one number over another -- seem to suggest that the mind has an unknown ability to affect reality.

Parapsychology, its adherents say, is a little like alchemy before chemistry came along. Don't squash it. Interviews with multiple parapsychologists, however, suggest that reality TV ghost-hunting shows are doing just that by exacerbating the woes that have historically plagued their field.

Many parapsychologists derive a healthy part of their income, and research funds, from speaking engagements, but now those are beginning to dry up. Loyd Auerbach, a field investigator with a quarter-century of experience who has appeared on "Larry King Live," "The Oprah Winfrey Show" and "Late Night With David Letterman," is one of a number of parapsychologists who have felt the squeeze from the reality TV ghost-hunting shows. In 2006 he took part in and was paid for 14 events in the Halloween season alone. The next full year, that number dropped to five. The year after that, to two. And then, in 2009, to one. This is the new reality for Auerbach, a man once dominant in his field. So far in 2010 only one paying gig has come his way. "I was making a good part of my living lecturing and doing events. Now the TV stars are getting all the lectures," he said. "It's been difficult to pay my mortgage."

Dr. Barry Taff, an investigator who has consulted for the CIA and took part in a now defunct parapsychology lab at UCLA, has likewise seen a drop in the number of cases referred to him. "Since these shows littered the landscape, calls coming in for investigations have almost disappeared," he said. "We used to get 20 to 30 a year. And then it just dropped dead. Last year, literally, we did not go on one single case. Not one. It's depressing!"

But the effect of the shows may reach farther than the preexisting parapsychological industry. Dr. Andrew Nichols, a leading expert in poltergeists who researched the phenomenon for the U.S. Army and who co-received the only grant ever awarded to study alleged hauntings, believes that they also push questionable science on the TV-watching public. Nichols pointed out a laundry list of what he calls bad science in the series: Investigations always take place at night (Why would ghosts come out only then? How can you be a good observer in the dark?); investigators use unproven, "scientific seeming" instruments like magnetometers, which have ultimately failed to produce replicable results; they suggest that every odd sound, every "cold spot" and every "orb" (which have been explained away as side effects of digital cameras) are signs of ghosts. More generally, as Nichols put it, "they just run around like little girls."

Not surprisingly, the shows have also been accused of fakery. Perhaps the biggest pratfall in paranormal TV history belongs to the perpetually possessed psychic medium Derek Acorah, of the British show "Most Haunted," who was disgraced after a cast member tricked him into communing with fictionalized ghosts. Critics took aim at the genre's most popular series, "Ghost Hunters," after a 2008 Halloween special in which a ghost purportedly tugged an investigator's collar; many believed a trick string was employed. The incident prompted Buffalo resident Ron Tebo to found Scifake.com, a website that polices paranormal TV. "You had 5 or 6 million people glued to the TV and SyFy decides that they're going to pull a number on all of us," he said.

Furthermore, says Benjamin Radford, managing editor of the Skeptical Inquirer and a researcher who performs his own science-based investigations into supposed hauntings, the shows give people a template for inventing hauntings in their own house. Radford, who thinks most parapsychologists do shoddy research, has been able to find rational explanations for each haunting he's investigated. "I deal with people who are convinced their houses are haunted," he said. "They're ordinary people who for whatever reason believe that their home is haunted. And when I talk to them and when I do investigations, one of the things I ask is, 'Why are you interpreting what you're experiencing as a ghost?' Invariably the answer is, 'I watch "Ghost Hunters."'"

Parapsychology has always been hampered by a lack of funding and a shortage of academic departments dealing with parapsychological phenomenon. In the past there have been stabs at such programs in the United States, but they've had much more success in Europe, where there are at least a few, like the Koestler Parapsychology Unit at the University of Edinburgh. In the '80s, for example, a short-lived parapsychology master's program existed at John F. Kennedy University in Orinda, Calif.

Without a strong body of degreed parapsychologists to speak for the field, parapsychologists worry that the shows further promote an image of the researchers as bumbling amateurs rather than rigorous professionals. "We get painted with the same brush," said John Palmer, a Ph.D. who runs the Rhine Institute, formerly affiliated with Duke University and one of the only parapsychological institutes in the country. It is the bumbling amateur image of the field that skeptics and mainstream scientists dig into. For some, the stigma is so strong as to dissuade any study in the field whatsoever.

Indeed, parapsychologists name the professional stigma associated with their field as one of the reasons it hasn't taken off (there are likely other reasons, of course). Without the support of academia, they say, young, serious-minded researchers interested in parapsychology struggle to receive grants, attain academic positions and achieve tenure. Harris Friedman, a professor at the University of Florida's psychology department, experienced the opprobrium associated with psychic study firsthand. He fell victim to what he calls the "reverse file drawer problem." "Many skeptics of parapsychology use the excuse that there's a 'file drawer problem' where all the negative findings get buried and only the findings that support parapsychology actually make it toward publication," he said.

As a doctorate student teaching in Fort Myers, Fla., Friedman conducted a study on psychic capacity in grade-school children -- a study that he says yielded compelling results: Children who claimed they liked each other had a better-than-odds chance of guessing cards than children who said they did not like each other. But he was grounded when he showed his findings to his dissertation professor. "He said 'Look, if you publish this forget having any sort of an academic career.' So I buried the data." Even so, Friedman, who has since gone on to have a fruitful academic career in alternative psychology, can see some benefits to the otherwise noisome ghost-hunting shows.

"They're tapping into a feeling of awe, a feeling people have that the world is not just mechanical," he said. "They open people up to deeper possibilities, and in this regard they have a good and bad relationship to parapsychology."

Awe is indeed what makes these shows tick, what keeps eyes glued to the screen: Ghosts are humankind's most popular and storied supernatural belief. We want to be scared, we want to suspend our skepticism; some among us even use the shows to make the leap into belief, and in this sense the shows possess an almost religious quality. The same ideas drive the field of parapsychology. For a number of reasons, the scientific hunt for the world beyond has remained a backwater discipline, and for a field of study strange enough as it is, parapsychology today finds itself in a strange position, stuck in between a set of uniquely American extremes: belief cheapened to the point of farce and a rigid, almost inhuman refusal to see anything beyond the material world. It's an odd thing. Or is it?

Vinnie Rotondaro is a writer living in Brooklyn and a reporter for the New York Daily News.

Vinnie Rotondaro, a Catholic, is a writer living in Brooklyn and Editor-at-Large at Narratively.