The Rally to Restore Sanity: Nonpartisan, but political 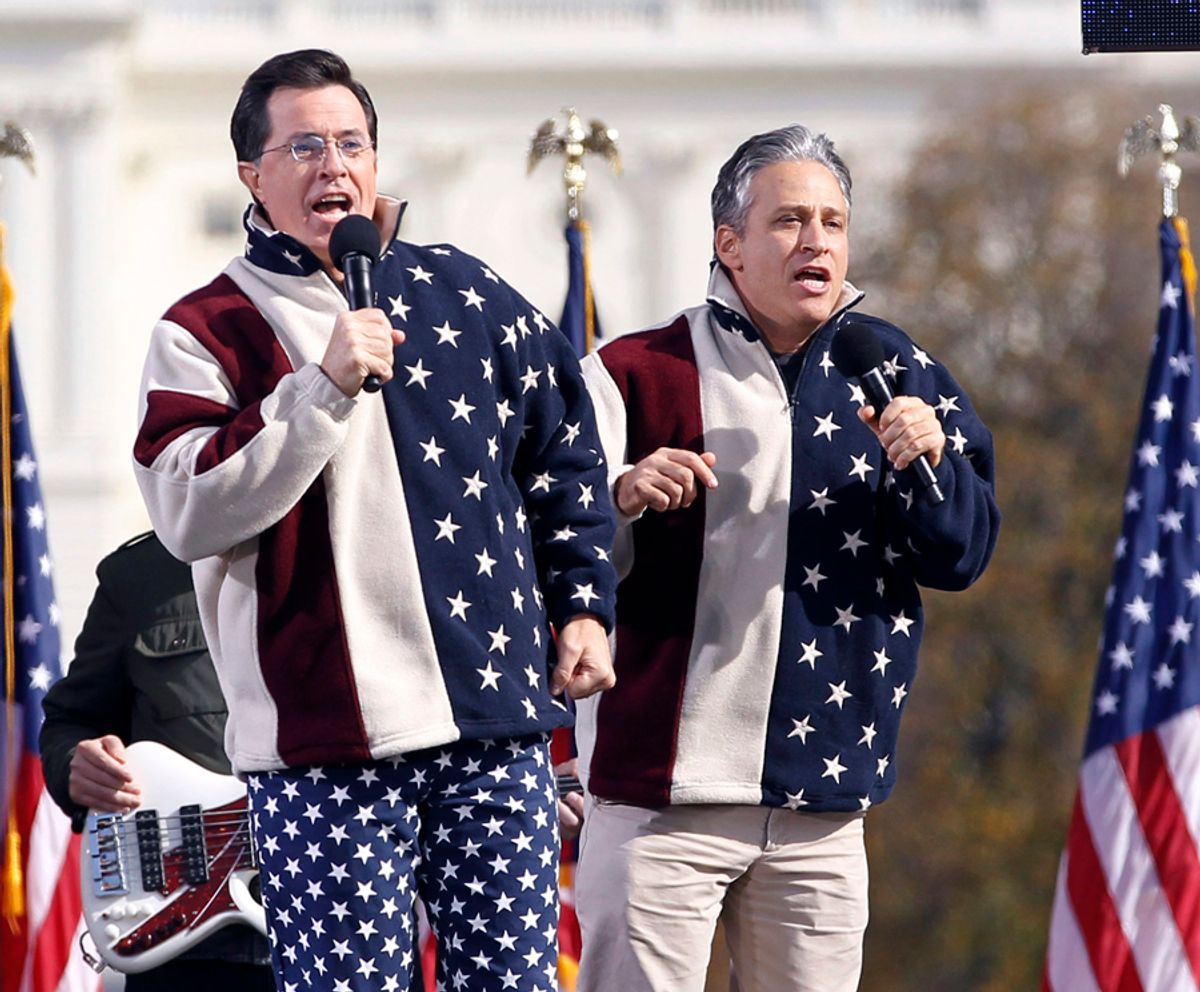 Jon Stewart didn't lie. His "Rally to Restore Sanity" was aggressively non-partisan. But while none of the participants had anything to say about the upcoming midterm elections (besides a brief shout of "vote!" by American treasure and '60s civil rights marcher Tony Bennett), there was a quiet political message. And, honestly, it's a message that Democrats should be happy with.

An endorsement of civility and reason is basically an endorsement of Barack Obama. "Reason and civility" are practically the Democratic party's platform. The rally was a call to keep fighting for the things that make educated young liberals support Democrats in the first place.

The Republican midterm strategy is based on anger and resentment. A celebration of the idea that basically everyone's pretty OK at heart is a pretty liberal message. Some of the comedy (most of it involving Stephen Colbert) was explicitly against Republican midterm fear-mongering campaigns involving the demonization of Islam -- like bringing on Yusef Islam and Kareem Abdul-Jabbar to drive home the apparently controversial point that Muslims are nice, pleasant people.

Stewart's final monologue -- his serious, Mr. Smith moment -- was less a political message than an extended bit of media criticism. It was a sequel, really to his famous "Crossfire" appearance. 24-hour media doesn't cause problems, Stewart argued, but its existence makes solving them that much harder. The mainstream press has been this rally's greatest critic (Stewart's too political/too naive/too serious/hurting his "brand") and they ended up being -- much more than, say, Glenn Beck -- its biggest target. The nonpartisan establishment press is a thousand times more cynical than Stewart the irony-drenched comedian, and that's in part why they hate it when he gets "preachy."

"The only place people don't work together to get things done," Stewart said, "is here," gesturing to the Capitol, "and on cable TV."

The metaphor Stewart used to prove his point about the essential reasonableness of the American people? Cars merging into single lanes to enter tunnels. Trust me, it actually worked. (Though perhaps it works better if you live on the eastern seaboard, and drive.)

What about the guys who drive up the shoulder and try to cut in at the last possible second? "That individual is rare, and scorned, and not hired as an analyst."

While there will be plenty of (completely reasonable) disagreement about this rally's goals and whether it helped or hurt the progressive cause (and whether or not anyone involved even had a responsibility to help the progressive cause), there's already been a bit of aggressive point-missing by a couple liberal critics. (One recurring topic among disgruntled progressives on Twitter: MoveOn's urgent need for phone-bankers. As if, if it weren't for this annoying rally, these hundreds of thousands of people would've spent the weekend before Halloween canvassing.) Stewart occasionally preaches Broderian false equivalence, and it's easily his most annoying trait, but while the Broders beg for a Serious Grownup to rescue idiot Americans from their own passions, Stewart's message is basically that all Americans have the ability to just not be assholes, and the press has a responsibility to not reward being an asshole.

(The only actual moment where everyone's worst fears about the event came true was the horrible Kid Rock song about how influential millionaires can't do anything to make the world a better place besides care, a bunch, about war and stuff.)

As a piece of politicking, the Rally to Restore Sanity got a couple hundred thousand young liberals excited about sincerity and inspired about their nation on the eve of the midterm elections. I can't really see a downside, unless you think tepid criticisms of MSNBC's tone will convince liberals not to vote this Tuesday.