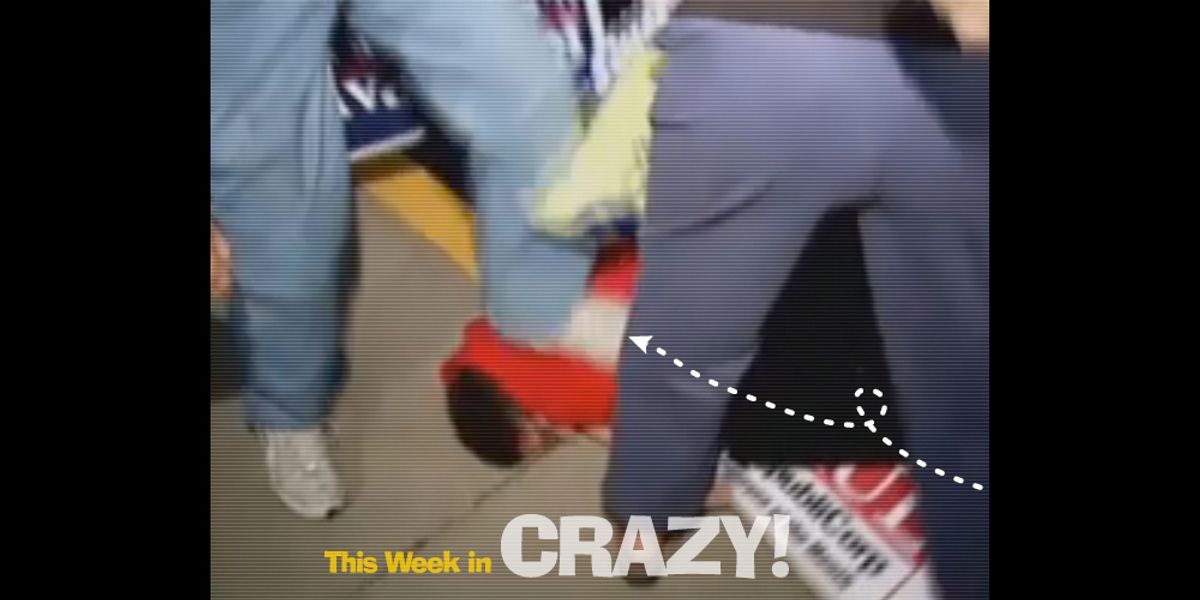 Just a few short days ago, Kentucky Republican candidate for U.S. Senate Rand Paul was happy to be seen with Tim Profitt, the volunteer Bourbon County campaign coordinator for the Paul campaign. Profitt's name was listed prominently in a full-page Rand Paul ad. The same day that ad ran, though, Profitt kinda-sorta stomped on a woman's head. And it was caught on tape.

(In case you haven't seen this yet, it's not very pleasant.)

The victim is 23-year-old Lauren Valle, a MoveOn.org activist who was attending Monday's Senate debate to confront Paul for his fealty to corporations. Paul's supporters, apparently, thought that made her a threat, and so they threw a slight 23-year-old woman to the curb and stepped on her neck and head, to restrain her from ... briefly annoying Rand Paul. Valle suffered sprains and a concussion.

(Conservative bloggers quickly called Valle various horrible things and even hyped a second video that totally proved that Valle ... was thrown to the ground because she tried to bother Rand Paul on his way into a debate.)

The stomper was rather quickly revealed to be Profitt. He admitted as much to the Associated Press by Tuesday, which was probably a mistake, because that's basically admitting to criminal assault.

Profitt immediately chose option "make things worse" once he realized that he was now known as "the guy who stomped on a woman's head." He apologized -- if the tape made it look bad. Because, he said, it totally wasn't! It was a gentle grinding of a woman's head into the pavement, with a shoe.

Then Profitt took things one step crazier: He declared, on local TV, that he was owed an apology from Valle.

Yep: "I would like for her to apologize to me, to be honest with you." Profitt did not want to appear on camera, because that cat isn't out of the bag.

Valle, for the record, did not apologize. Instead, she wrote Profitt a letter. It is, uh, classy.

Mr. Profitt, You have asked that I apologize to you. Perhaps this is not the apology that you are looking for, but I do have some things to say.

I have been called a progressive, a liberal, a professional agitator. You have been called a conservative, a Republican, a member of the Tea Party movement. Fundamentally and most importantly, you and I are both human beings. We are also both American citizens. These two facts, to me, are far more meaningful than the multitude of labels that we carry. And if these two facts are true then it means we are on the same team.

I have not been for one moment angry with you and your actions. Instead I feel thoroughly devastated. It is evident that your physical assault on me is symptomatic of the crisis that this country is struggling through. And it seems that I will heal from my injuries long before this country can work through our separation. Only when we decide let go of our hate, our violence and our aggression will we be able to communicate to each other about the issues that divide us. Right now, we are not communicating, we are stomping on each other. No one can ever win, no one can ever be heard, with violence.

You and I, as fellow citizens, and we, as a country, have a choice. Either we choose to continue the cycle of inflicting violence upon each other, screaming at each other, insulting each other and putting one another down or we and find a way to sit down and start listening to each other. We'll see how far we get. We are all viciously and vociferously feeding a fire that will only burn us down together. We must reach inside ourselves and make space for each other. We must forgive each other. We must believe in our capacity for transformation. The moment we choose compassion and reconciliation is the moment that we will begin to move toward freedom. There is no other way.

I believe that you should be held accountable for your actions but I also recognize the incredibly negative impact that the consequences must be having on your life, and I wish you all the best as you yourself heal from this. Violence hurts everyone.

Profitt has not yet responded. He's probably consulting with Ginni Thomas on the best time to leave Valle a voice mail.